Sunday City Guide: What to do in Taipei, Taiwan

It is no secret that Taiwan’s legitimacy as a nation is a bit of a global controversy – but there is no debate that Taipei is an incredibly welcoming, progressive, clean and exciting city.

Taiwan is an island nestled off of the south coast of China – it boasts some of the best weather, greenest jungles, and friendliest people in the whole of Asia. Since it has been industrialized far more recently than some of its neighbors (like Hong Kong or Beijing), Taipei’s infrastructure has ease of access and functionality at its core. The metro system and bus systems are vast and easy for foreigners to use (I recommend picking up a transport upon arrival – so simple to use, they’re called Easy Cards!). And the majority of locals speak enough English to help you out when you’re lost.

Though located pretty close to the equator, Taiwan’s weather is relatively seasonal. It is a humid, subtropical climate – the summers are long and muggy, the winters are short, chilly and foggy. It’s difficult to pin “rainy season” to just a few months in Taiwan – it gets pretty soggy from February to May, but peak typhoon season is from June to September!

“Typhoon season” can sound pretty scary – but don’t let that deter you from visiting Taipei! There are plenty of awesome indoor attractions you can visit (like the National Palace Museum), or you can spend an entire day in a second-run movie theater – you buy one ticket for about $5USD, and can see as many movies as you would like throughout the day! (My favorite second-run theater is two blocks south of the Xinye Anhe station on the red line on Tonghua Rd.)

June, July, and August are peak tourism months in Taipei. While it never gets over 40°C (100°F), the humidity stays at about 75% consistently throughout the year, so get ready to sweat! Luckily the city has the perfect balance of parks, shopping, boardwalks and cute cafes/restaurants, so you can soak up the sun for the morning, and then pop into a pleasantly air conditioned restaurant for lunch!

If you’re more flexible about the time of year you visit Taipei and are more interested in getting an authentic cultural experience, planning a trip around one of the many famous festivals (like the Dragon Boat Festival, the Moon Festival, or even Chinese New Years) would give you a once in a lifetime experience immersed in a local celebration!

Top Things To Do In Taipei

There is something for everyone in Taipei. Whether you love to shop, hike, sightsee, relax or eat, it’s easy to get swept up by this beautiful city and never want to leave!

Shopping lies at the heart of this cosmopolitan city’s culture. There is a mall for every mood – high end, strip malls, artisanal, open-air… You name it! (And pro-tip: the ground floors of every mall are going to host the more affordable stores – as you ascend each story, the higher-end the stores are going to become!)

Beyond shopping malls, a quintessential shopping experience you have to have while visiting Taipei are night markets. Usually encompassing a several block radius, you can get the perfect mix of street food, cheap clothes and fun souvenirs at a night market – and they operate every night of the week! The most famous night market is located in the Shilin District of Taipei (if taking the metro’s red line, you’re actually going to want to get off the stop before Shilin – called Jiantan!)

It’s easy to spend a day (or two) exploring the historical and cultural attractions that Taipei has to offer.

If you ride the brown metro line all the way to the end, you can visit an array of Taipei’s hidden, must-see gems. Right outside of the station is the Taipei Zoo, which happens to be the largest zoo in Asia! And just beyond the zoo is the beginning of the Maokong Gondola – a beautiful cable car ride whose final stop drops you in the middle of several traditional tea gardens.

Similarly, tucked away near the end of the red line (at the Beitou stop, change trains to the one-stop pink line to Xinbeitou) are the Beitou hot springs. You can choose if you’d like to go to free, cheap or swanky hot springs – and you can even stay at hotels in this district that have hot spring facilities on-site!

If you are looking to have a more high-energy day in the city, renting a youBike (public bicycles with stations located all over the city, usually close to metro stops) is an awesome alternative to taking public transportation. You can use your credit card for one-time use, and the first 30 minutes are free!

Taipei’s skyline is one of the most beautiful skylines in the world – the high-tech industrialism juxtaposing against the lush, green hills of the surrounding jungle is a view you cannot miss. Elephant Mountain (Nangang District Hiking Trail) is an easy hike (composed almost exclusively of stairs, so prepare to sweat!) frequented by both tourists and locals. The ascent takes about 25 minutes. There are two main vantage points once you’ve reached the top of the mountain – a quick stop where you can climb on top of the famous rock for a great photo, and a covered area where you will often see a slew of photographers snapping shots of the one-of-a-kind view.

Where to Stay in Taipei

Compared to some its Southeast Asian Neighbours, accommodation doesn’t come cheap in Taipei. Average hotel costs are between $100-$140, and hostels average about $15 a night.

In lieu of the Tourism Bureau’s push for a greener hospitality industry, several big-name hotels throughout the city have signed an agreement to become more sustainable options for tourists!

The easiest area of the city to stay in would be near Taipei Main Station (the central hub for the metro, high-speed rail and bus systems). But excellent accommodation options are scattered throughout the city’s most famous districts. Below are options for a range of budgets:

Find and book these hotels on our favourite accommodation search website: Booking.com

Another great alternative for accommodation in Taipei is Airbnb, where private rooms start at $30 and offer a unique way to experience the city from a more local perspective.

Don’t have an Airbnb account yet? Sign up now and receive a discount to put towards your first Airbnb stay!

Where To Eat and Drink in Taipei

Taiwan has been voted one of the best food destinations in the world. Taiwanese food is often served in small portions, but with the intention of you buying several different dishes and feasting on as many of the local delicacies as you can.

For an awesome – albeit, a little pricey – sit-down meal, Din Tai Fung is the best in the biz. It started as a single, small restaurant in the Xinyi District of Taipei, and has grown into a global chain while retaining its traditional Taiwanese spirit.

Night markets are the best place to sample as much street food as you can eat in a night – and they are by far the cheapest dinner option in the city. For less than $3 you can try barbecue corn, traditional fried dumplings, or the infamous stinky tofu!

Taipei can definitely be categorized as a quieter city, but that does not mean there is no nightlife! The Ximending District of Taipei is extremely popular among young locals – and is also unofficially recognized as the center for the LGBT social scene! For dancing, the two most popular clubs in the city (for locals and tourists alike) are Wave and Babe18.

How Much Time Do You Need In Taipei

In Taipei city alone, you could easily spend 5 days and cover all the major tourist attractions and activities.

There are also plenty of day-trip opportunities that are easily accessible via public transportation (cheap buses, pricier trains). Jiufen and Keelung are two culturally rich, more traditionally Taiwanese destinations along the north coast – you can both fit into one day.

If you’d like to venture further out into Taiwan (maybe spending the night outside of Taipei), Toroko Gorge National Park is one of the many famous natural beauties this country has to offer. Within the national park, you can see the gorge itself, as well as temples, a museum, and aboriginal villages! The cheapest way to get around the gorge is via the cheap shuttle circuit that covers the entire park; the most flexible option is renting a motor scooter for yourself and buzzing through the gorge at your own pace! 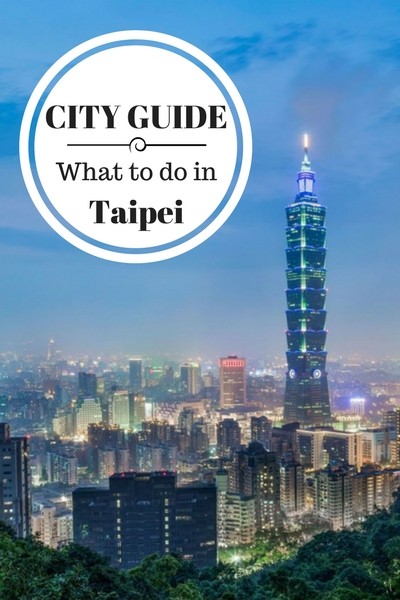 Have you ever been to Taipei? What tips and advice would you give to first-time visitors?

Harlee Keller is a California native turned digital nomad. She’s currently traveling full-time and has visited over 40 countries in the last 3 years. She’s passionate about photography, cultural immersion, and nonprofit work in women’s rights and education. You can connect with her via Instagram.

2 thoughts on “Sunday City Guide: What to do in Taipei, Taiwan”