Coca Tea (Mate de Coca), the fuel of the locals in the Andes of South America

Coca plant has been cultivated by ancient civilizations in Peru, Bolivia, Colombia and Argentina for many centuries. The consumption of the coca plant, which is usually chewed or brewed for tea, is a common everyday practice in the Andes, and is considered a sacred tradition among the indigenous communities. Yet in North America, the coca plant has been seen as an enemy and the main culprit of the War on Drugs.

Is Coca Plant a Drug?

The coca plant is listed in Schedule I of the UN Single Convention on Narcotic Drugs and has been illegal in many countries in the Western world since 1961.

However, it’s important to make a distinction – coca plant is not an equivalent of cocaine. Though it does contains some alkaloids, their effect can not be felt without a process of chemical extraction. The stimulant properties of the coca plant, consumed on its own, may be compared to that of a moderately strong cup of coffee or tea.

To activate the alkaloids the locals chew the coca plant with lime, baking soda, or ash. The indigenous groups also use calcium carbonate, which they obtain by crushing sea shells, burning them and storing them in the traditional container, referred to as poporo.

How Coca Tea is Made

Coca Tea is usually cultivated on farms throughout the Andes, where the plants can reach full maturity within 12-24 months. When the plants are ready, the men usually harvest the leaves, and women play a role in processing them. The traditional way is still rather labor intensive. The leaves are put in a woven bag with hot rocks and are shaken to dry. Once dry, the leaves are scattered on a table or cloth away from direct sunlight and left to air dry until they are ready to be consumed.

It’s easy to tell factory produced tea from locally made batches. Since the latter is often sold is small plastic or fabric bags, while the former is packaged into familiar coca leaf tea bags.

The benefits of coca leaves and coca tea are attested to by the locals, and that was enough to convince us to jump on the Coca Tea bandwagon in Colombia.

Coca Tea was first recommended to us in Bogota, where Oksana experienced mild signs of altitude sickness. The locals swear by it, as coca tea has been known to help relieve altitude sickness, ease indigestion, regulates blood glucose, and assist with energy production. Some say it also suppresses hunger, thirst, pain, and fatigue.

Where to buy Coca Leaf Tea

Coca tea was easy to find in Bogota. It was sold in a familiar prepackaged tea bag format in many mom and pop shops across the city. Many shops were also selling them by the cup, often for less than $1.

While tea and tea leaves are the most popular format for coca consumption, a number of personal care products, everything from lotion to oils, as well as flour made with coca leaves have also started popping up on store shelves in the city.

Oksana’s altitude sickness signs didn’t go away after just one cup of tea, but given the cold weather, we didn’t mind drinking Coca Tea multiple times a day throughout our stay.

Coca Tea also proved to be a good remedy to help settle that gastro bug that half our group picked up during the Lost City Trek. If only we could order coca leaves at home!

We would have loved to take some coca tea with us, but the strict regulations for bringing coca tea back to North America are still in place, so we’ll have to go back to South America to enjoy this local specialty. 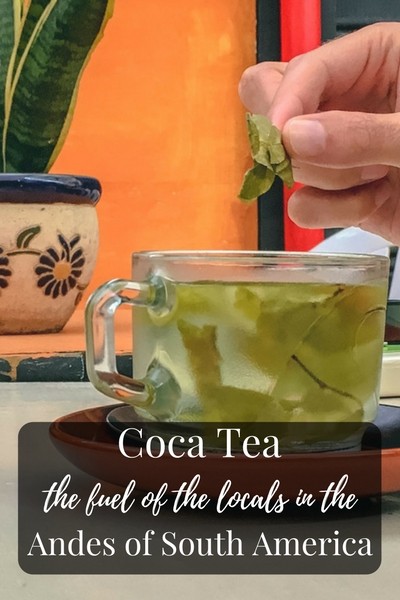