What to do in New York City in the Winter

Because each block of New York City bustles with character, the five boroughs of the Big Apple will leave you with no shortage of things to do. With more than 8.5 million residents and more than 56 million visitors each year, there’s no doubt that New York City is busy any time of year. Visit NYC in the winter for incredible experiences that this prime location makes even more magical.

Ice skating in New York City is as charming as it sounds. Couple a winter stroll through Central Park with a visit to either the Lasker Rink or the Wollman Rink. In the heart of Midtown you’ll find another popular skating spot, the Rink at Rockefeller Center. This picturesque landmark is only a stone’s throw away from Times Square and the Theater District. Be sure to check the public skating hours, as they vary from rink to rink.

New York is an international melting pot of high-class world cuisine. With more than 24,000 eating establishments in NYC, there’s a diner, restaurant, takeaway, deli, or café for every type of taste buds. From bagels to pretzels, croissants to pizza, and dumplings to pastrami, you can eat some of the most authentic meals from every corner of the globe. Don’t miss high-class dining at affordable prices during NYC Restaurant Week, which runs from January 23 to February 10, 2017.

Average temperatures in NYC range between 2 and 9 Celsius or 36 and 48 Fahrenheit in the winter, so spending a few hours indoors will feel great after you’ve explored the great outdoors of New York. Fondly known as the Met, the Metropolitan Museum of Art is the largest art museum in the United States and one of the most visited in the world. It boasts a permanent collection of more than 2 million works.

The Museum of Modern Art is much smaller, but it’s regarded as one of the most influential modern art museums around the world. It’s home to almost 200,000 works of modern and contemporary art.

New York boasts some of the world’s most famous attractions. Enjoy breathtaking views of New York City’s winter wonderland from some of the highest observation decks. The Empire State Building, the Top of the Rock, and One World Observatory offer exceptional viewpoints.

Sports fans can book tickets to New York Giants football games or New York Knicks basketball games. Animal lovers can visit one of the many New York zoos and aquariums maintained by the Wildlife Conservation Society.

You can’t leave New York without experiencing its heartbeat. The NYC Theater District is home to bold musicals, hilarious comedies, timeless classics, and heart-wrenching dramas. Visit between January 17 and February 5 to scoop up two-for-one tickets during NYC Broadway Week. Here, you’ll enjoy some of the best performances you’ll ever see.

Although accommodation prices tend to climb for Christmas and New Year’s Eve, many hotels in NYC offer plenty of great deals and rates throughout the winter season. Whatever the price, you can’t disagree that NYC in the winter is a magical wonderland. 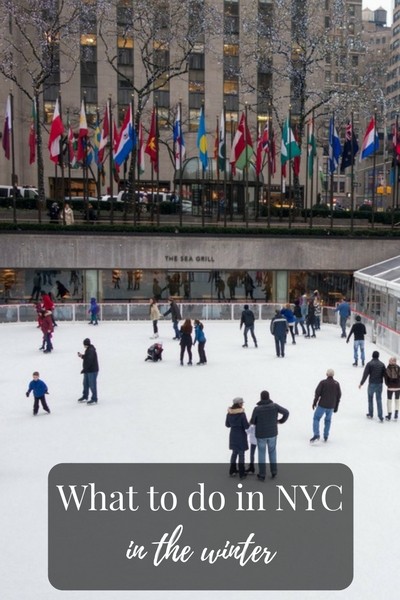