Most Exotic Animals in Costa Rica to Spot on Your Visit

This post was originally written in 2017 but has been updated in 2018 with more information about the unique animals in Costa Rica.

USA Today  has recently nominated Costa Rica as one of the 10 best places in the world to observe animals in their natural habitat. Between the misty mountains, the secluded beaches, the lush jungle of the rainforest, and everywhere in between, the animals in Costa Rica are still easy to come by (for now at least).

But don’t underestimate these smart little buggers! They have adapted to their environment and camouflaged themselves so well, that seeing them in the wild is not an easy task. Luckily, we spent quite a bit of our time in Costa Rica away from the tourist trails and close to the animals’ natural habitat, probably increasing our chances of spotting these awesome unique and exotic Costa Rica animals. So here are some of our favourites!

Howler Monkeys are native to the forests of Central and South America and are one of the easiest animals in Costa Rica to spot on your vacation. They are famous for their loud howl (hence the name howler) that can be heard for miles. They typically live in a group of 6-15, so if you spot one, it is very likely that there is more are around.

They spend the majority of their days resting and sleeping and seem to be most active in early evenings. Don’t worry about keeping an eye out for these guys, you’ll hear them before you see them. They are most prevalent in rural areas with lots of trees and vegetation.

He may look familiar, (umm hello it’s Marcel from Friends!), but you won’t find this white-headed monkey in its natural habitat anywhere but in Central America. This Costa Rican animal is highly intelligent and is rather versatile, living in different kinds of forests and eating all kinds of food. These monkeys often hang out in groups of 20-40 and tend to live a long life of over 54 years old.

These are rarer than the howler monkeys, but still easily spotted in areas like Manuel Antonio, Monteverde and other reserves and national parks.

These tree living mammals are native to South and Central America. The ones in Costa Rica come in 2 varieties: the two-toed sloths and three-toed sloths. They spend the majority of their days, hanging upside down, asleep for 16 to 18 hours each day. They can’t walk, so if you are hoping to spot one while in Costa Rica make sure to look up high in the jungle canopy.

The pizote is a member of the raccoon family and despite the fact that it doesn’t look like your typical North American raccoon, it certainly possesses a lot of the same behavioural qualities. Pizotes range between 30 and 70cm in length but weigh only about 2-8kgs. Despite their small frame, they have strong jaws and sharp teeth and, just like their North American cousin, can often be found digging for food in garbage bins.

While toucans inhabit the majority of the South and Central American continent, this specific type is particularly popular on the Caribbean side of Costa Rica. They are not easy to spot in the wild, but we loved that we got a chance to see one of these when we made a stop at the Las Pumas Rescue Center near Liberia.

This toucan was beautiful, proving that the animals in Costa Rica are just as bright and colourful in real life as they are in pictures!

The Ocelot of Costa Rica, also known as a dwarf leopard, is an incredibly adorable looking wild kitty that is prevalent in most areas of South and Central America. Despite being extremely common and not at all endangered, these wild cats don’t just roam the jungles of Costa Rica. Ocelots may spend their days resting in trees or other dense foliage, but seeing them in the wild, even in the animal sanctuaries of Costa Rica, is rare.

This little guy was once kept as a pet in a Costa Rican home. When he grew up and started showing his wild side his owners gave him up to the Las Pumas Rescue Center where he is based to this day.

Nothing beats seeing some of these awesome animals in the wild, but if luck isn’t on your side during your travels throughout Costa Rica, be sure to stop by the Las Pumas Rescue Center located on the Inter American Highways on the way to Liberia for a chance to see the Toucan, the Ocelot and a few other unique Costa Rican animals.

The Rescue Center has done a great job at replicating the natural habitat of these animals helping them live a better life no matter what their original life story was.

Can you believe that this little guy is one of the most dangerous animals in Costa Rica? They may be tiny and look pretty, but don’t be fooled. Their bright colours are a warning: Look, but don’t touch! The largest species of these little amphibians has enough toxin to kill up to 20 men. 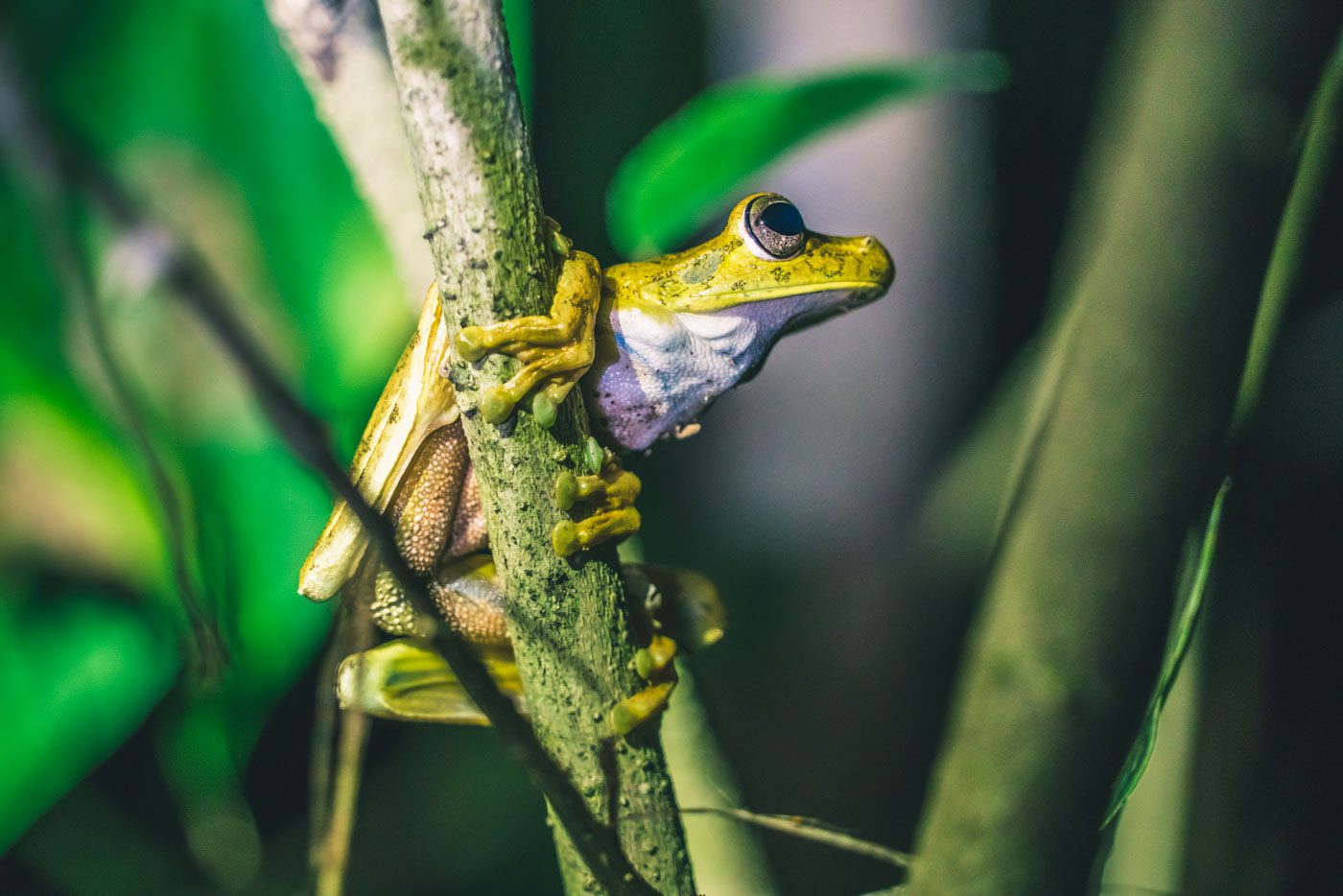 They are pretty tiny, so seeing them in their natural habitat in the wild can be mission impossible. But, if you’re keen there are many animal sanctuaries in Costa Rica where you can try get a glimpse. The Arenal Natura Ecological Park has a fantastic frog garden where you can catch a glimpse of the small but deadly poison dart frogs.

Perhaps not one of Costa Rica’s animals you want to come across on your travels! But if you are curious about this fascinating creature, then head to the Tarcoles Bridge, which is also known as Crocodile Bridge, and for good reason! There, you can see hundreds of these guys just hanging out.

The average crocodiles in Costa Rica can be 13 to 16 feet long and weigh up to 1200lbs, making them one of the Americas largest species of crocodile. In Costa Rica, they tend to prefer the lowlands along the coasts but they are mostly restricted to the national parks, but just keep your eyes open when you’re in the water!

The tapir is arguably one of the weirdest looking mammals we came across in Costa Rica. These herbivores feed off Costa Rica’s plant life, eating mostly fruit, grass, leaves and twigs. The gentle giants are usually around 6ft long and 800 lbs, making them the largest Costa Rican animal roaming the tropical forests.

However, tapirs are on the endangered species list so spotting one in the wild is unlikely, although not impossible. To be sure you catch a glimpse of these amazing weirdos, we recommend visiting one of Costa Rica’s animal sanctuaries. We were lucky on our visit to the Corcovado National Park to spot a tapir taking a stroll along the beach!

No matter what time of year you visit, you’re bound to spot some of these amazing creatures. But, check our month by month guide to the best time to visit Costa Rica for the most enjoyable nature and wildlife experience.

What are some of the cool animals you have come across in your travels?