As the weather gets warmer, the days get longer and the grass gets greener, many North Americans and Europeans start dreaming of summer vacations. Millions take advantage of summer school holidays and warm weather, and feed their travel addictions by embarking on a trip to Europe. For many, it’s an exciting whirlwind adventure to countries like the UK, Spain, France, Italy and Germany. And while a trip to Western Europe remains a more common choice, more and more travellers are now drifting East, to explore the lesser traveled and somewhat untouched countries in Eastern Europe and the Balkans.

Travel to Eastern Europe is on the rise, with backpackers and young seasoned travellers paving the way, although more and more families and senior travellers are now also choosing to explore this region. So what’s the draw of the Eastern Europe adventure?

When you think of Eastern Europe, great beaches isn’t something that comes to mind but countries along the Balkan Coast like Croatia, Albania and Montenegro have beaches that can easily rival those in Spain or France. With white sand, crystal clear warm waters and stunning views, they’ll be either less crowded or filled with good looking Eastern European girls. Heads up single male travelers!

Eastern European cuisine varies by country but many dishes have similar characteristics: hearty, rich, infused with herbs and paprika spices. From perogies, to goulash soup, to cabbage rolls, to borsch, to vareniky, the food options are like nothing you have tried before. Hard to resist, even harder to refuse, and if you are eating with a local, do not leave anything behind or you won’t hear the end of it!

If you are looking for the off the beaten path experience, this is it. While the capital cities in Eastern Europe have seen their fair share of tourists, majority of the other cities, have not. Life here still goes on as it did for decades. Grandmas are still sweeping the streets with their brooms, kids still running around outside, families eating foods from their backyard farms, there is a sense of community and respect for tradition. Unfortunately, you’ll now find less and less of this in large cities as Western influences have taken a toll on Eastern Europe over the last 5-10 years. And the more time passes the more Westernized and touristy these places will become.

You can easily travel in Eastern Europe on less than $50 a day. In fact, if you are happy staying in hostels, eating local and drinking in moderation you can get by on $30-40.

The locals are very curious about foreigners and will frequently surprise you with their generosity and willingness to help. It is a myth that no one in Eastern Europe speaks English, in fact most young people do and are more than willing to use it to help you. They’ll share their meal with you, they’ll give you a place to sleep, they’ll even give you gifts, often spending their savings to offer you the best of everything.

Eastern Europe Has It All!

6. METROPOLITAN CITIES, like Prague, Budapest and Krakow, that are booming with economic development and attracting tourism from all over the world.

9. BREATHTAKING LAKES, like Lake Bled in Slovenia, Lake Ohrid in Macedonia or Plitvice Lakes in Croatia

11. CAVES, ROCK FORMATIONS, AND VALLEYS, like the Belogradchik Rocks in Bulgaria, also the site of a fortress, Pravcice Gate Rock Formation in Czech Republic that sits on the German-Czech border, Vrelo Cave in Macedonia that contains a spring and natural rock formations, Tara River Canyon in Montenegro –  longest canyon in Europe, and Djavolja Varos Rock Formation in Serbia – a natural spring flows underneath these unusual rock “pyramids.”

12. AND OVER 75 UNESCO WORLD HERITAGE SITES  in nine countries of Eastern Europe, ranging from churches, to historical centres, to fortresses and rivers.

And last, but certainly not least, you should visit Eastern Europe to explore and learn about its RICH HERITAGE AND LOCAL CULTURE. Some rituals and traditions are ingrained deeply into the culture’s everyday life and can be easily encountered by travelers, other are seasonal and can only be experienced during a particular time of the year and some are really hard to come by, practiced only in particular regions throughout Eastern Europe. 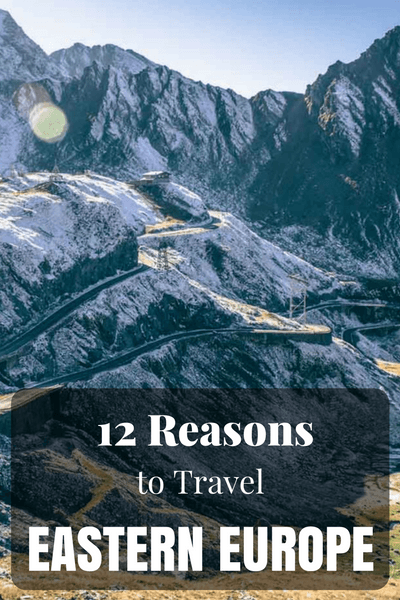 What reasons make you want to travel to Eastern Europe?