India Travel: the Good, the Bad, and the Bizarre – Part 3

In this 3rd and final instalment of this India Travel Series, the focus is on the bizarre! If you have ever been to India you probably know what’s coming. Remember all the times when you had to look twice and then thought to yourself “did that really just happen”?

Top 5 Most Bizarre Things in India

I have quite a few Indian friends, yet I have not come across this gesture before my trip to the South of India earlier this year. It turns out, the gesture, which is simply a side to side head wobble, is very common in the South. It is used as non-verbal communication to indicate “yes”, “no”, “maybe”, “I don’t know”, “ok”, “I understand”, depending on the context. AHA! Well that’s easy! Except, it really isn’t! Especially, when you are a foreigner and you don’t know the context and all you want to know is whether the answer is “Yes” or “No”.  Sigh… I guess we’ll never get it. At times it becomes so frustrating that it’s just funny!

For a more visual representation of the Indian head shake watch the video below.

2. The staring, pointing, and photo taking

At first it made me really self-conscious and uncomfortable.

“Am I wearing something inappropriate?
Is there toilet paper stuck to my shoe?
Why is everyone starring at me, pointing, and laughing?”

I really didn’t understand it at first. No matter where I went in India, I was stared and pointed at, by men, women, and, especially, teenage boys. Some would approach me and ask for a photo, others just wanted a hug, but there were many that just kept looking from the distance.

After a while I got used to it and learned to just ignore it. I realised they don’t mean any harm and are probably just curious. After all, I am a rather tall specimen…

3. Cows on the streets… and everywhere else

In Hinduism cows are considered sacred, and thus are worshipped and honoured by Hindus in India. About 80% of the Indian population identify themselves as Hindus, so it’s no surprise that the cow is worshipped across the country. It’s this sacred view of the cow in the Hindu religion that allows them to freely roam the streets in India. It was shocking at first, but was easy to get used to…until I saw this…

There is just something not right about a cow roaming the beach…it left me pondering for days. Until on another beach we came across this sight.

and then finally this…

It’s fair to say that ALL animals just roam around the streets in India. It’s just the way it is.

Honking is the only way on the roads in India. Regardless of whether there is ground for honking or not, you will notice your taxi drivers and your tuk-tuk drivers using their honk extensively. Sometimes, it’s to hurry up the driver in front of them, sometimes a honk is used instead of a blinker, to show that you are turning or passing, and sometimes its just a habit. And it doesn’t help when the trucks and other cars encourage it.

5. You can always fit more people into a moving vehicle

The concept of personal space goes out the window when there is only one van and 20 people wanting to get into it. There were a few too many times when we all had to cozy up and get friendly. Although, I guess it’s not just an Indian phenomena. It’s no more odd than trying to cram into the London tube car at Kings Cross on a Monday morning.

It’s a short list of bizarre experiences in India. Maybe having been to India and other parts of the developing world, things surprise me just a bit less than they used to? What is your take on this?

I’m sure there are dozens of other examples of bizarre experiences in India, so if you’ve got one to add, please leave a comment below. 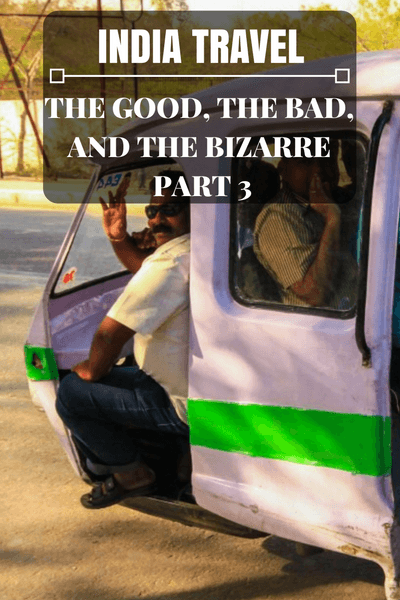