Is Jakarta Worth A Visit?

They say you either love Jakarta or hate it. But in our opinion, the only word that accurately describes the Indonesian capital is “disappointing”.

To be honest, if direct flights from Singapore to Yogyakarta were cheaper we probably would’ve bypassed Jakarta altogether, but since we are traveling on a budget, a stop in Jakarta was the most sensible option.

Jakarta didn’t welcome me with opened arms. I was still waiting for Max to catch up with me after his fiasco of a flight from the U.S., so I had to make my way to the hotel alone. I negotiated what I thought was a fair taxi rate (150,000 IRP) to get to the hotel only to be told that I owed double that amount upon arrival. I didn’t back down and after a 30 min argument with the driver paid what I agreed, but the experience didn’t leave a pleasant aftertaste in my mouth. From that moment onwards, I was constantly on edge, waiting for the next “friendly local” to try and scam me into some other tourist trap.

Just for the record, they didn’t.

Once Max arrived we put together a list of places to check out in Jakarta and took off on a day of exploring.

Located at Lapangan Merdeka (Freedom Square), the National Monument is Jakarta’s best known landmark. The 137 metre monument stands proud in the centre of Merdeka Square and offers great views of the entire city. Or so they say…

See, what everyone failed to mention was that the National Monument was only opened until 3pm. So disappointing it was when we showed up at the gates at 14:50 just to find out that we weren’t going to make it up.

Without getting up to the top, the monument was just average.

Istiqlal Mosque, located near the Monas Square is meant to be the biggest mosque in Southeast Asia. And while its  sheer size was impressive, it didn’t quite live up to our expectations. Maybe we were hoping to see a bigger version of the Istanbul’s Hagya Sofia or maybe we simply arrived at the wrong time or on the wrong day, but we left almost as quickly as we arrived.

Across the street from the Istiqlal Mosque sat the Jakarta Cathedral, a neo-gothic-style Roman Catholic place of worship, founded in 1901. It’s close proximity to the Istiqlal Mosque symbolises a close relationship and peace between the two religions in Jakarta. It’s old colonial gothic architecture was reminiscent of La Sagrada Familia in Barcelona, although as with the other attractions it left a lot more to be desired.

Underwhelmed by the main sights we headed for what we thought would be a more cultural experience in Old Jakarta.

“The area collides modern Jakarta with its old Dutch colonial charm” the travel guides promised. If there was one word we would use to describe Jakarta’s Old Town, it is bizarre.

The road leading up to the main square was lined with street food vendors and crowded with heavy traffic on this busy Wednesday evening. What was meant to be a charming part of the town seemed no different than any other area in Jakarta. Maybe it was our lack of understanding of the nuances of colonial architecture or our genuine disinterest  in museums in the area, but it seemed like Jakarta was once again delivering far below our expectations.

Taman Fatahilah, in the heart of old Jakarta, is known as a popular gathering place for local families and out of town visitors. And while we simply couldn’t understand its appeal, we found it fascinatingly strange!

Here, fluorescent bikes with teenagers wearing matching fluoreascent hats dotted the square, buskers were showing off their levitation skills, a group of Rastafarians were smoking pot and making bracelets, and a dozen of teenage boys were dressed in old cartoon costumes posing for photos with children. The square was littered with make shift stalls selling trinkets and trash, budding musicians, and stray cats.

There was so much going in Taman Fatahilah, there was nothing going on at all. Was this a taste of local culture or yet another tourist trap?

We couldn’t quite figure it out.

An hour later, we were back on the train towards our hostel, feeling like we tried so hard to give Jakarta a chance, yet despite our efforts it never quite delivered.

That night we visited the local street food night market on Jalan Mangga Besar (St. Mangga Besar) in the south of Old Jakarta. After roaming the stalls with cobra, lizard, and eel on the menu, we settled for a much less exotic meal of chicken satay with rice a delightful peanut sauce, followed by some overly sweet bubble tea shake for dessert.

That night we were the only bule (foreigners) at the night market. Had we finally done it right?

Was this the gem of Jakarta we were searching for this whole time?

Perhaps. But it wasn’t enough for us to fall in love with Jakarta. To be honest, I’m not sure anything could’ve been.

There are a ton of places in Jakarta we never got to see, but considering that museums, shopping malls and theme parks don’t really strike us fancy, we never really felt like we missed out on experiencing Indonesian capital.

Would we ever come back? No, probably not.

Is it worth your visit? Well, it depends.

If you are on a tight schedule then Jakarta is a city you can probably skip. But if you have the luxury to linger and explore, we are confident that Jakarta, just like any large metropolis, will eventually invite you into its pockets of culture and vibrant life that many expats and locals have grown found of in the city. 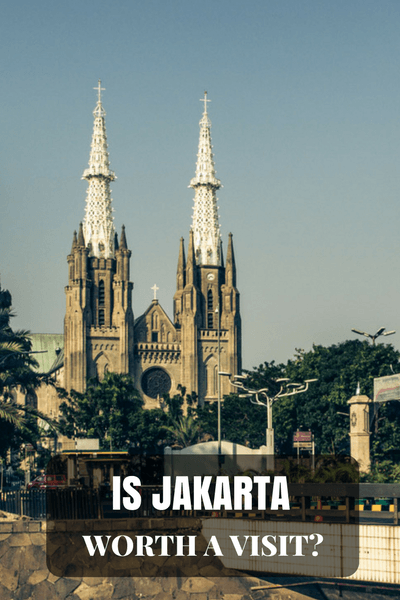 Do you think Jakarta is worth a visit? What are some of your recommendations for things to do in the city?

16 thoughts on “Is Jakarta Worth A Visit?”