There’s no shortage of historic and religious monuments to visit in Greece, but one of the most astounding is the Meteora Monasteries. Perched on top of massive rock columns, the monasteries are truly a sight to behold. In fact, Meteora translates to “suspended in the air.”

Not only a spot of great historical significance, Meteora, Greece is also a famous pilgrimage site. The devout have been coming here for many years to pay their respects and see the incredible engineering feat that is the monastery complex.

If you’re visiting the Meteora Monasteries, you’re sure to have an interesting and educational visit. You’ll also love exploring the rugged grounds surrounding the monasteries of Meteora, which offer incredible views. We highly recommend you don’t skip this amazing sight on your next trip to Greece.

How to Visit Meteora Monasteries

Meteora makes an excellent day trip from Athens, but it can also be visited on a multi-day excursion. Either way, you’ll likely be arriving from Athens or another major city.

Meteoro can be reached by train, bus, or car. The train is quicker and less complicated than taking the bus, although slightly more expensive, and you’ll have to make sure to take one headed for Kalabaka, the closest city to Meteora. You can catch one from Athens’ main train station. Kalabaka should be the last stop on the route. 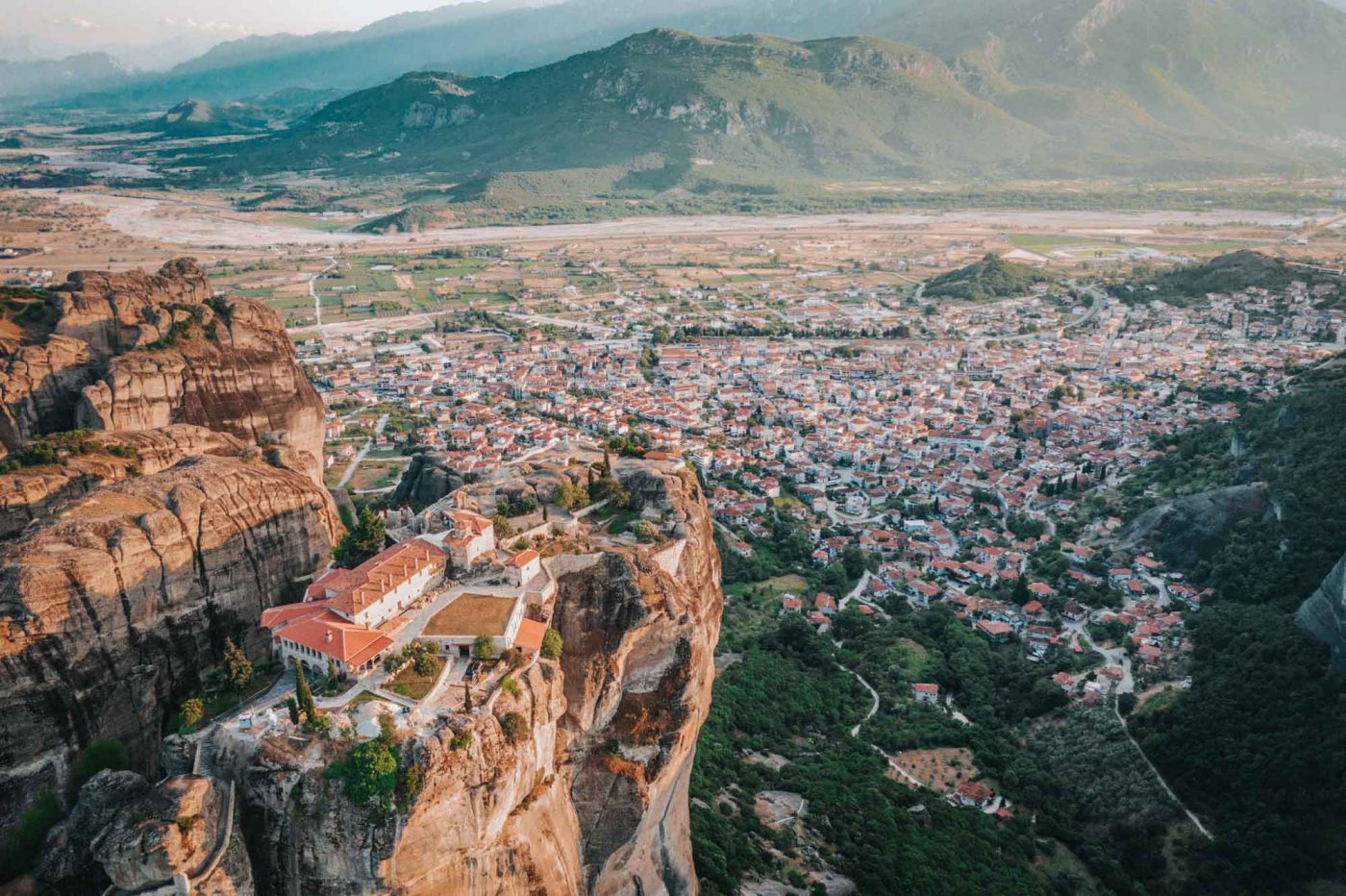 If you’re taking the bus, head to the main bus station near the Kato Patissia metro station in Athens. Buy a ticket headed for Trikala. Once you arrive in this city, you’ll need to switch buses to make it to Kalabaka. For further information about public transportation to the Meteora Monasteries, check the tourism board’s website.

If you’re driving, you’ll want to rent a car in Athens or whichever city you are coming from. Definitely take it for at least two days so you can enjoy the road trip along the way.

The Meteora Monasteries can also be reached on an organized Meteora tour from Athens if you’re interested in going with a guide and group.

There were originally 24 monasteries built on top of Meteora but today, only six remains. These six are all actively running, with a small number of monks and nuns in charge.

Although one day at the Meteora Monasteries might suffice, it is possible to visit all six of the complexes if you spend at least two days in the area.

This is the largest and most impressive of the monasteries at Meteora. It’s one that you absolutely can’t miss while you’re there. It has undergone many restorations over the years, but still maintains its unique old charm.

The main museum at Meteora, Greece is located inside this complex. Since it’s the most popular among tourists, you’ll want to visit this one either first thing in the morning or at the end of the day.

Varlaam is the second largest of the monasteries of Meteora and is host to the largest number of monks of all the monasteries. If you’re lucky, you’ll even get to see some of them as they go about their daily tasks.

There is a beautiful church here dedicated to all saints that has a large dome and altar, and it is very much worth a visit. Another church dedicated to three bishops is also right nearby. There’s also a museum that is located in what used to be the monastery’s dining room.

Monastery of the Holy Trinity

This is perhaps the most precariously perched monastery, located smack on top of a gravity-defying tower of rock. For this reason, it is also one of the most picturesque.

Inside, you’ll find stunning frescos and religious relics. It’s also one of the best places to get a great view of the entirety of Meteora.

The Monastery of Rousanou is one of the main monasteries that houses nuns. (The men and women are separated at Meteora.) It is supposedly named after the first hermit whoever settled on Meteora.

This monastery’s claim to fame is the paintings of the Catholicon, stunning works of art on the walls of the churches here.

St. Stephen is another one of the Meteora Monasteries run by nuns, and it currently plays host to the largest number of workers of any of the monasteries. This one is the easiest to get to and is the best one to visit if you have any kind of mobility issues.

This monastery contains the Church of St. Anthony, including a mysterious crypt where the monastery’s precious heirlooms are kept safe. The monastery was artistically painted by the Cretan artist Theophanis Strelitzas, making it the best monastery to visit for art lovers.

Hiking is, in our opinion, the best way to get around at Meteora, as there are some incredible hikes over these bizarre and wonderful rock formations. After taking some gondola rides up to the top where the Meteora monasteries are perched, you can hike on trails that connect one building to the next. The hikes are generally steep and rugged, so make sure you’re prepared with sturdy shoes and some water.

There are a number of truly phenomenal sunset spots near the monasteries. We watched the sunset at Psaroperta and really loved it; it was not crowded and the views were simply perfect. 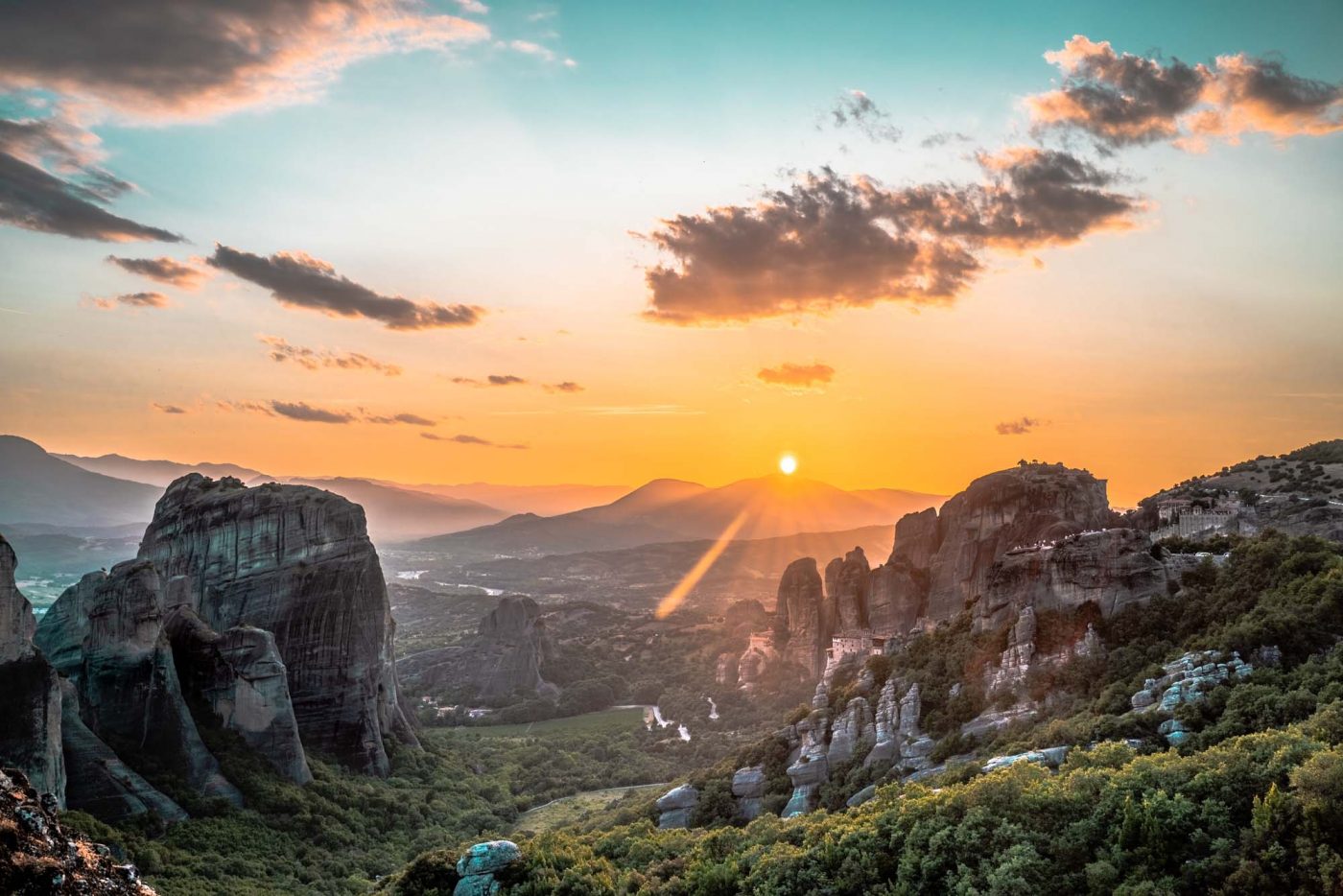 If you have time to spend the late evening, we highly recommended catching the sunset here. This isn’t the only place where you can catch views at the end of the day, so hike around a little bit until you find a great spot facing west.

With very little shade and a closer location to the sun, the Meteora Monasteries can be a seriously hot place to visit. It is best to explore in the morning and then go back to your accommodations when the heat of the day becomes too much, and then come back in the evenings.

Some of the monasteries are only open until 3 PM or on certain days of the week. They also may be closed due to holiday schedules or religious events, so make sure to check the schedules before visiting.

Where to Stay Near Meteora

The town of Kalabaka is the closest major town to Meteora, Greece. It’s a lovely place with nice views, good restaurants, and lots of accommodation options.

Alternatively, you could stay in Trikala, a smaller town slightly closer to monasteries. It’s less touristy and has fewer options, but it’s a bit quieter.

Some good options are the Tsikeli Hotel, a lovely eco-hotel right with lovely views of Meteora in Trikala or the Monastiri Guesthouse, a beautiful option in Kalabaka.

We hope this guide will help you plan your visit to this amazing historic and religious site. If you’re pressed on time, you can visit Meteora in one day, but we definitely recommend spending at least two so you can visit most of the monasteries and also hike in the area.

Have you visited Meteora before? What was a highlight of your visit?