Sunday City Guide: What to do in Bucharest

You may have heard mixed opinions about Bucharest. Thanks to its early architectural influences, some still refer to it as “Little Paris”, but others often question its appeal. It’s a grey, unattractive ex-communist city with little to see and even less to write home about, they say.

Perhaps, we were lucky to get a chance to experience Bucharest through the eyes of locals or maybe, we simply arrived in Bucharest with absolutely zero preconceptions, but we loved the city!

We spent 4 days in Bucharest and would definitely recommend it as a stop to anyone planning a visit to Romania. From leisurely strolls in beautiful parks and charming tree-lined boulevards to delicious meals in the Old Town, and the magnificent views of Palace of the Parliament, there was lots to enjoy in Romania’s capital.

USA News suggests that the best time to see Bucharest is in the summer (June – August) when the weather is warm, the skies are blue, the parks are in bloom, and the city comes alive with outdoor events and activities. But we have always been advocates for shoulder season! After visiting Bucharest in October, we couldn’t imagine a more beautiful time to explore Romania’s capital.

Yes, visiting Bucharest in the Spring (March – May) or Fall (September – November) may mean colder temperatures (expect highs of 10-20°C and lows ranging from 0-10°C), but in our opinion, having to bundle up for a walk around town makes this European capital feel just a bit more homey and warm.

If beautiful surroundings are what you are after, plan your visit for late September – early October when the leaves on the trees all around the city start changing their hues, turning Bucharest into a charming mosaic of colour.

Top Things to Do in Bucharest

First-time visitors to Bucharest will want to start off their sightseeing with a tour of the Palace of the Parliament (opening hours are 10am-4pm), one of the most iconic and most impressive buildings not just in Bucharest, but in the world. Built by Communist Party leader, Nicolae Ceausescu, the building has 12 stories, 1,100 rooms, a 328-ft-long lobby and four underground levels, including a huge nuclear bunker. Bring your ID and expect to pay a small admission fee.

From there, follow Uncover Romania’s “Best Things to do in Bucharest” list suggests that first-time visitors take a walk along Victoriei Avenue (Calea Victoriei) towards the Revolution Square and the National Museum of the Art. It’s not only a great way to see some of Bucharest’s cultural and historical attractions, but also a great opportunity to get off the beaten path on the nearby smaller streets.

From there, it’s an easy walk to Bucharest’s Old Town, where you can enjoy a variety of restaurants, bars, shops, and other entertainment.

History lovers won’t want to miss an opportunity to visit the National Museum of History, The National Museum “George Enescu“, and the Village Museum, which exhibits folk architecture and life, and transports you to the Romanian countryside. National Geographic also recommends a visit to the quirky Museum of the Romanian Peasant which offers exhibits off the elaborate woodworking, pottery-making, egg-painting, and weaving skills of the peasantry in a way that’s both educational and amusing.

When you’ve had enough sightseeing, spend a day soaking in the city’s natural setting by spending some time in one of Bucharest’s parks or taking a stroll along its many tree-lined boulevards. Visit one of Bucharest’s many parks and gardens as suggested by Bucharest’s In Your Pocket Parks & Gardens Guide, or opt to follow our footsteps and visit our favourite – Park Herăstrău (Parcul Herăstrău), located around Lake Herăstrău in the Northern part of Bucharest. Especially lively on sunny weekend days, Park Herăstrău, is a great place to blend in with the locals, get a bit of exercise, or enjoy some snacks/drinks at one of the many restaurants overlooking the lake.

Those traveling on a budget will be pleased to know that most attractions in Bucharest are free, including the famous Bucharest’s Walkabout Free Tour whose volunteer guides will help you discover the true face of this amazingly wild and captivating city.

Where to Stay in Bucharest

When we visited Bucharest, we stayed with friends in Dorobanti, one of the oldest areas of the capital that boasts beautiful architecture and a great hip vibe with lots of cafes and restaurants. While the area was lovely, it was a bit far away from the city centre, requiring a 10-15 min taxi ride to get to the Old Town.

If you are planning to spend only a few days in Bucharest, we suggest finding a place closer to the city centre or right in the heart of the Old Town. Go Mio Blog agrees with us and shares their views on staying in Bucharest’s Old Town, sighting great nightlife and amazing views as just some of the reasons to choose accommodation in this part of the city. Budget travelers will be happy to hear that rooms in the Old Town can be as cheap as $25-30/night.

CN Traveller suggests a couple of great hotels and inns to stay in Bucharest outside of the Old Town and Fleeting Life Blog gives an overview of the best three hostels in Bucharest, giving some good options for any type of budget.

Airbnb has over 300 accommodation options in Bucharest, ranging from shared, hostel style rooms starting at just $11 to luxury 6-8 bedroom villas for $550. Bucharest Tips suggests that if you opt for apartment rentals instead of a hotel, choose to stay close to big squares and boulevards and avoid Ferentari and Rahova districts as they do include some “ghettos” zones with gangs that could turn dangerous especially at night.

Don’t have an Airbnb account yet? Sign up now and receive USD $20 to put towards your first Airbnb stay!

Where to Eat & Drink in Bucharest

Romanian cuisine is hearty and incredibly diverse, influenced by many of Romania’s neighbouring countries. According to the Culture Trip, Bucharest’s restaurants and bars have multiplied in the last two decades, but if there is one thing we noticed when eating out in Bucharest is that it’s easy to eat at fantastic spots without breaking the bank.

For the best taste of Old Romania, head straight to Caru’ Cu Bere, one of Bucharest’s best restaurants set in a historic monument building dating back to 1898. It’s a popular restaurant with locals and visitors alike thanks to its beautiful interior and a great selection of dishes and dinner entertainment. This was our favourite restaurant in Bucharest! (Try their ciorba in bread).

Casa Vernescu and Casa Doina are two other restaurants that come recommended by the Conde Nast Traveller alongside Caru’ Cu Bere,  with the latter one being particularly great to visit in the summer.

If you are particularly keen to eat (or drink) in the Old Town, Romania’s Insider suggests their Top 10 places in Bucharest’s Old Town, including hot spots like the Grand Cafe Van Gogh and the smaller, more hidden spots like the Interbelic Cocktail Bar.

Those that want to know more about partying in Bucharest, will appreciate these Bucharest nightlife tips. Based on our experience, a fun thing to do in Bucharest on the weekend is to spend an evening bar hopping in the Old Town.

How Much Time Do You Need in Bucharest

The more time you spend in Bucharest, the more you are bound to discover. With its perfect balance of historic sights, unique attractions, outdoor activities, and cultural experiences, Bucharest is a great destination for a weekend escape. Rough Guides have put together a great “Coffee, Cocktails and Communism” itinerary perfect for those looking to spend 2-3 days in the city.

While 2-3 days will probably be enough to see the main sights and attractions, if you want to immerse yourself in the city’s day to day life, we do recommend adding a few more days to your stay. 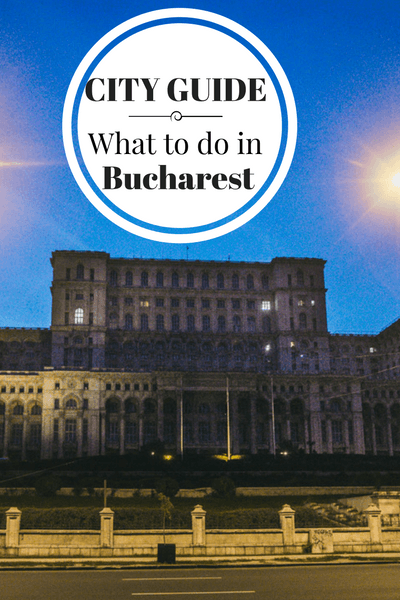 Have you ever been to Bucharest? What other must-do’s would you recommend to first-time visitors?

2 thoughts on “Sunday City Guide: What to do in Bucharest”