Where to See Sloths in Costa Rica in the Wild

Costa Rica is an incredible destination for wildlife lovers. This tiny country that occupies just .03% of the world’s landmass, is home to 5% of the world’s biodiversity.

Costa Rica supports a great variety of wildlife, including 1,251 species of butterflies, around 175 amphibians, 225 reptiles and nearly 250 species of mammals. Many of the animals and other species can be easily spotted on a nature walk in one of the National Parks throughout the country. Monkeys, birds, and reptiles are particularly easy to spot, but it’s the elusive sloths of Costa Rica that seem to excite travelers the most.

Before you go searching for the best place to see sloths in Costa Rica, there are a few things you should know.

There are two types of sloth species in Costa Rica. There is the brown-throated three-toed sloth (Costa Rica is more well known for this type of sloth), and Hoffman’s two-toed sloth species. Also known by their scientific names, Bradypus Variegatus and the Choleopus Hoffamani, respectively.

As you might already know, the sloths of Costa Rica are ridiculously cute and very slow. They are fascinating creatures. They spend about half of their lives in trees, hanging upside down as they eat, sleep and even mate.

What Do Sloths Eat?

Two-toed sloths eat many things like leaves, small insects, fruits, and even small lizards. However the three-toed sloth has a diet that includes several types of leaves, and that’s pretty much it.

Sloths have natural algae that grow on their coats. It helps them blend into the trees. However, because of the algae, a particular kind of moth has evolved to eat it. They live in the sloth’s coat creating something of an entire ecosystem in their coats.

The three-toed sloth goes to the ground to urinate and defecate about once a week. It buries its excrement where the moths lay their eggs. The larvae then eat the dung and fly back up to the coat of the sloth. It’s an entire circle of life.

How to Tell Apart Three-toed Sloth and Two-toed Sloth?

Looks distinguish the two main species of sloths in Costa Rica. So if you’re trying to spot them and want to know which kind you just saw, here’s a hint. The Costa Rica three-toed sloth has black eye patches and wide smiles on their faces. While, the two-toed sloth has a brown snout, a whiter face and a shaggier coat.

What is the Natural Habitat of a sloth in Costa Rica?

The natural habitat of a sloth in Costa Rica is within the rainforest but they also enjoy hanging from the trees of the cloud forests. So, if you’re wondering where to find sloths in Costa Rica, visit the Caribbean side of the country or the Central and South Pacific regions of Costa Rica.

Where to See Sloths in Costa Rica in the Wild

Manuel Antonio National Park is the most popular place to see a sloth in Costa Rica. You can hire a tour guide or hike in the park on your own.

If you have a sharp eye, chances are you’ll spot a sloth in the trees. Remember to look up. Having a good pair of binoculars can also help.

We’ll be honest, spotting a sloth in the wild is tough. So we recommend hiring a naturalist guide that knows sloths’ favourite hang out spots and can help you spot one during your visit. 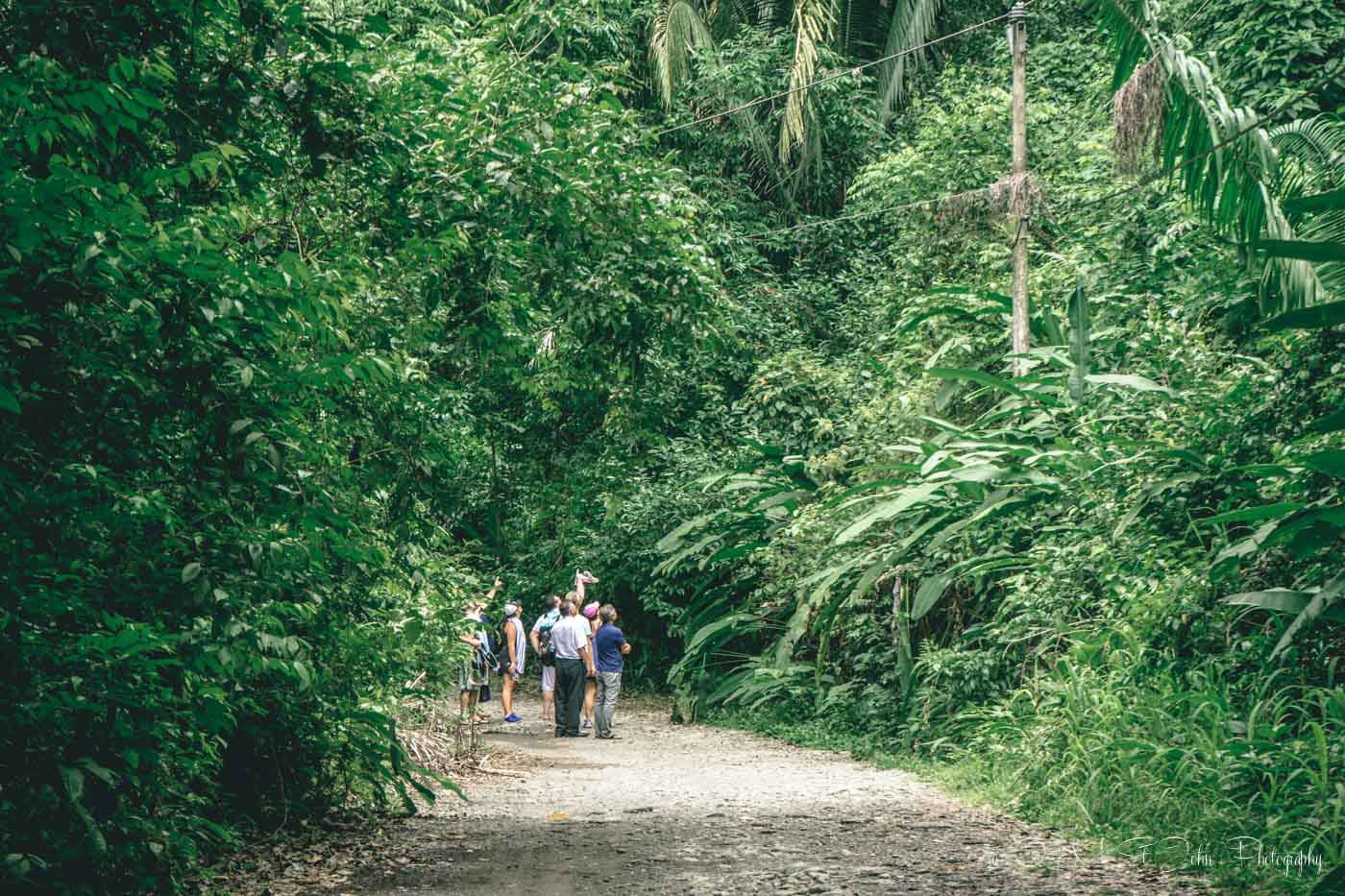 Corcovado National Park in the Osa Peninsula is another area you can see sloths in Costa Rica in the wild. This region is home to almost half of all creatures living within Costa Rica and is known as the most biodiverse area in the country.

Your best chances of seeing a sloth in the wild is during a trip to Corcovado National Park. Since it is not allowed to visit the park without a guide, you’ll be accompanied by one on your trip. The guides certainly make it easier to see sloths in Costa Rica in the wild.

Sloths love a wet environment. Therefore a cloud forest, where it’s always slightly misty is the perfect habitat for sloths and other wildlife.

Here, you have the option to take a nocturnal tour. These nighttime tours are designed for you to see nocturnal animals in action and since the two-toed sloth is most active at night you’ll have a much better chance of spotting one than in the day time.

Arenal National Park is home to Arenal Volcano, a popular tourist destination in Costa Rica. The park is home to a number of wildlife species including the three-toed sloth, that can be spotted in the thick of the forest.

You can join either of these great Sloth Watching Tours, which journey 2km on an outdoor hiking tour through the rain forest. This is a guided tour with a local naturalist, who will help you look for sloths in the wild.

Tortuguero is a remote section of Costa Rica that consists mainly of rainforest. This area is hard to get to without a boat tour or even a small jumper plane from San Jose Costa Rica.

Considering its remote location and the fact that it rains a lot, it’s a thriving ecosystem. A trip to Tortuguero can offer a good guarantee of seeing sloths in the wild. 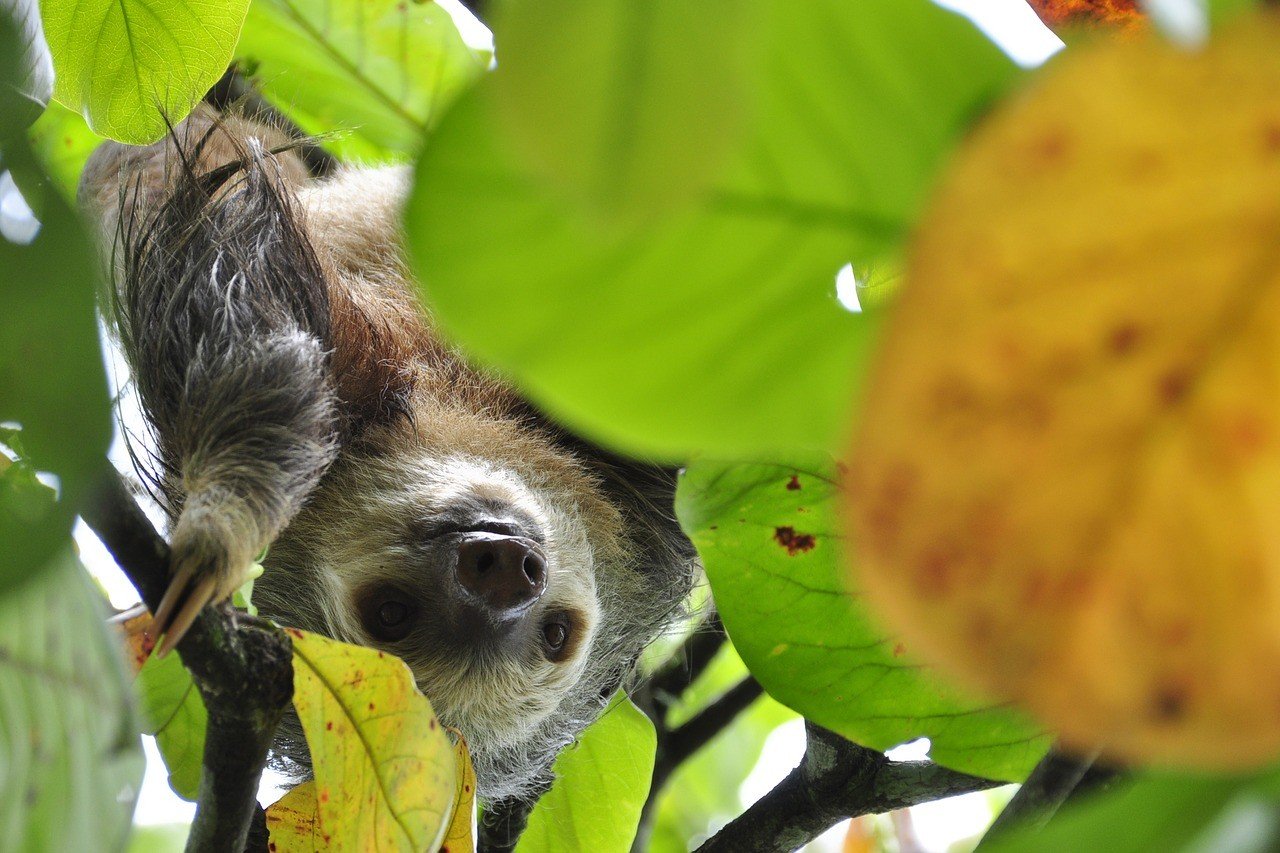 Finding sloths in the wild in Guanacaste is not an easy feat. The climate of this region is much hotter and drier than that of the Central Valley or Puntarenas, so sloths have a harder time thriving in this region.

Another popular way to see sloths in Costa Rica is by visiting an animal sanctuary. Costa Rica has quite a few and the intent of these rescue centres is to rehabilitate injured Costa Rica wildlife and sloths so they can be released back to the wild.

Unfortunately, many of these sanctuaries act like mere zoos and do not uphold any ethical standards. Here is a striking example to consider.

The most famous sloth sanctuary in Costa Rica is located in Limon, on the Caribbean Coast. The Costa Rica Sloth Sanctuary promotes itself as the original rescue center for injured, orphaned and abandoned sloths. They claim that their mission is the rescue, rehabilitation, research and, when possible, release of sloths into their natural habitat.

But a couple of years ago, a number of allegations came to light about the Costa Rica Sloth Sanctuary, when two veterinarian volunteers reported this sanctuary as inhumane.

They stated that animals in this “sanctuary” are mistreated, neglected and kept in cages and none have ever been released into the wild. Read the article above to learn the truth about what’s going on inside this particular sanctuary. It certainly sounds like the Sloth Sanctuary of Costa Rica is not making any real conservation efforts.

Are any of them? Without reliable insider information, it’s hard to tell.

Where Can I Hold a Sloth in Costa Rica?

Holding a sloth seems to be a bucket list activity for many visitors. However, in 2019, Costa Rica has passed a law prohibiting human to wildlife contact in the country.

That means that touching wildlife is now ILLEGAL in Costa Rica.

You should no longer be able to hold, pet, or touch a sloth anywhere in the country.

If you are truly passionate about wildlife and about sloths, in particular, you may want to consider becoming a Costa Rica sloth volunteer. A number of organizations throughout the country offer long term volunteer opportunities that allow you to assist them in their mission of rehabilitating sloths and other wildlife.

These opportunities require hard work and are not merely chances to feed a sloth for a cute Instagram photo, so we do not recommend these lightly.

The Sloth Institute, located in Manuel Antonio is a non-profit organization specializing in research and education with a particular focus on the behaviour, health and welfare of recently released, wild and captive sloths.

The Sloth Institute is NOT a sloth sanctuary and is not opened to the public. They do not offer sloth tours as it is in the best interest of the sloths to have as little human contact as possible.

However, the institute does offer an opportunity to volunteer with sloths in Costa Rica.

Read Next: The Complete Guide to Costa Rica National Parks

It is possible to see a sloth in Costa Rica in the wild as these cute creatures can be found in many National Parks across the country. For the best chance of spotting sloths, take a guided tour and bring a pair of binoculars so you can admire these creatures from afar.

Have you seen sloths in Costa Rica yet? Are you ready to experience the sloths of Costa Rica in the wild?

We are Oksana & Max, a Canadian couple with a passion for sustainable travel. In 2015, we left  behind our ordinary 9-5 lives to pursue our dream of full-time travel.