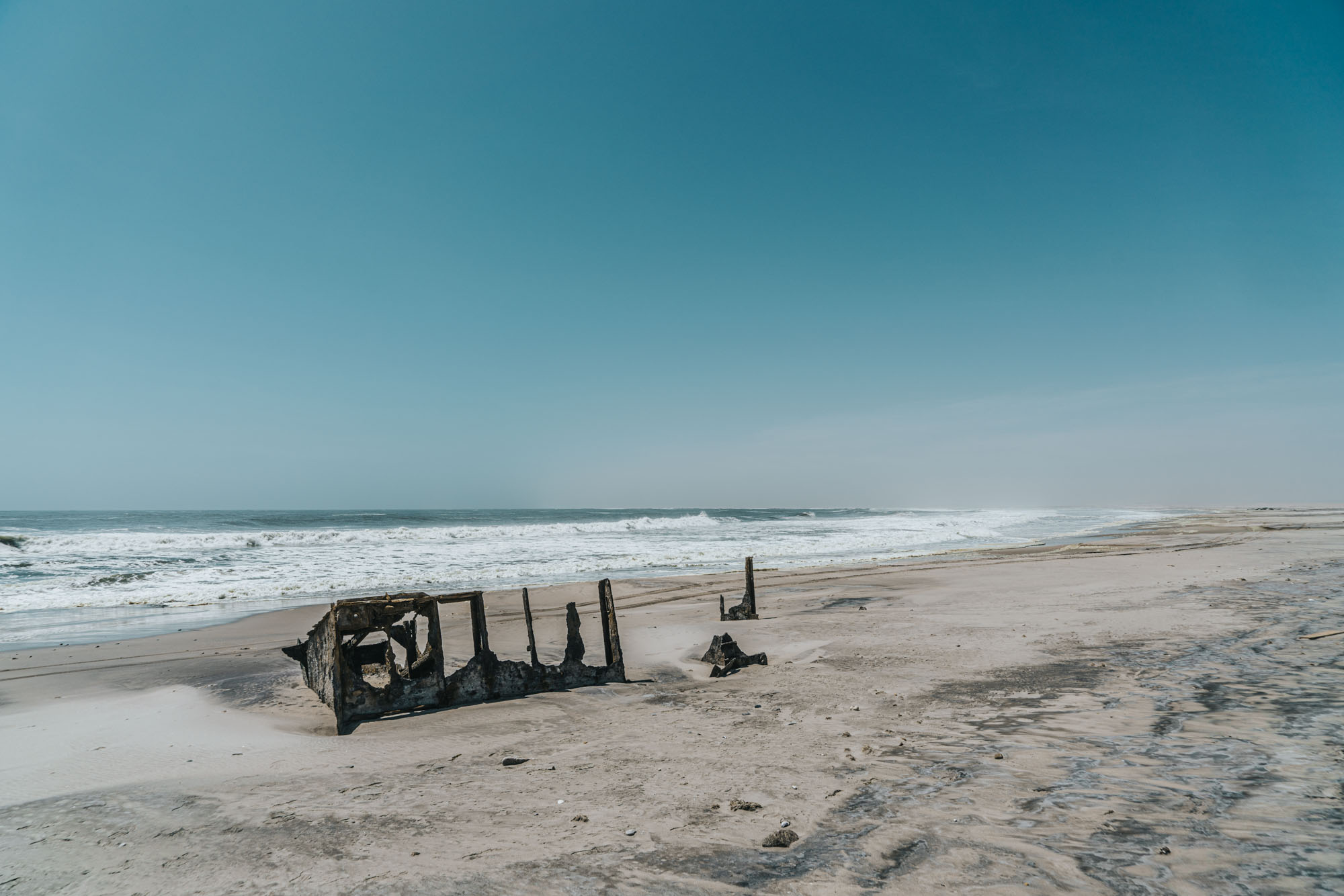 *This post may contain affiliate links, as a result, we may receive a small commission (at no extra cost to you) on any bookings/purchases you make through the links in this post. As an Amazon Associate I earn from qualifying purchases. Read our full disclosure HERE

Skeleton Coast National Park is one of the most inhospitable places within the oldest desert on earth in Namibia. The eerie coastline has long been considered a dangerous area for naval vessels due to the persistent foggy weather and unpredictable Benguela current.

Today, it’s known as the largest ship cemetery in the world, home to hundreds of shipwrecks along its coast.

The name “Skeleton Coast”, likely stems not just as patronage to the ships and crew who lost their lives on these beaches, but also to a high number of whale carcasses scattered all over the shores.

The Skeleton Coast is not a destination for every visitor in Namibia. It’s a rough part of the country that attracts only adventurous visitors, coming to the area in search of shipwrecks or to experience world-renowned Skeleton Coast surfing. 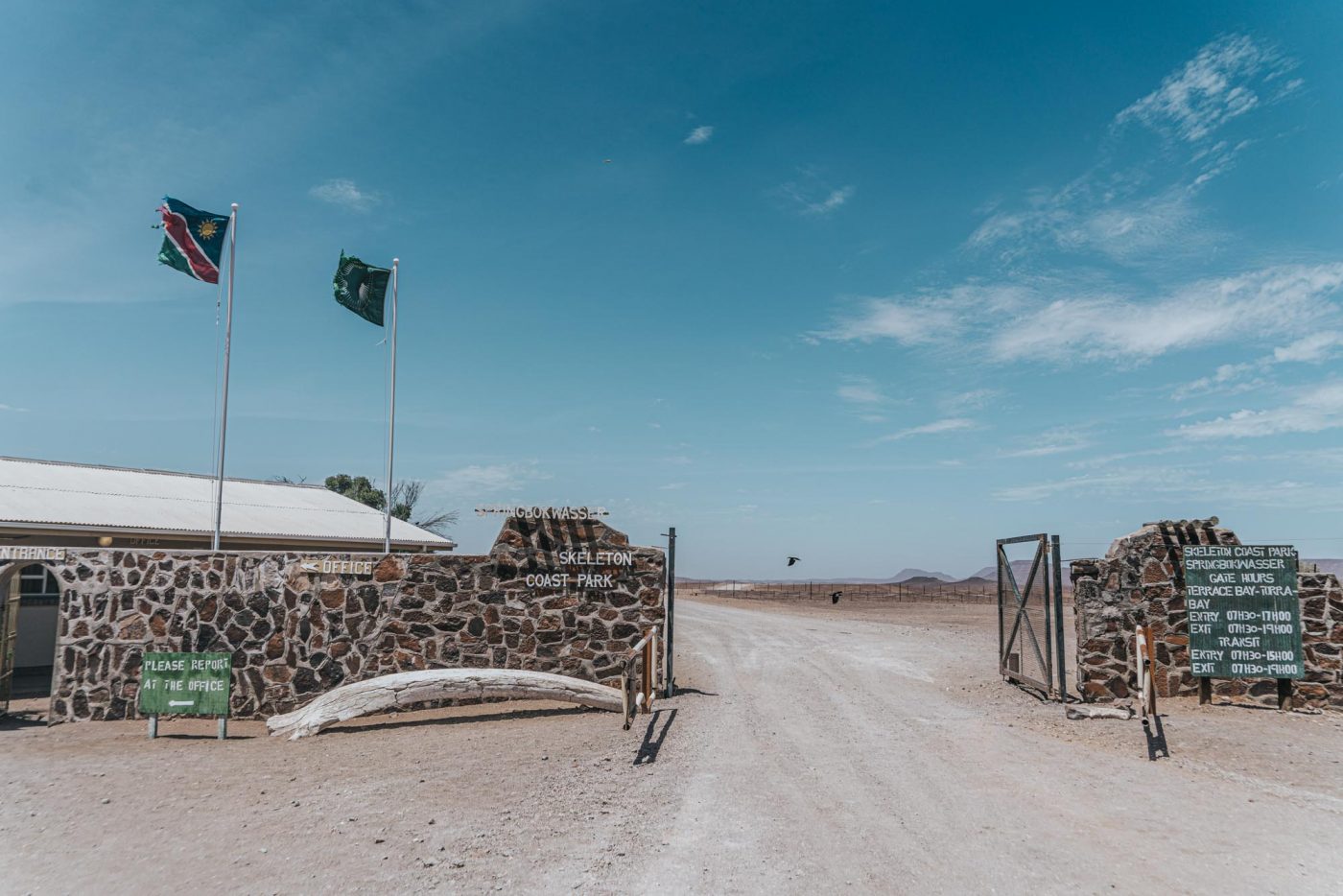 We chose to drive along Skeleton Coast en route from Palmwag to Swakopmund during our 2-week Namibian trip. It was a fun adventure that we would definitely recommend to adventurous travelers visiting Namibia.

Where is the Skeleton Coast?

Despite being one of Namibia’s biggest national parks at nearly 20, 000 sq km, the Skeleton Coast only sees a small number of visitors because of its remote location and wild, barren landscape. The area spans from Swakopmund in the South to the Angolan border in the North and into the sand dunes of the Namib desert to its East. 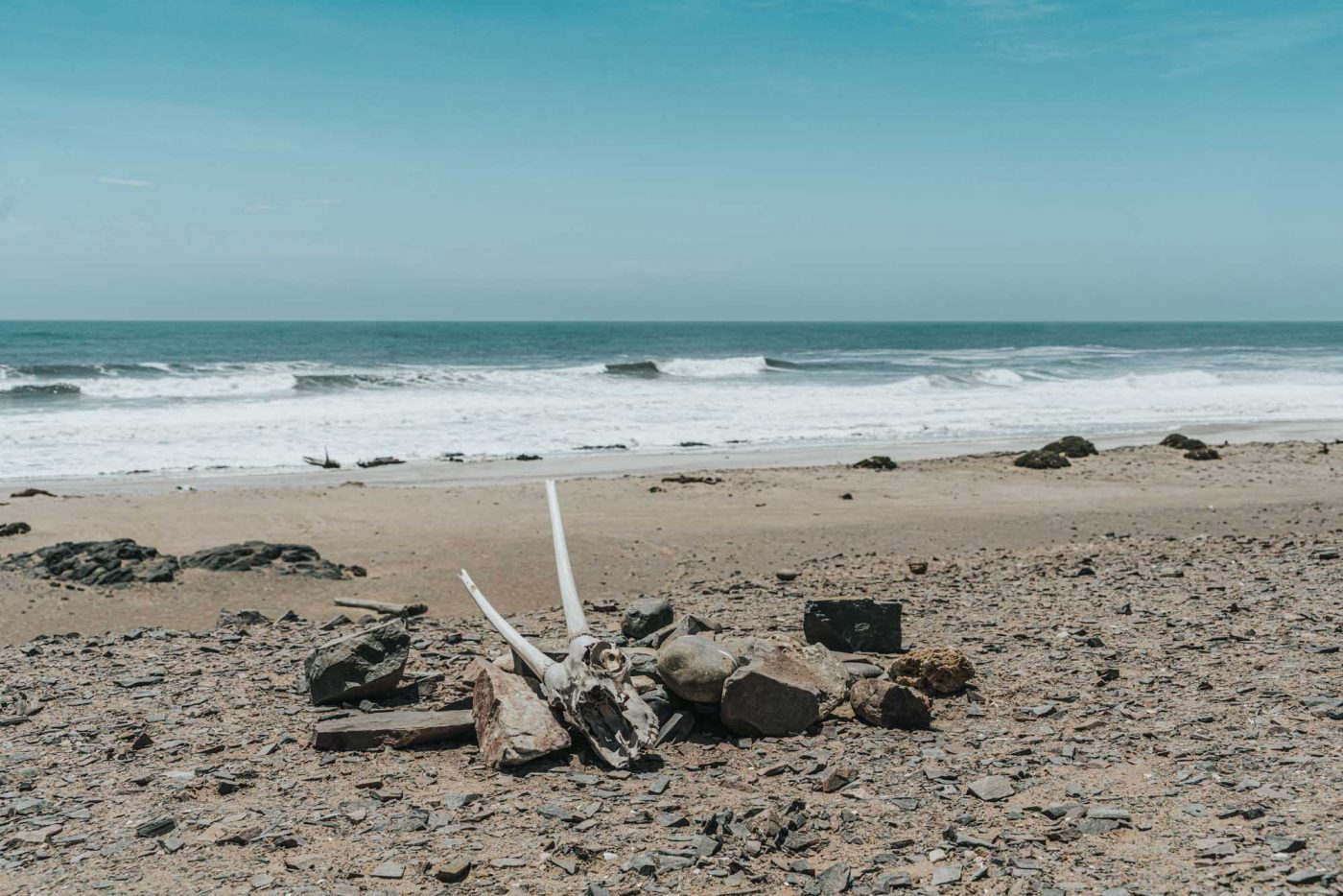 Despite being a dramatically desolate place, the Skeleton Coast, offers a few attractions including wildlife encounters, shipwrecks and remnants of the area’s past.

Things to Do in the Skeleton Coast, Namibia

The best way to experience the Skeleton Coast Park and to fully appreciate its desolate landscape is by taking a road trip through the area. You are not allowed to venture off-road so it’s not necessary to have a 4WD, as the gravel roads here are in relatively good condition. 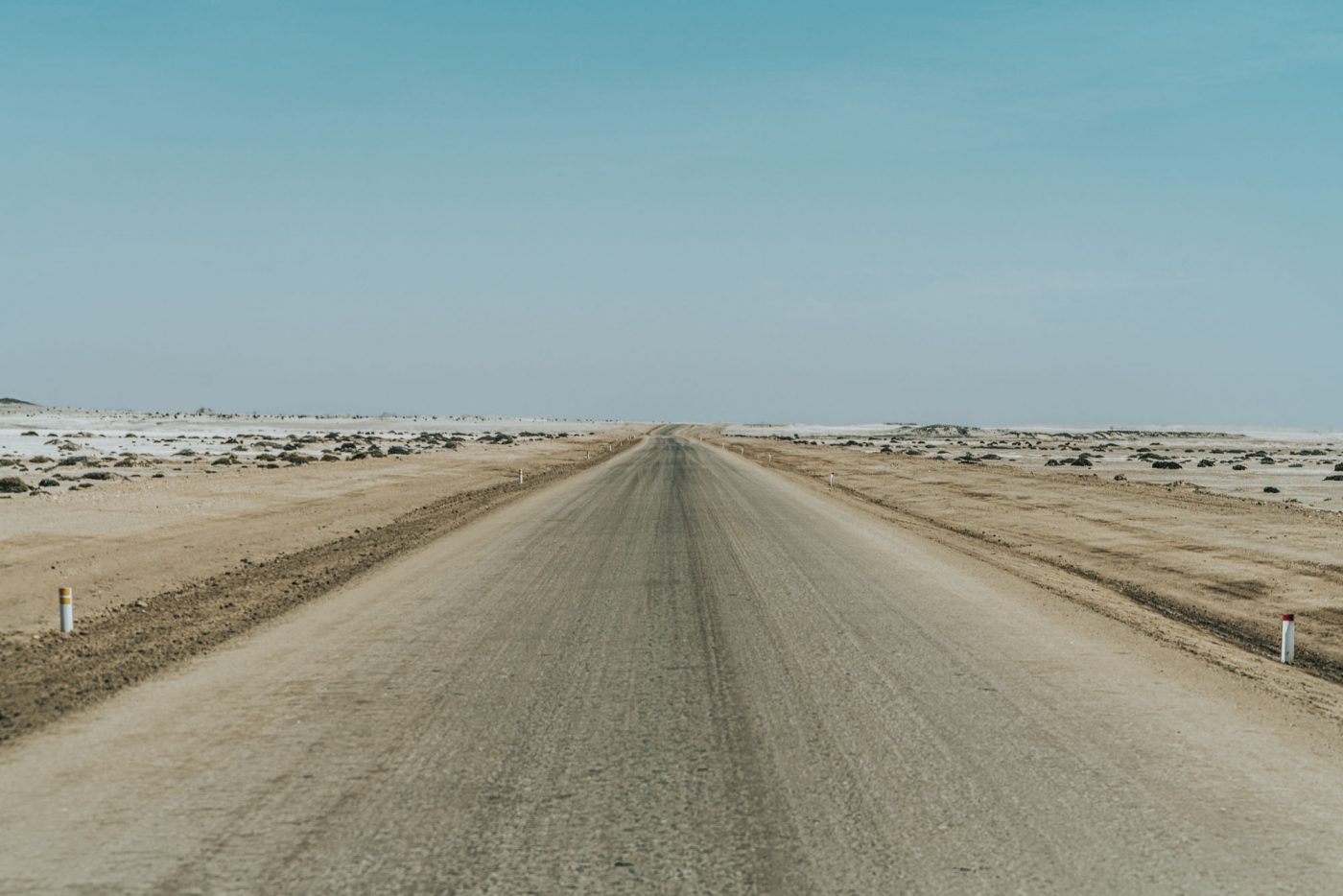 Driving along the Skeleton Coast in Namibia

However, the biggest challenge is the sand and precarious weather conditions which can make driving difficult if the winds pick up and blow the sand across the road. The park rangers at the entrance gate will be able to inform you of any change in conditions.

No matter what car you are traveling in, make sure that it is fully equipped with some essentials in case of a breakdown. Keep a set of spare tires in the truck along with the necessary tools and most importantly, information on how to change a flat in that particular vehicle. Jumper cables, tow ropes, and air compressors are also beneficial. Don’t forget a first aid kit and extra water and snacks in case your car breaks down and you need to wait for help.

From the early 1900s, diamonds emerged as the mainstay of the country’s economy and a mining town quickly mushroomed along the Namibia beach. However, the glittering deposits in the sand soon dried up and the mining industry moved on to a new area. 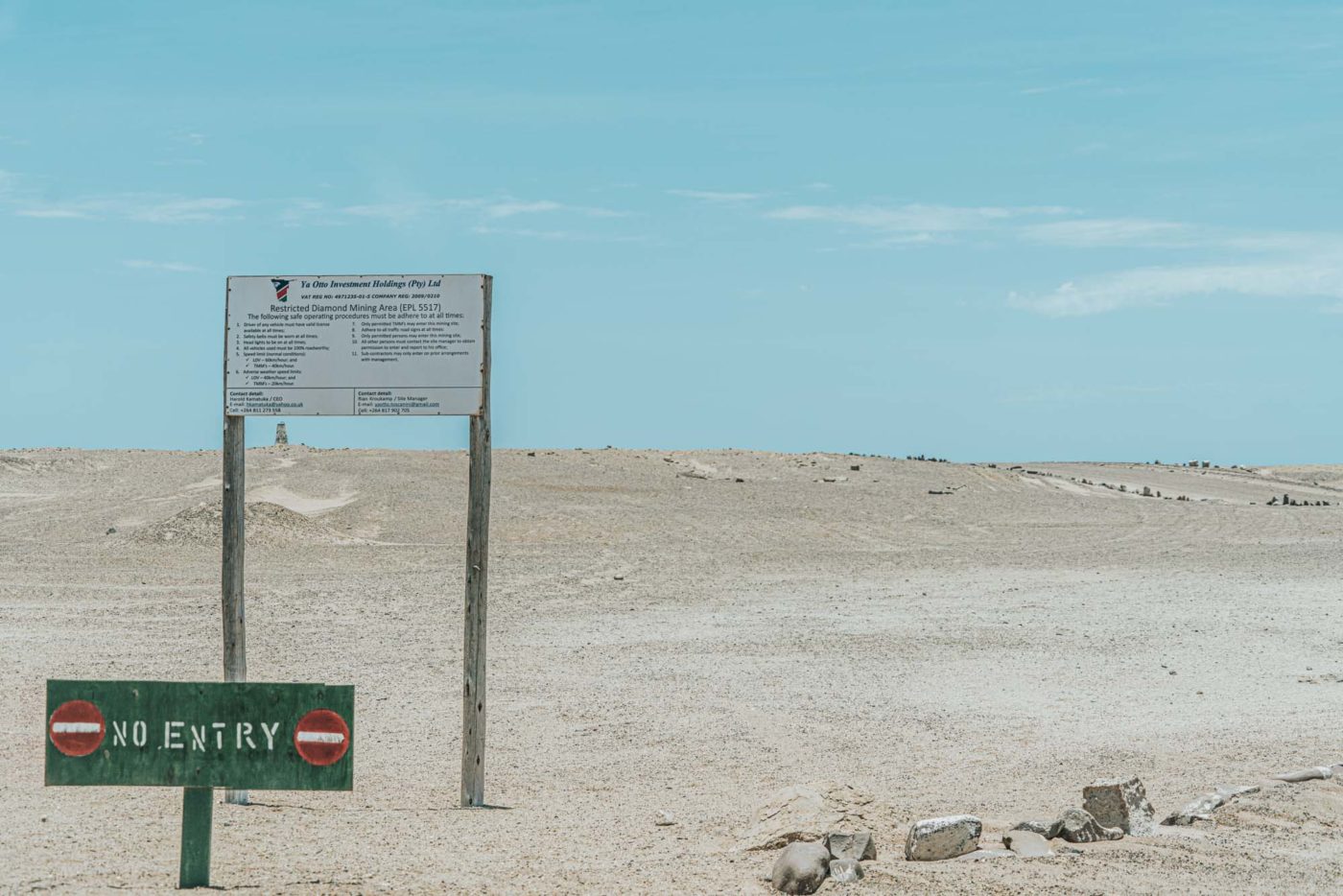 Now you can visit the abandoned mining town of Kolmanskop (in Namibia’s south) and the old diamond mining sites along the Skeleton Coast which are slowly becoming swallowed up by the sand.

Pay attention to signage, though, as many old mining areas are not opened to the public and are not safe to explore.

Check out the Collapsed Oil Rig

One of the most popular wrecks in the Skeleton Coast National Park is actually an abandoned oil rig rather than a ship. Just south of Toscanini Mining Site, a rusty oil rig from the 70s was left to collapse after prospectors found no sign of oil deep in the sands of the desert. 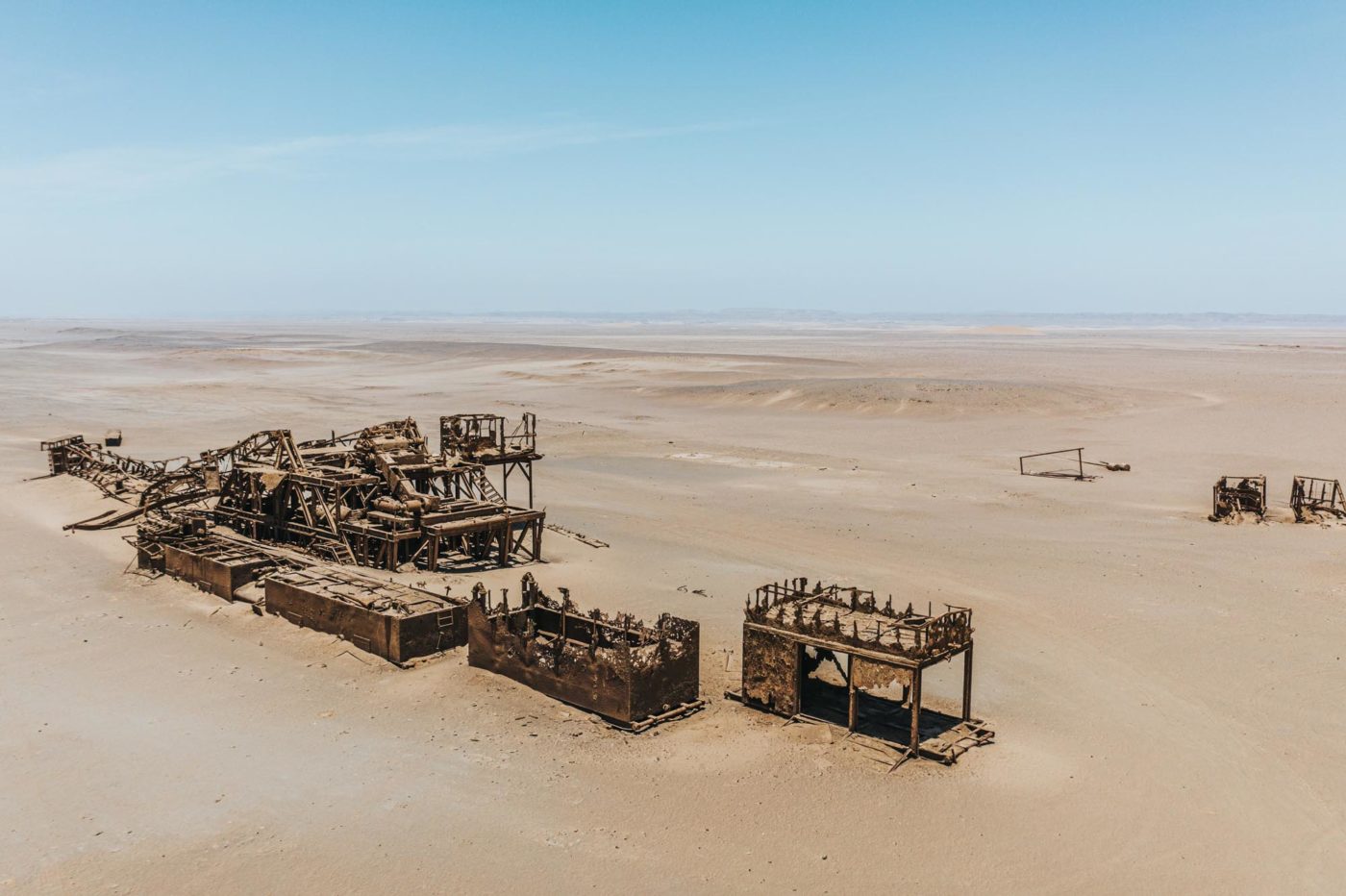 The oil rig is roped off, so we don’t recommend climbing on the structure (although we have seen others do it). Be cautious as the salty air has eaten away at the metal and it’s prone to collapse further into the sand at any moment.

The often foggy and unpredictable conditions along the Skeleton Bay, Namibia has caused thousands of ships to run aground along its shoreline. Most of the oldest Skeleton Coast shipwrecks have broken down and been lost to the sand and sea over time.

However, a few wrecks remain visible and attract visitors along the Skeleton Coast. The most popular ruins to visit include the Dunedin Star, which was carrying munitions for Allied forces in 1942, and also Winston, South African fishing boat built in 1961 that ran aground on 17 October 1970 about 23 km north of the Mile 108 campsite.

Another noteworthy wreck is, Zeila stranded on 25 August 2008 near a popular fishing spot about 14km south of Henties Bay. 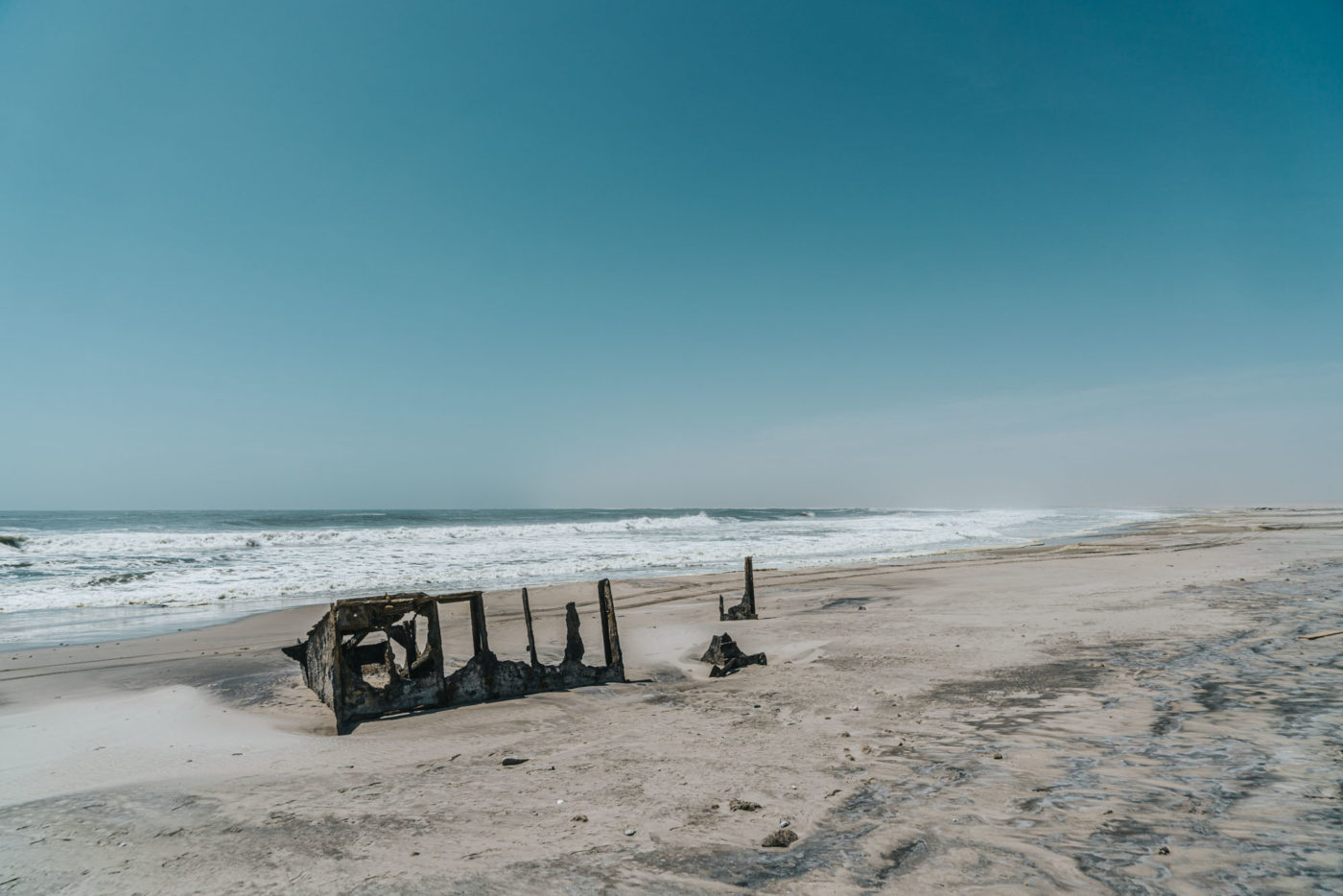 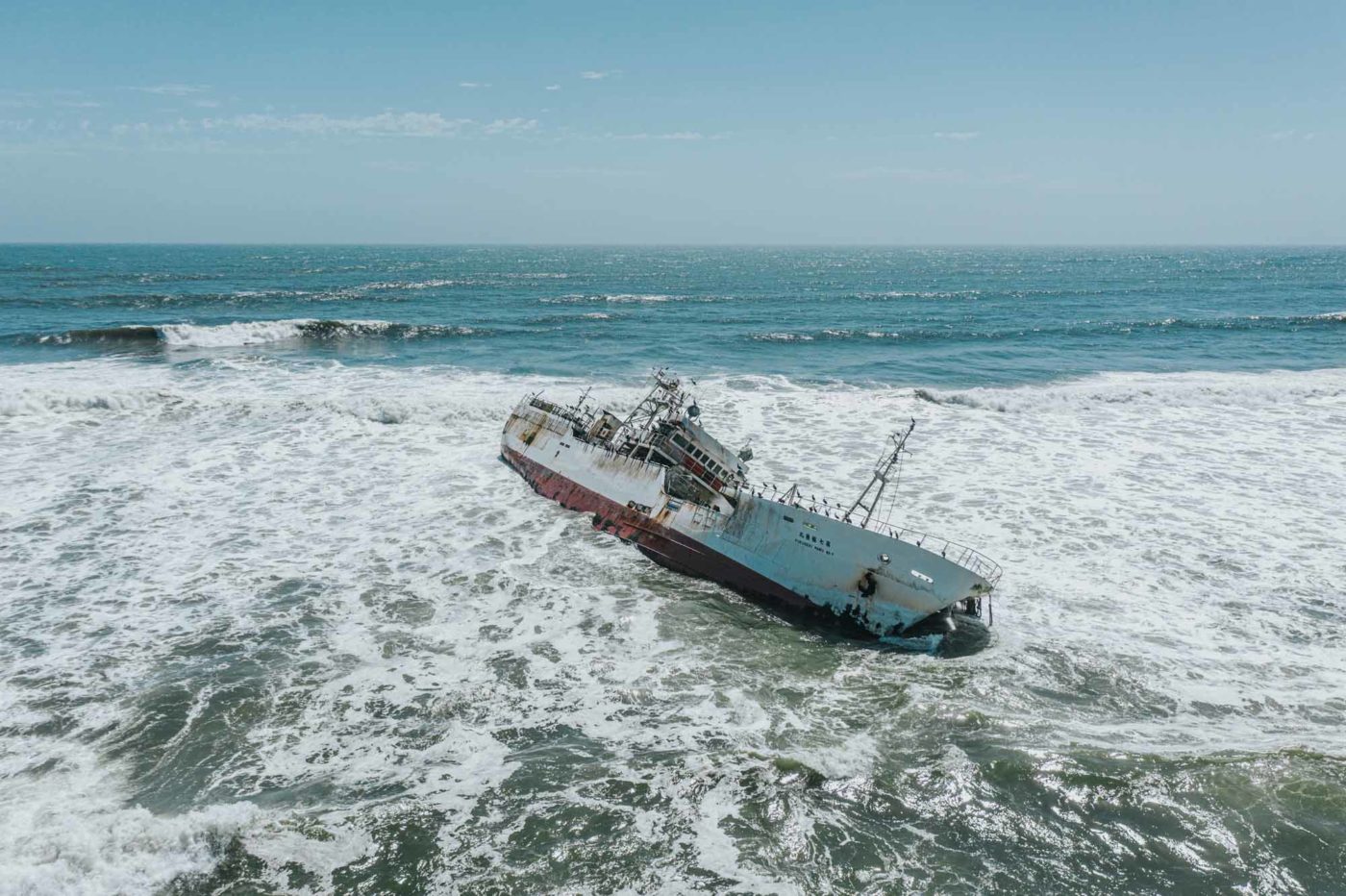 Look out for Desert Lions

It might be surprising that any wildlife could thrive at all in these wild, barren lands but desert lions have managed to adapt to the tough conditions of the Skeleton Coast. They are the only lions known to live off marine life, by eating fur seals, beached whales and birds. 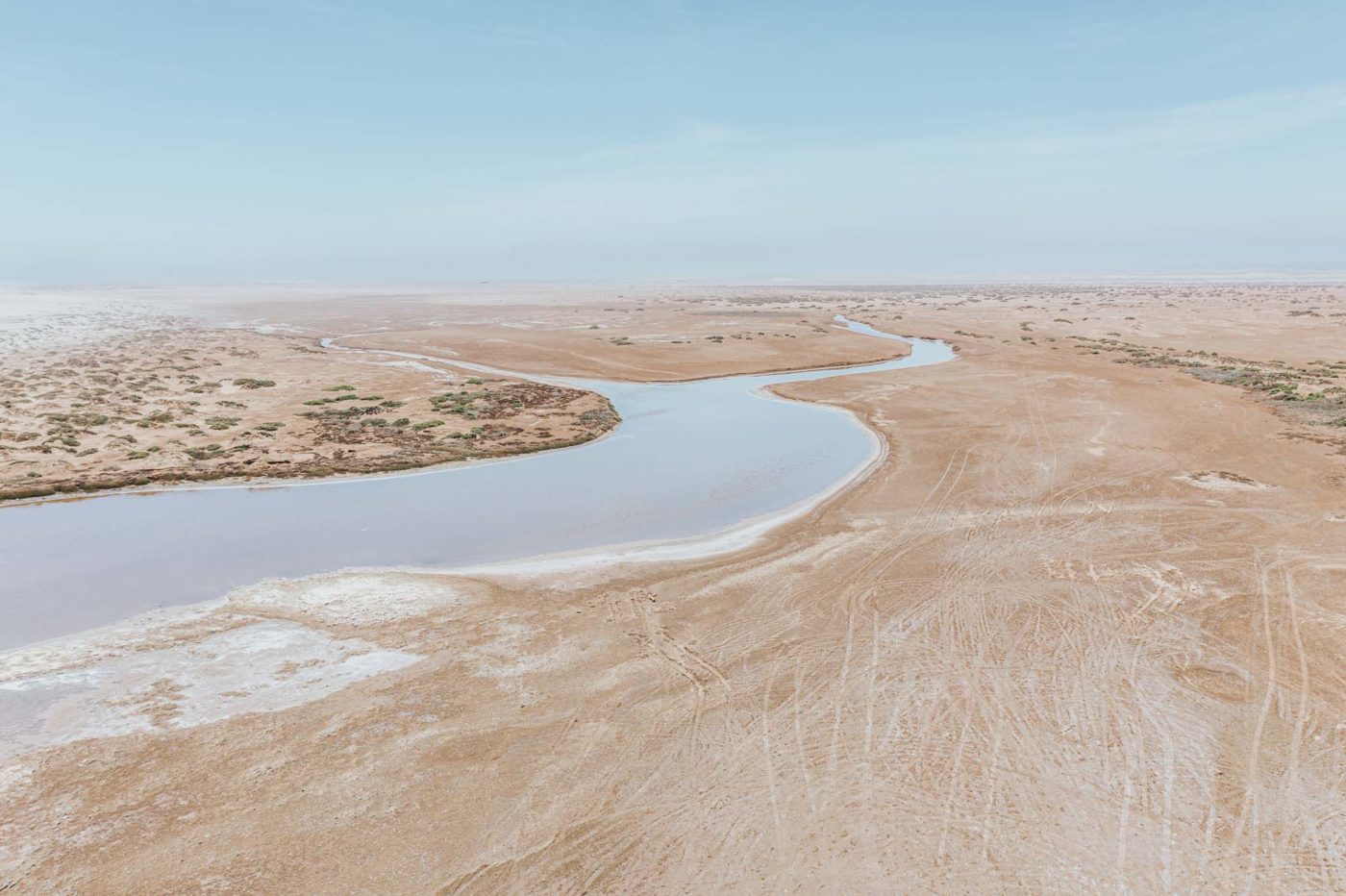 Desert lions have grown in numbers as control over the coast has tightened under national park regulations and its possible to see one of the roughly 100 Skeleton Coast lions roaming in the region. The lions are frequently spotted near the river beds, where warning signs remind visitors to stay in their vehicles at all times. 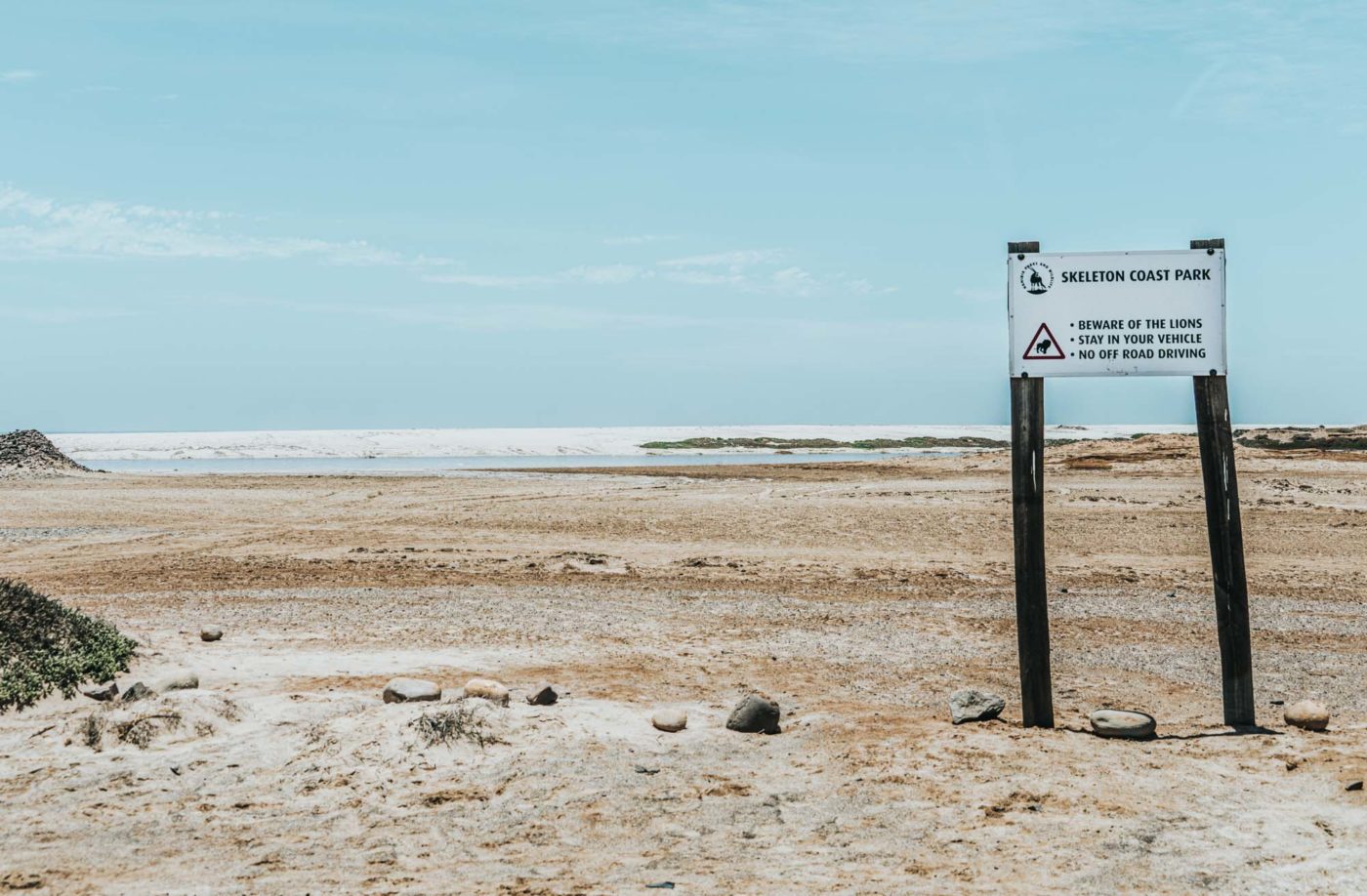 We were lucky to encounter a small desert lion pride just outside of the Skeleton Coast Park and learned quickly that these lions are not used to humans and can be quite aggressive. 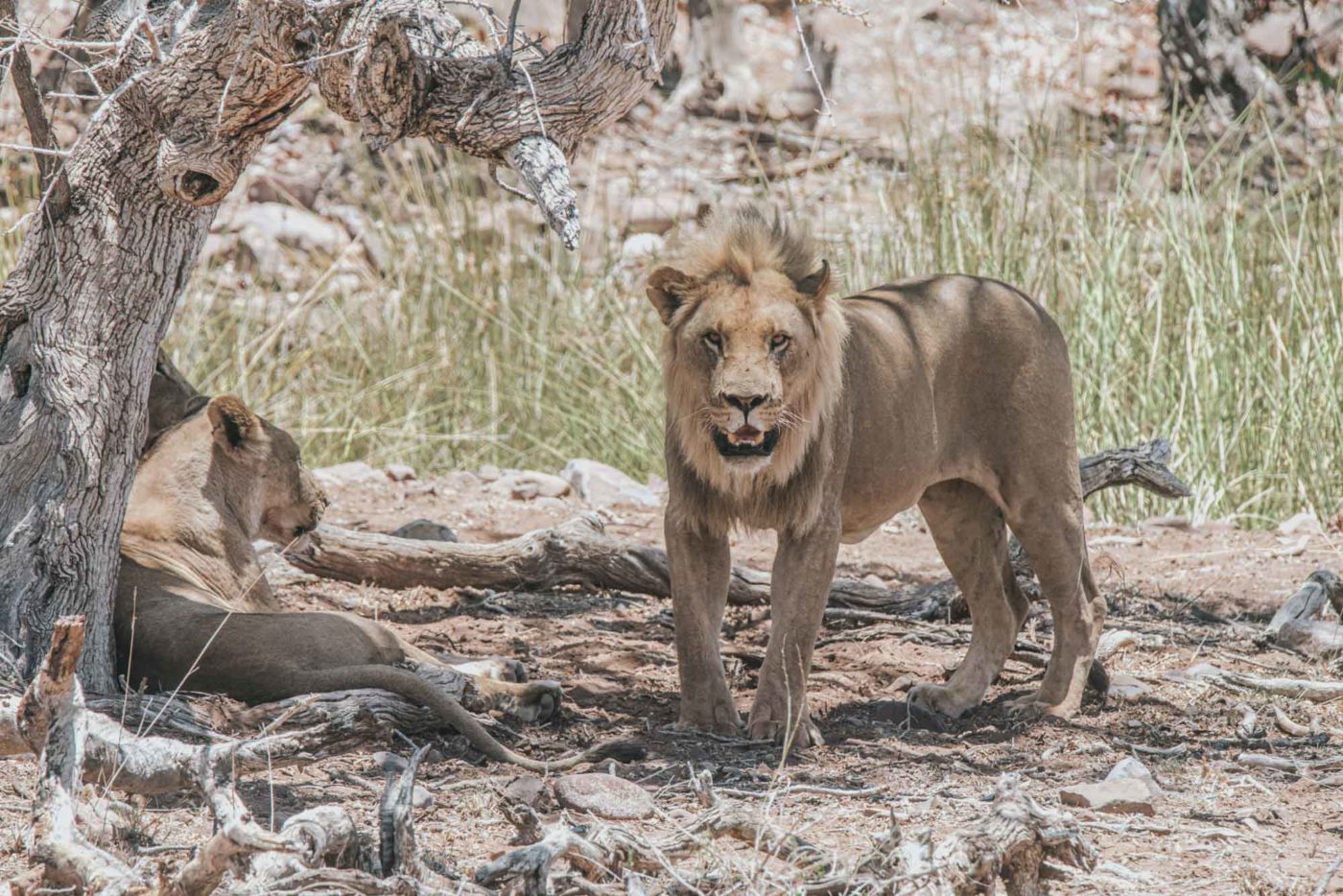 Desert lions in Palmwag, inland from the Skeleton Coast

Fishing is by far the most popular activity along with fishing spots dotted all along the Skeleton Coast. During the local holidays in December, Torra Bay campsite is particularly busy with fishermen, as are some of the less popular spots.

There are strict rules to follow as to where fishing is allowed inside the national park and most of the best spots require a 4WD to reach them.

South of the Skeleton Coast is the Dorob National Park, established in 2010, which is another area with many great fishing spots along the Namibian coast.

Cape Cross is home to one of the largest colonies of Cape fur seals. Thanks to the large concentration of fish available off the Skeleton Coast, this area serves as a great breeding ground for the seals and an excellent place to feed throughout the year. 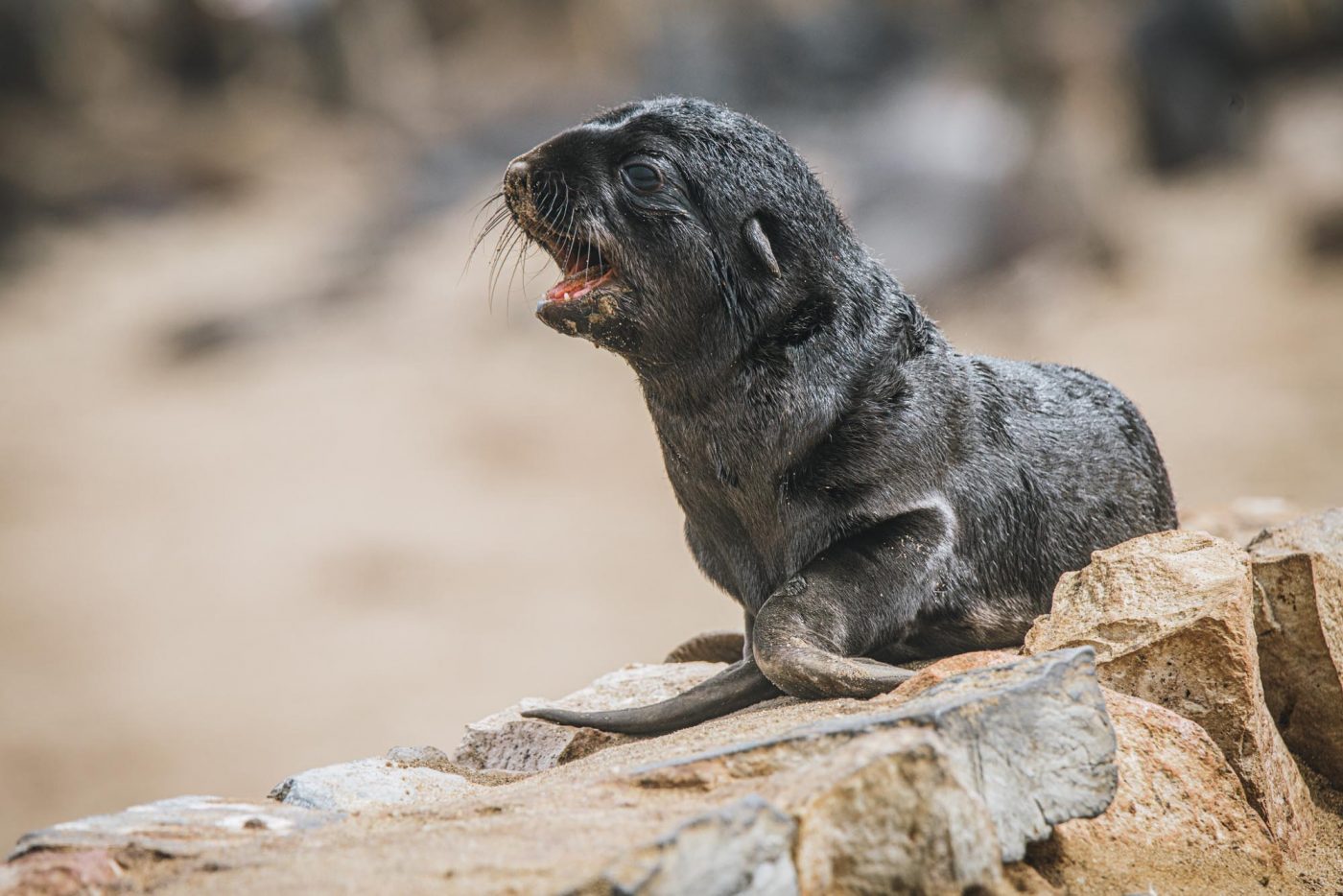 Fur seals can be found at Cape Cross any time of the year in great numbers. You can witness up to 200,000 seals basking in the sun on the beach.

It’s an impressive sight and is at its best in the pupping season, from December to January when Skeleton Beach, Namibia is also filled with young pups. Sadly, many of them do not make it past a few weeks, so the pup remains make it a less pleasant and rather pungent visit.

Cape Cross is located north of Henties Bay and inside the Dorob National Park, just south of the Skeleton Coast National Park.

The Namibia Skeleton Coast National Park is a protected conservation area which means there are certain permit requirements for visiting.

The northern part of the Skeleton Coast from Mowe Bay to the Angolan border is off-limits to tourists unless on organised and approved Skeleton Coast tours.

The southern part of the coast with entrance gates at Ugab Mouth and Springbokwasser require permits to enter. Permits can be obtained from the Ministry of Environment and Tourism Offices in Windhoek or Swakopmund or directly at the gates. You can ask for either a day pass or an overnight permit, however, you’ll need to show proof of reservation for either Terrace Bay Resort or Torra Bay rest camp if you want an overnight permit.

Day-trippers cannot visit Torra Bay or Terrace Bay but can simply use the main road to travel through the park. Overnight visitors cannot go further north of Terrace Bay, without a further special permit organized in advance from the National Parks office in Windhoek.

South of the Skeleton Coast Park is the Dorob National Park created in 2010, which is a coastal stretch of around 180km to Swakopmund and Walvis Bay. The daily park fee is N$80 per person (foreigner) plus N$10 per vehicle.

Visitors can enter the park from 7.30am but no later than 3pm. Unless you have an overnight pass, you must exit the park via one of the gates no later than 5pm.

Where to Stay in Skeleton Coast

There are a few accommodation options available inside Skeleton Coast National Park. The choices are limited but range from all-inclusive luxury lodges to camping. Skeleton Coast, Namibia is a popular destination for self-catering visitors, but those traveling without supplies, like we were, can also find accommodation in this part of Namibia.

Located in the Skeleton Coast concession, only 45 km from Möwe Bay, the Shipwreck Lodge is the most luxurious accommodation option in Skeleton Coast National Park. The shipwreck-shaped chalets are nestled between the dunes and offer a view of the Atlantic Ocean. The lodge can be reached in a high clearance or 4×4 car via Mowe Bay. The lodge offers daily pickups from Mowe Bay and transfers guests for the last 45 kms in a closed game drive vehicle.

This Skeleton Coast campground has around 60 sites with basic facilities. It’s only open in December and January and you must book a site via the NWR website. The sites are from N$230 per person and are fully self-catered.

One of the best Skeleton Coast accommodation options, this resort is on the coastline surrounded by dunes and offers beach chalets and double rooms with an onsite restaurant. Rates start from N$1188 per person and must be booked via the NWR website.

A tiny settlement near the Ugab River Gate with a petrol station (open in high season from November to March) and a campground with plenty of marked spaces as well as water and toilets. Prices start from N$500 per campsite of 6 people maximum during high season. 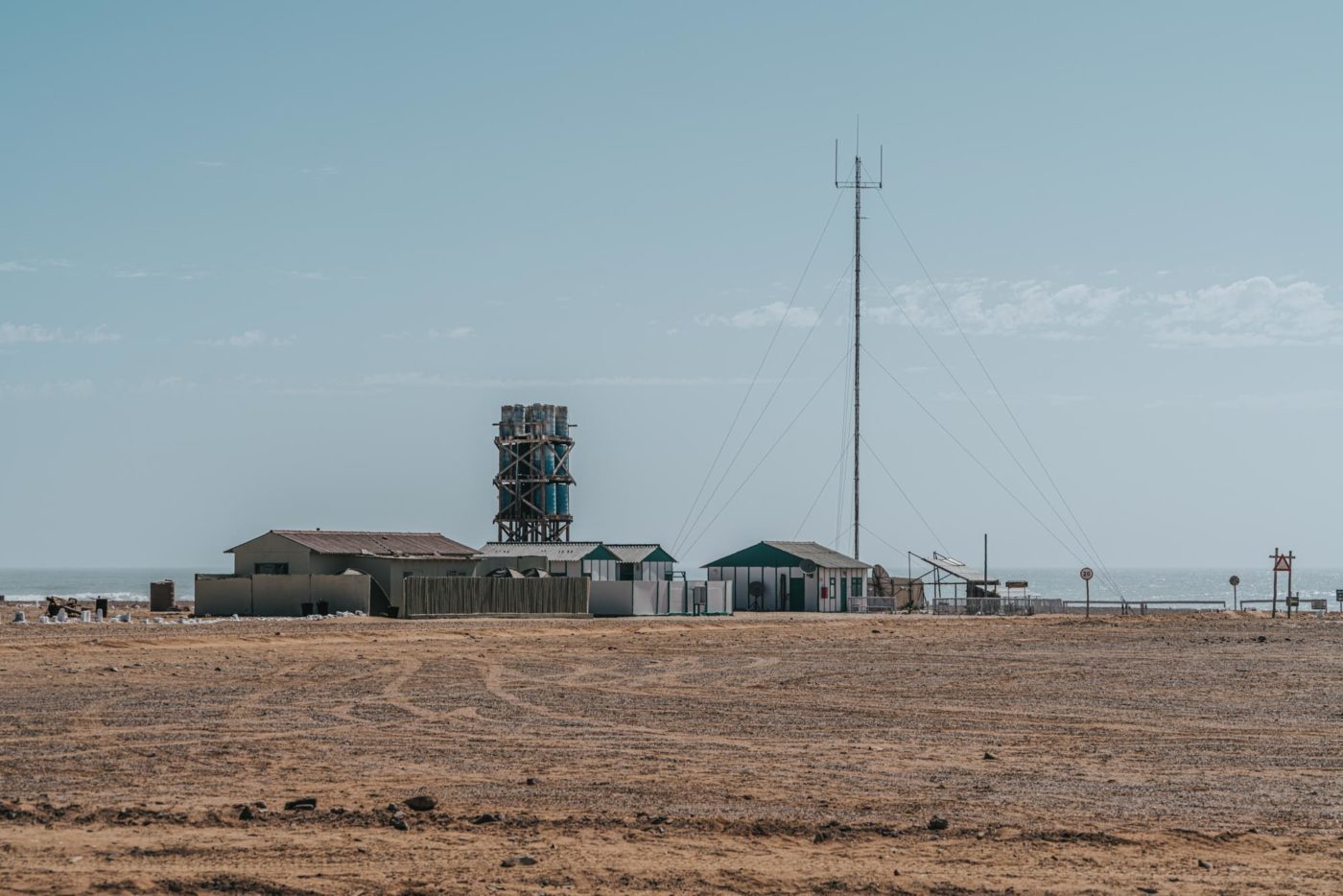 Another great accommodation on the Namibia coast with suites and cottages available for rent. There is an onsite restaurant and Skeleton Coast day trips and fishing tours are on offer. The lodge is located within walking distance of the Cape Cross Seal Reserve. 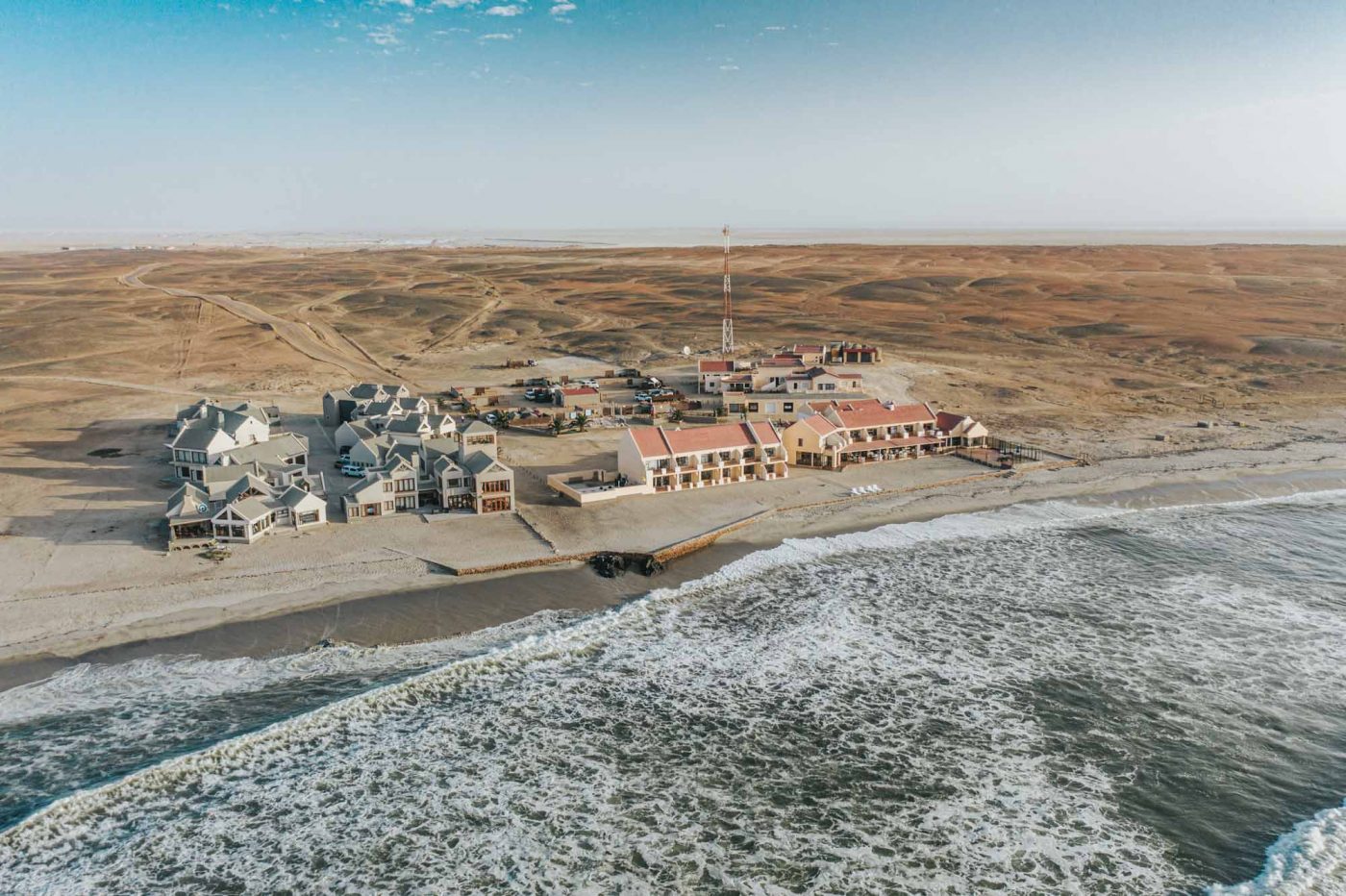 This nature reserve is halfway between Swakopmund and Etosha National Park and not far from Springbokwasser Gate making it a great place to stop for the night.

Grootberg Lodge just outside of Palmwag has eco-friendly chalets with beautiful views from the deck or infinity pool. 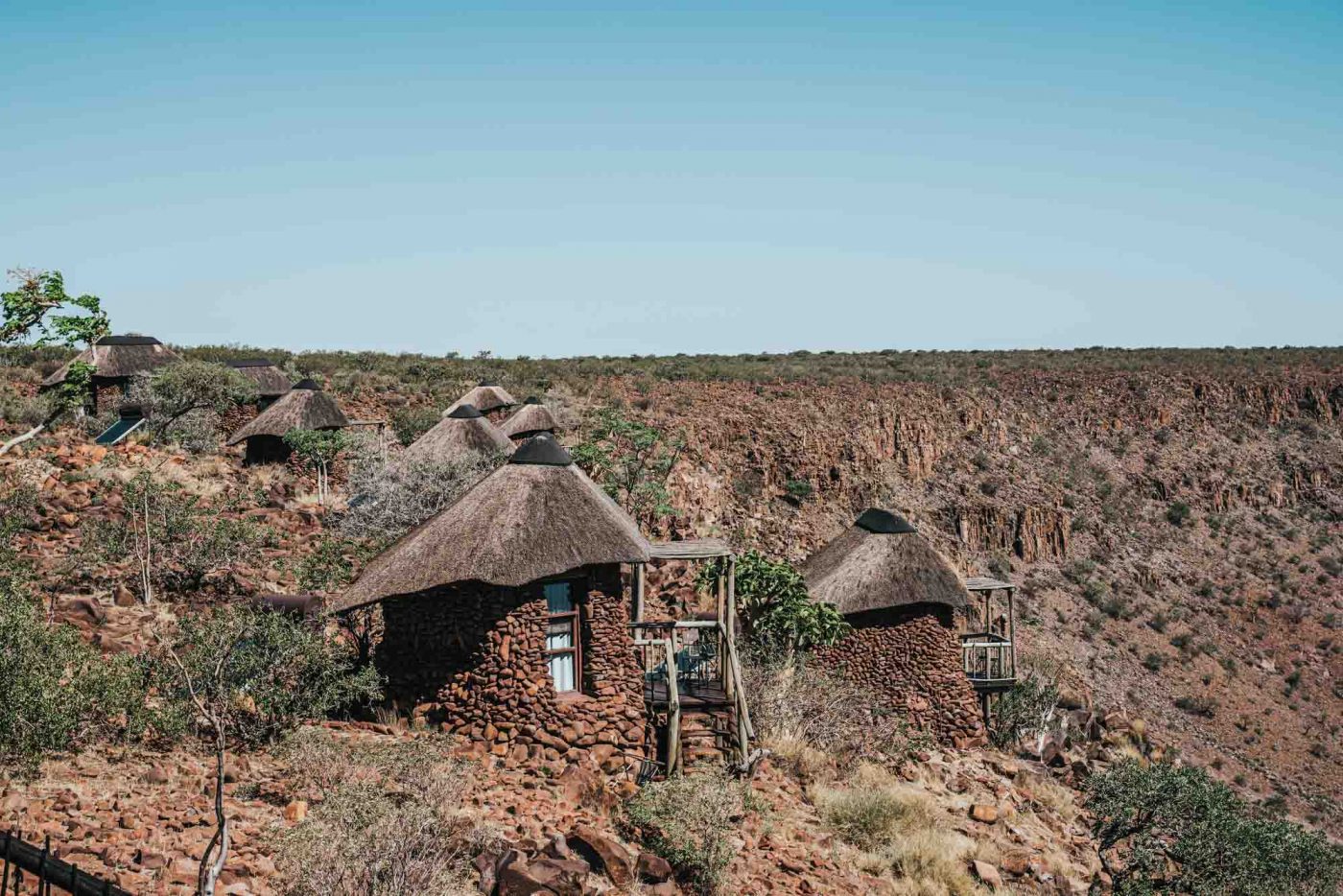 The Hoanib Skeleton Coast Camp is located in a more remote area with luxury tents with ensuites.

The perfect base for which to explore the Skeleton Coast and Namib desert, Swakopmund city has all the amenities for travellers and tourists whether just passing through from Windhoek to Skeleton Coast or staying the night.

READ NEXT:13 Awesome Things to do in Swakopmund, Namibia 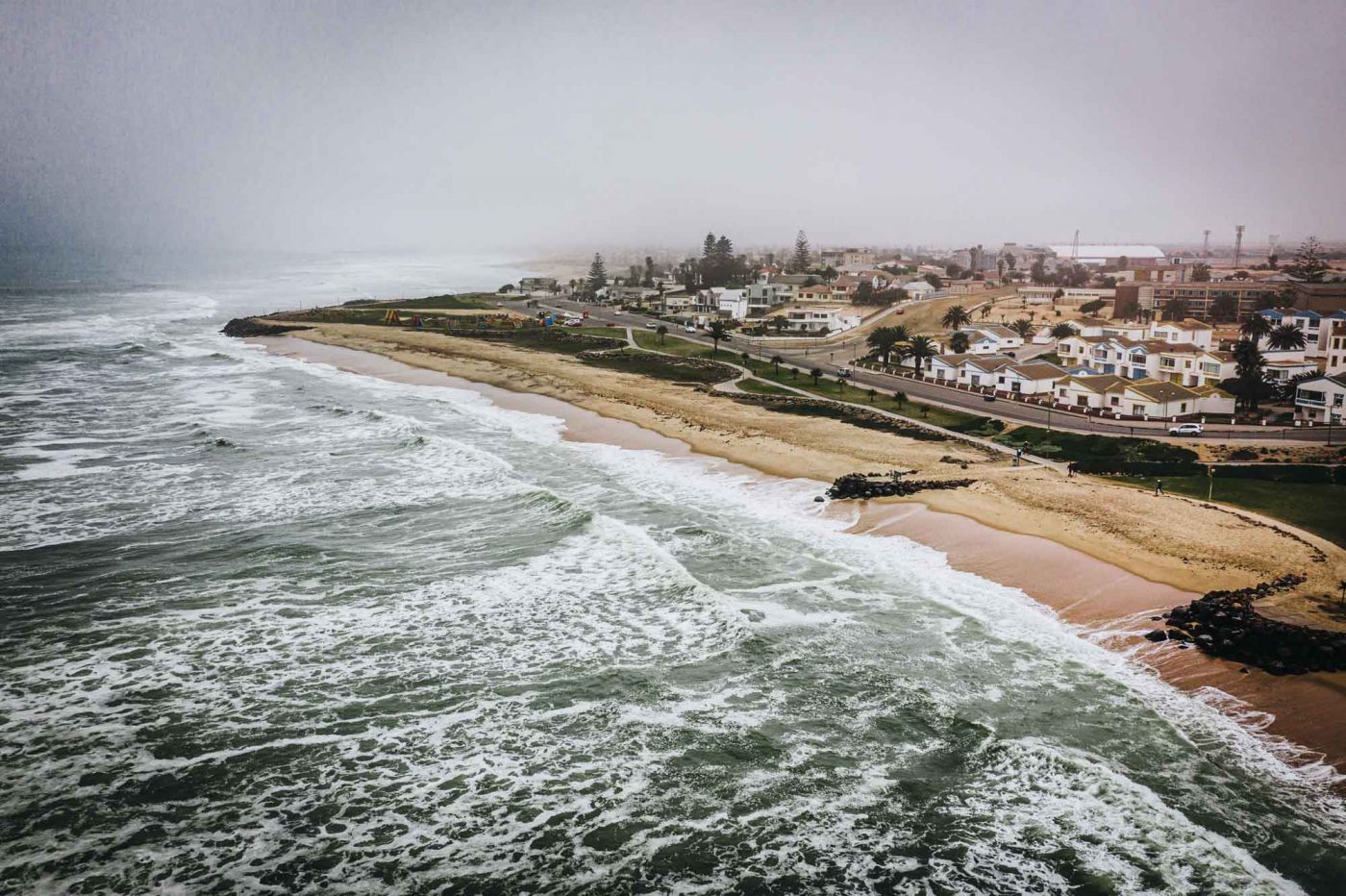 There are plenty of accommodation options in Swakopmund including Desert Breeze Lodge on the southern outskirts of the city and The Delight Swakopmund, an eco-conscious Gondwana Collection hotel conveniently located within short walking distance of the promenade.

Have you ever visited Namibia? Did you drive along the Skeleton Coast in search of shipwrecks and seals? What was your impression of this area?

We are Oksana & Max, a nomadic couple on a mission to promote sustainable travel practices. We travel in search of eco-conscious adventures, cultural experiences, and ways to make a positive impact on the destinations and communities we visit.