Salar de Uyuni (Bolivia Salt Flat) has long been one of the highlights of any South American adventure. The Bolivia salt flats are a beautiful place no matter the time of the year, which is exactly why some many travelers from all over the world make their way to the small town of Uyuni in search for the best way to experience this incredible wonder.

A Few Interesting Facts about the Uyuni Salt Flats

The Uyuni Salt Flats are the world’s largest salt flat and sit some 3.6 km (3,600m) above sea level and were formed by evaporated prehistoric lakes.

The flats cover a huge area, more than 10,500 square km (6,525 square miles). To give you an idea of just how large that is, it’s about the same size as Lebanon and can be seen from outer space!

There are two distinct seasons on the Uyuni Salt Flats. In the wet season (December – March), the Uyuni salt flats flood, creating a beautiful mirror that reflects the clouds and the sky. In the dry season (April-November), the ground dries up creating a white canvas under your feet.

The salt is also mined and used for consumption and building materials. But tourism to the salt flats is now a growing industry, and it’s easy to see why!

The closest city to the Bolivia Salt Flats is the city of Uyuni and it’s the starting point for almost all the Salar de Uyuni tours. There’s not much else to see in this small city, expect a small street market and the nearby train cemetery (more on this later).

A quick search online revealed that visiting the Uyuni Salt Flats independently wasn’t really an option. There is no public transport to Salar de Uyuni and renting a car and navigating the vast white canvas didn’t seem like the safest thing to do either. So we opted for an organized Salar de Uyuni tour.

The salt flat is located just 100km (62 miles) outside of Uyuni, so if you’re in a hurry you can still fit in a visit to the Bolivia salt flats. You can take a  quick day Salar de Uyuni tour. But there are also 2-day and 3-day Uyuni tour options that go beyond the Bolivia Salt Flat.

Time was on our side, so with the help of Find Local Trips we signed up for a 3-day Salar de Uyuni tour run by a local operator Red Planet Expeditions. We read the itinerary but didn’t fully comprehend the extent of what we would see over the 3 day Uyuni tour.

The sights and stops along the way blew our expectations out of the water! Who knew that Bolivia had so many incredible natural gems?

Luckily our Salar de Uyuni tour started at 11 am so we were able to arrive into Uyuni on an overnight bus and head off on the tour same day. We didn’t have to worry about finding accommodation in Uyuni, which isn’t the most interesting town.

Our 4×4 Toyota Land Cruise was packed to the brim with 6 passengers (us included), a driver and all of our gear. We were traveling in a bigger group of about 12, with the rest of the crew packed into another 4×4.

The first stop on day 1 was the Train Graveyard, located about 3km (1.85 miles) outside of the city. There the men unleashed their inner boys and hopped from train to train snapping pics along the way.

The trains at the graveyard are left over from 1940s when then-president Aniceto Arce’s vision of a state-of-the-art rail system came crashing down leaving this area with a whole lot of trains exposed to salty air from the nearby Salt Flat.

A short ride from the Train Graveyard was our lunch spot in the village of Colchani, located right on the outskirts of the Bolivia Salt Flats.

From there it was onwards to the vast whiteness. Blinded by the sun, our car sped along the Uyuni Salt Flats to find a spot to call our own (as you can imagine, we were not the only Salar de Uyuni tour in the area that day). 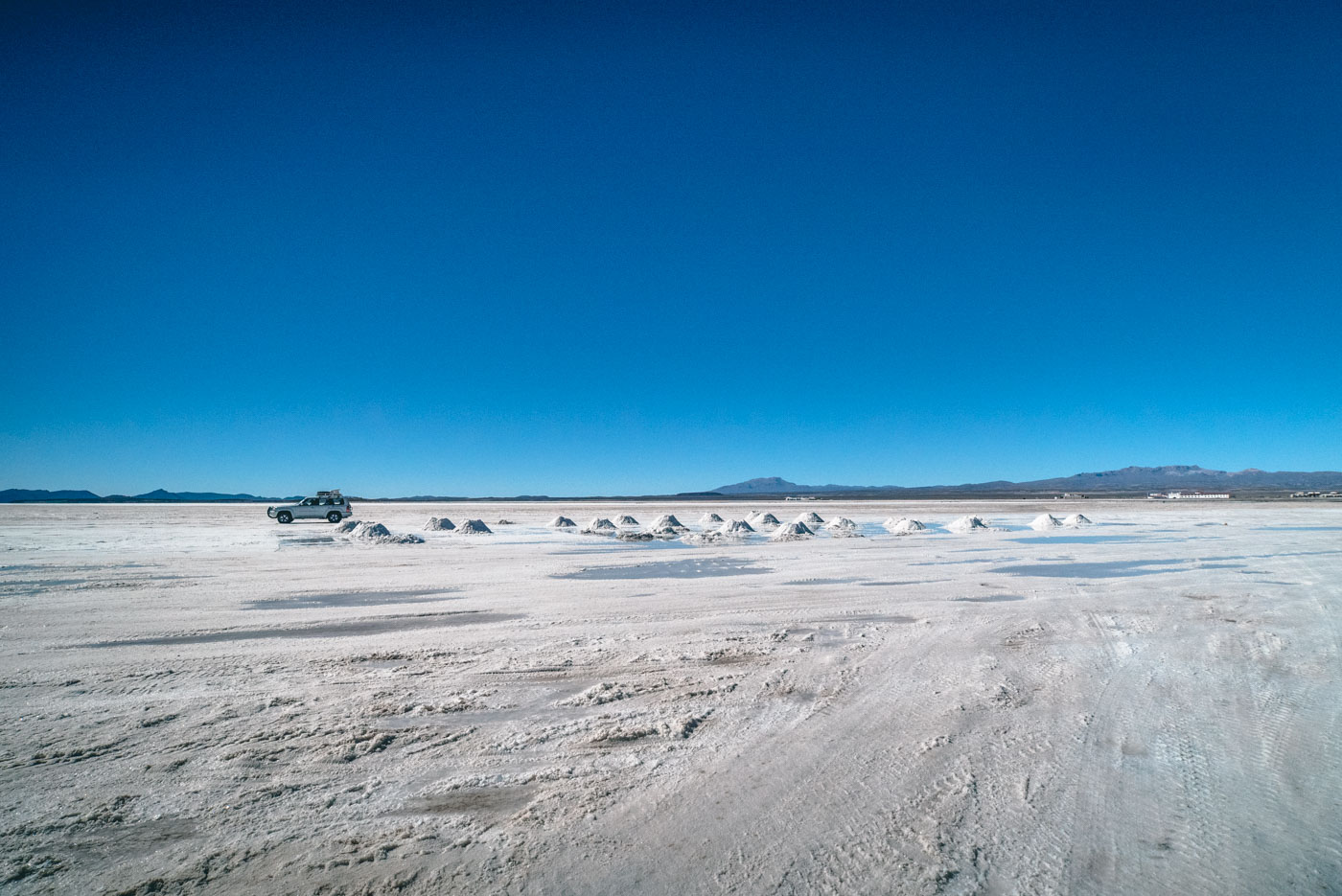 We continued to make our way across the Uyuni Salt Flats, stopping in a few more spots along the way including the Incahuasi Island that offered spectacular views of the flats from above.

That night we stayed at a small locally owned salt hotel in the town of Atulcha. Despite the fact that we were on the edge of the Bolivia Salt Flats with no civilization around us, the hotel had private rooms with a private bathroom, and comfy beds complete with warm duvet covers.

The floor was made of salt, as were the walls and even though the temperature dropped significantly overnight and the hotel offered no heating, we managed to enjoy a great sleep.

Day 2 of our Salar de Uyuni tour started with a bit of a disappointment, as we realized that today we would head further South and would not have any more time in the Salt Flat. But, luckily, the amazing landscapes of the day provided plenty of entertainment even without the Salt Flat.

The day took us through Southern Bolivian deserts like the small desert of Chiguana and the bigger Siloli Desert which sits at 4.5 km (4,500m) above sea level. We made a few stops to admire the views along the way and traveled further until we reached Rock Tree, a lava-cooled rock formation on the other side of the desert.

Lunch was served on the road and in the afternoon, we continued traveling south, stopping to admire flamingos at the Red Lagoon and the fumaroles of Sol de Mañana Volcano.

We spent the night in a basic hostel called “Efemes”. Thanks to the altitude (we were at well over 4,500m) the night felt much colder than the previous night. Hot soup and tea for dinner were much welcomed.

After dinner, we wrapped ourselves up in sleeping bags, grabbed a few chairs and drank coca tea underneath the stars. There was barely any light pollution and the Milky Way looked truly spectacular.

Tip: If you are looking for a hot shower on this leg of your Salar de Uyuni tour, venture 0.1km (100m down) the road to a set of natural hot springs.

Day 3 on our organized Salar de Uyuni tour was filled with more amazing views and stunning landscapes as we made our way further south to the Dali Desert. In the morning we visited the Green Lagoon and White Lagoon and shortly after lunch embarked on a little hike to a hidden gem in Bolivia’s south, a valley leading to the Black Lagoon.

We hopped atop rock faces peering into the Lagoon from the top, admiring the wildlife around us. It was a beautiful spot to end our adventure in South Bolivia and our Salar de Uyuni tour, and an amazing way to stretch our legs after many hours in the car.

The ride back to Uyuni took us along some familiar routes past the Lagoons, across the deserts and the Bolivia Salt Flats.

You can choose to return to Uyuni or make your way across the border into Chile. If coming from Chile, the same type of Uyuni tour can be organized from San Pedro.

Packing Tips and Other Advice:

It is possible to do the 3-day Bolivia Salt Flats tour without spending any time in Uyuni. Overnight buses from La Paz arrive in Uyuni at 5-6am giving you lots of time before the Salt Flat tour departs at 11 am.

A few cafes owners greet travelers at the bus stop and escort you to their warm cafes for breakfast and tea/coffee. The Salar de Uyuni tours arrive back in Uyuni around 5-6pm giving you time for a quick bite to eat before you have to board the bus back to La Paz at 8 pm.

When booking your tour ensure that you choose a reputable provider. We heard horror stories about drunk drivers, broken down cars, and groups getting lost in the Bolivia Salt Flats. We booked our tour through Find Local Trips and went with Red Planet Expeditions whose guides spoke great English, drivers were responsible and very caring about the passengers. We highly recommend them!

Preplan your Photos for the Salt Flats!

If you want cool perspective photos in the Salt Flat, bring props and pre-plan your shots ahead of time. You won’t have a ton of time for snaps while you are there. Keep in mind that in order to work well in photos, props need to be at least the size of your hand, anything smaller and you’ll struggle with depth of field and end up with blurry subjects. You’ll need to set your aperture to F20+.

Bring Snacks and Water for your Uyuni Tour

All your meals will be included but long days in the car make you extra hungry. You’ll pass by a few small towns with shops along the way but their selection is rather limited, so it’s best to buy snacks in Uyuni or even better in La Paz.

Don’t forget water. You can load up the car with 5L bottles to last you for the entire 3 days. Don’t rely on being able to buy water along the way.

Bring a Power Bar to Charge your Phone and Camera Batteries

We recommend this RAVPower Portable Charger that’s powerful enough to charge not just a phone but also camera batteries. You may have power at the first hotel but electricity will be limited in the 2nd hotel on your Uyuni tour. Remember that you’ll be spending most of the day in the car so a car charger will definitely come in handy.

You’ll be spending time at high elevation where temperatures drop quickly and drastically as soon as the sun goes down. Pack thermals for sleeping and to use as layers in the evening, warm sweaters, down jacket, gloves, scarf, and a hat.

Bring Your Own Sleeping Bag

You can rent one for the trip but those are never as good or as warm. We recommend North Face Aleutian that we used during our trip. It kept us nice and warm even on the coldest night on our Salar de Uyuni tour.

Have questions about Salar de Uyuni tours?  Or have any tips for visiting the Bolivia Salt Flats? Leave a comment below and we’ll gladly help you out!

Disclaimer: Our 3-day trip to the Salt Flat and Southwest Circuit was provided courtesy of Find Local Trips, but opinions expressed in this article are our own.