The government in Brazil works hard to keep the favelas across the country away from the tourists‘ eyes. They build walls en route from the airport into Rio to hide the favela stretching along the highway. They warn tourists about the dangers of drugs and violence inside the favelas and advise visitors to stay away from the areas. And the fact that the Zika virus has been spreading through Rio’s favela’s like wildfire hasn’t helped the case either.

All the signs indicated that staying in a favela during the 2016 Summer Olympics in Rio was probably not a great idea. But we decided to do it anyway…

This wasn’t our first favela rodeo. Back in 2014, when we visited Rio de Janeiro for the World Cup, we spent a night in Rocinha, the largest favela in Rio. It was an eye-opening experience, a look inside the real life of over 25% of the city’s population that currently reside in over 900 favela’s across the city. It was a step outside of our comfort zone, but one that gave us the confidence and the curiosity to experience life in favelas again.

And so we did.

This time, we opted to stay in a much smaller community just outside of the bohemian district of Santa Teresa, in a favela of Pereira da Silva. Perched up on the hill the favela was home to just 3,000 residents, but offered incredible sweeping views of the Sugar Loaf Mountain, the marina, and Rio de Janeiro’s skyline.

We rented a small simple room inside the favela, in a home that belonged to a British expat, Tom, a founder of the favela’s popular music project, Favela Brass. The kitchen and bathroom were shared between 4 other house guests while the living room was designated as a classroom for some 30-odd kids that took part in Favela Brass’ weekly music and English lessons. The space was filled with trombones, saxophones, and tambourines. English alphabet letters adorned the walls. A cupboard of school supplies was hidden inside a tiny storage room separated from the living room by a Brazilian flag. 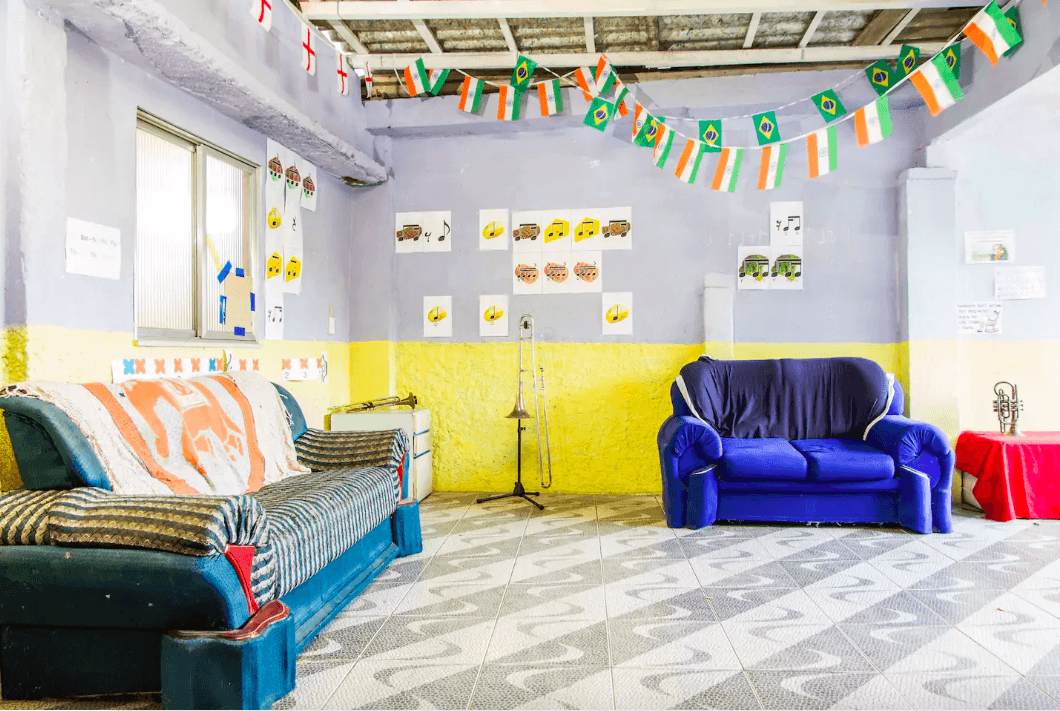 We arrived in Rio amidst the Olympic Games and Tom’s Favela Brass class was out daily showing off their musical talents at the Olympic Boulevard.

Throughout the day, the house was quiet and deserted. And so were the streets of the favela. Aside from a few stray dogs and some teenagers kicking rocks near the favela entrance, Pereira da Silva community had zero hustle and bustle that one might expect in one of the most densely populated areas in Rio.

“Is there anything we should know about safety in the favela”, we asked Tom on our first night in the city, prepared to hear about parts of the favela we should avoid and times of the day we shouldn’t be wandering around.

“Honestly, nothing ever happens in this favela,” he explained without an ounce of hesitation, ” you are safer in here than you are on the Main Street in Santa Teresa.”

We sighed with relief. From that point on, we let go of our hesitations and tried our best to mingle with the locals and get to know life in their community.

“Boa Noite”, we’d call out to the teenagers kicking empty beer cans at the entrance to the favela as we were coming back from a day of exploring the city.

We frequented the little restaurant in the favela, growing to enjoy the familiarity of its simple menu, a large TV with Olympic events playing in the background, and the friendly nods of acknowledgement from the owner. 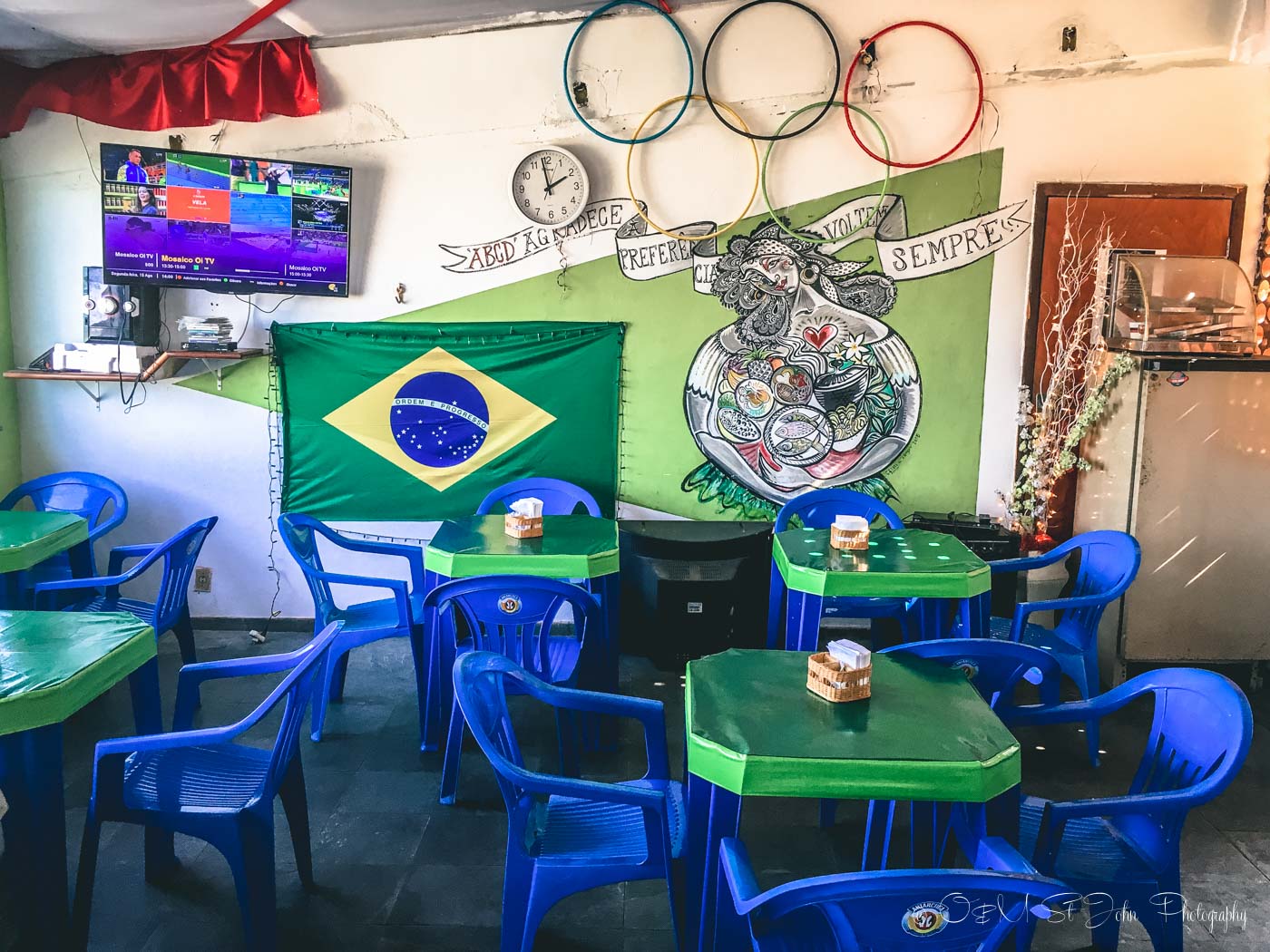 Every day that we spent in the favela, we learned more and more about its inner workings, but it wasn’t until we visited Project Morrinho that we gained a broader understanding of the complexities of the favela communities and the myths and misconceptions about life in these communities.

“Just 10 years ago, people didn’t come to favela to visit”, explains Cirlan Souza de Oliveira, the founder of Project Morrinho, as we walk through the narrow streets of the Pereira da Silva Community. “They discriminated against the people here. But now it’s different. There is still some drug dealing, but no shooting. Now it’s more quiet, safe here. So more people come.” 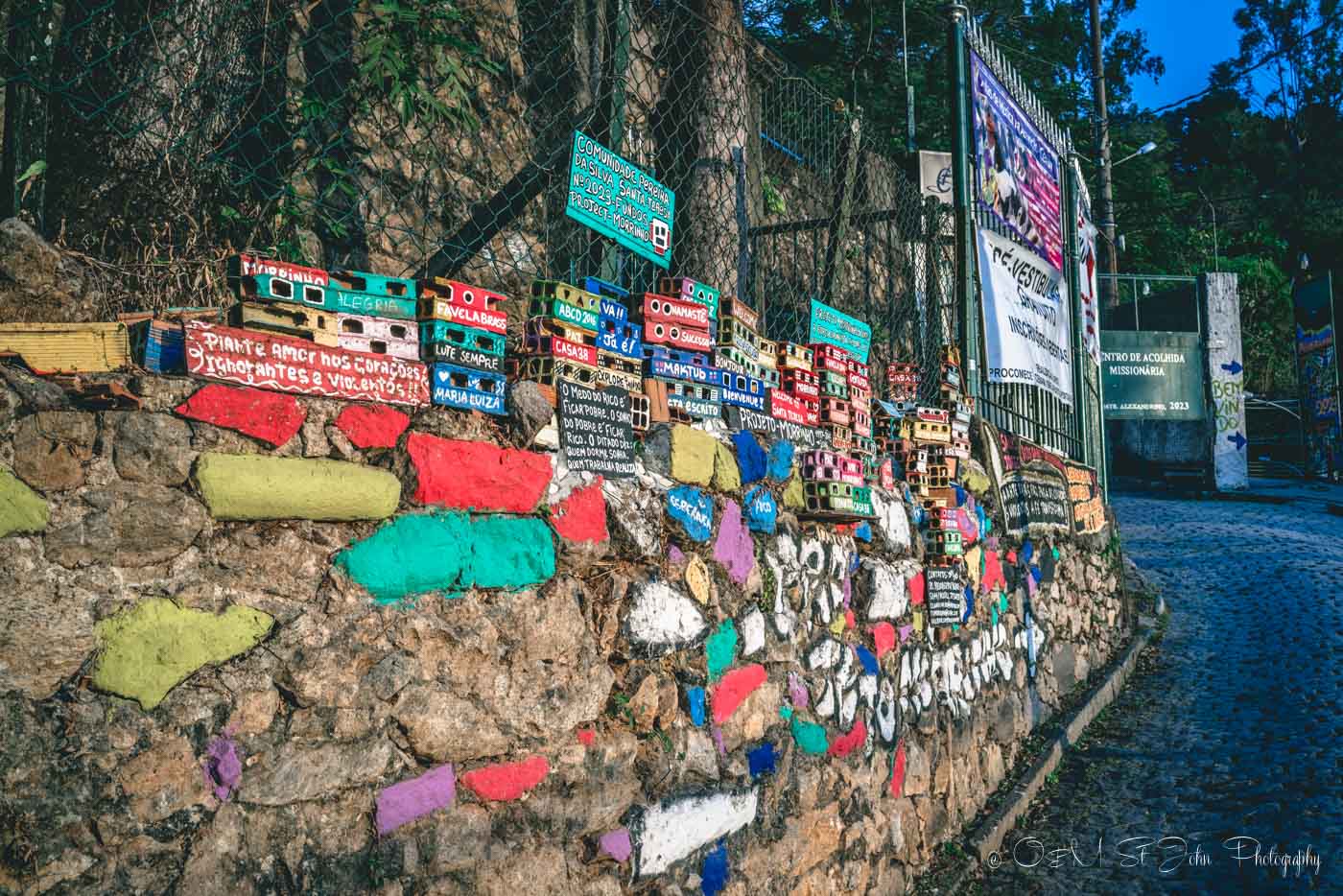 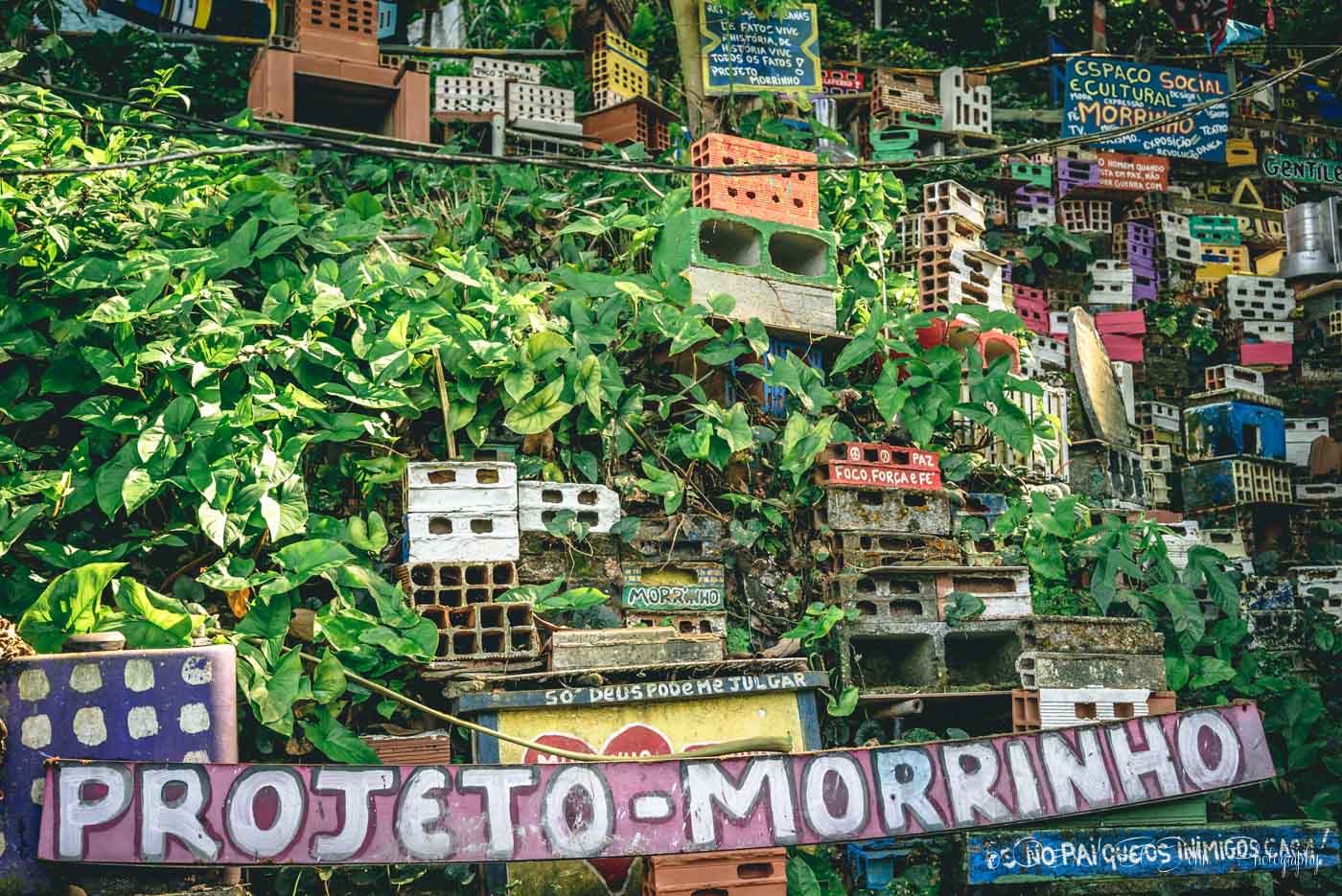 Today, Project Morrinho (little hill) a social and cultural initiative that started in this community back in 1998, plays an important part in educating locals and visitors about the realities of life in the favelas.

The project started as nothing more than child’s play, an attempt to escape from the realities of violence and corruption in the favelas across Brazil. With the help of some bricks, toy cars, Lego pieces, and other recycled materials, Cirlan and a few friends constructed a replica of the favela complete with people, cars, and colourful buildings. Over the years, the model increased in size to occupy over 320m², growing to represent not just Pereira da Silva, but many other favelas in the city.

In mid-2000, the project got some press and Cirlan’s story and the story of the favela model on the hill spread across Brazil and beyond,  bringing the realities of life in the favelas to the surface and putting more pressure on the government to improve the lives of those living in these quarters.

“If we didn’t start the project, I think things would be different for me and my friends“, Cirlan continues

“Before, police think that everyone in Favela is suspect. There were no opportunities, no education. But we didn’t start this [project] for job or for fame….we were just some kids, playing.” he points at the sprawling brick model structure in front of us as we finally reach the location of the Morrinho model. Hundreds of painted bricks carefully positioned on top of each other. The lego men and the toy cars look old but still intact.

“Today things are different in the favela, but there is still no work. You want to have work in the favela, you create work. There are some restaurants, hostels, shops. People find way to make money”

Max and I exchange glances recalling walking past a few shops as we explored the favela over the last few days. It was a relief to know that our stay in the favela and every one of those meals we’ve had at the local restaurant has gone to help a few members of this community.

As the tour came to an end, we struggled to peel ourselves away from the complex favela model, fascinated by the intricate details of its design. It really was a piece of art worthy of a place in art galleries and  exhibitions all around the world.

Learn more about Project Morrinho in our new video below!

Throughout our time in Rio, our humble home in the Perreira da Silva Favela served as a constant reminder of the economic divide that exists in Brazil. The glitz and glamour of Copacabana Beach, of boutique shops in the bohemian Santa Teresa, and upscale restaurants in Ipanema, contrasted against the simplicity of coming “home” to not much at all.

We won’t pretend like we really understood what it’s like to be in the shoes of locals that have been living in this community all their life. But our experience staying with Tom at the Favela Brass house and our visit to Project Morrinho has given us another perspective on the fabulous city of Rio de Janeiro.

Do you do anything during your travels to get a better understanding of what life is like for locals? Leave a comment at the bottom of this post and let us know! 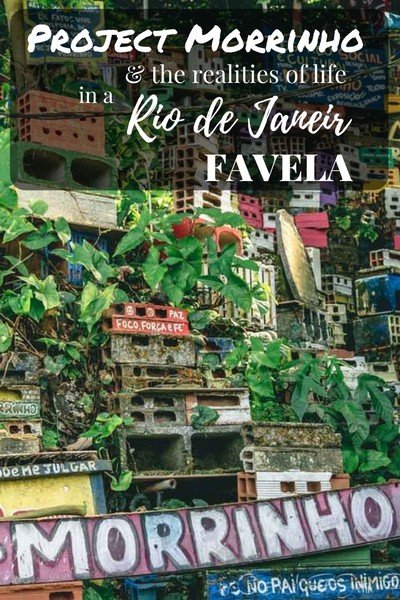