This post was first published in 2015 but has been updated in 2019 with the most recent information on morroccan mint tea.

We remember the first time we tried Moroccan mint tea in Tangier.

“Deux thés à la menthe,” – Max ordered, as we sat down for our first Moroccan meal in Café Tinjis, a local institution found in the heart of the Tangier medina.

Within minutes a tray with two mint teas and 2 stacks of pancakes appeared in front of us, a traditional breakfast that we quickly learned to enjoy in Morocco.

We took our first sips of the mint tea, savouring every drop, carefully isolating the flavours that hit our taste buds. It was sweet, too sweet, but the tantalizing mint aroma seemed to balance out the nauseating rush of sweetness. The fresh bunches of mint were floating at the top, releasing more and more flavour into our glasses as we drank. They don’t call it Berber Whiskey for nothing. The taste was addictive.

“I think I am going to like this tea”, Max announced a few sips later.

Over the course of the next 2 weeks, we slowly but surely perfected our mint tea order. Our favourite was the kind with a green tea base, with a little bit of sugar, and one or two mint leaf bunches. “Peu de sucre, pas beaucoup de menthe”, we would ask in our broken French. A little bit of sugar, not too much mint. 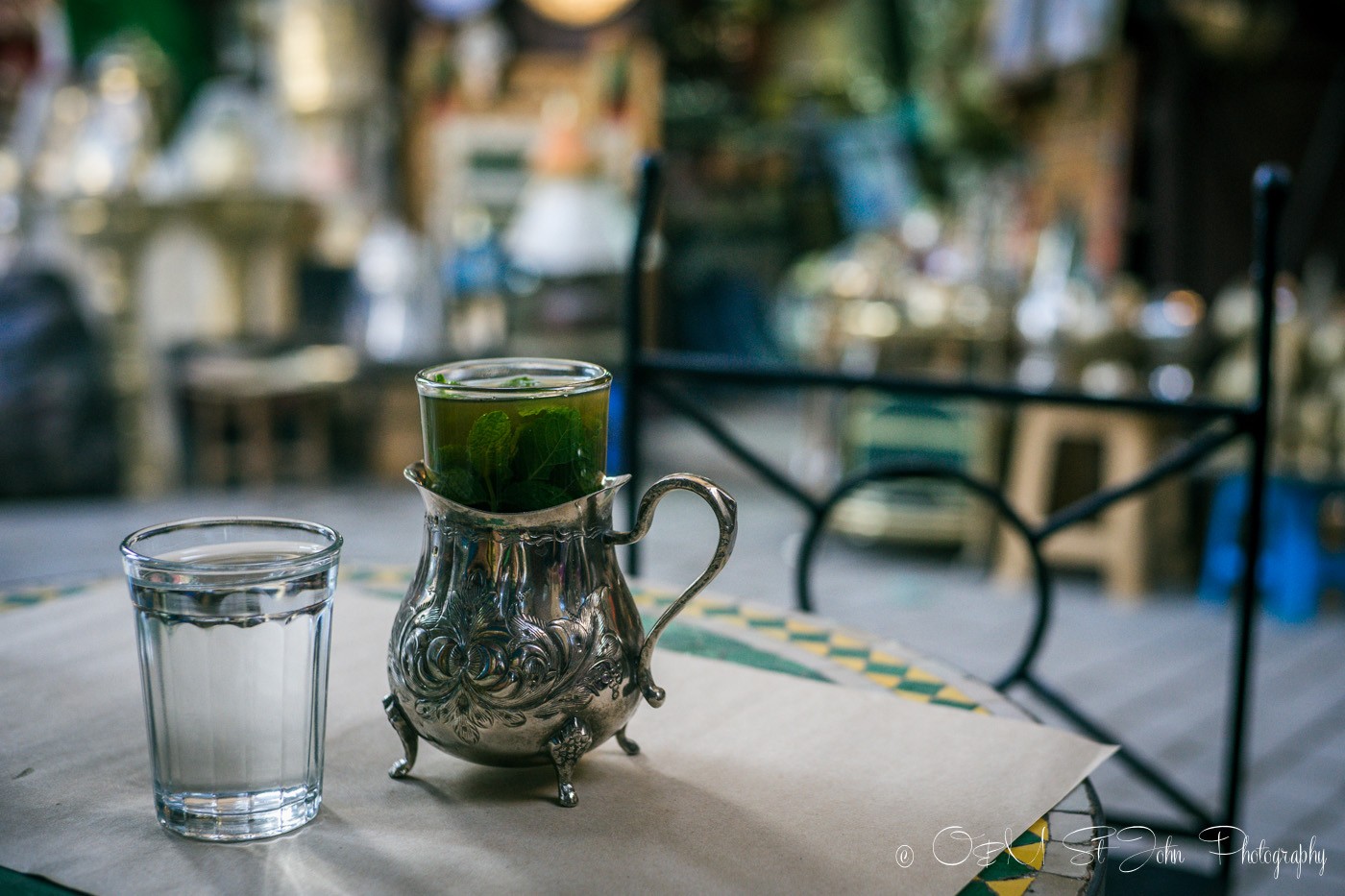 We learned that as sickening as Moroccan sweet mint tea was, mint tea without sugar just didn’t have the same taste. Something about the sweetness actually punched up the flavours of the tea that were lost in the sugarless varieties. Through trial and error, and later through careful explanations from a local tea producer in Marrakech, we also discovered that there is actually such a thing as too much mint. And that mint that’s heated along with the tea base can even turn bitter and completely ruin the mint tea experience.

We drank Moroccan mint tea 4-5 times a day, in the morning with our breakfast, at lunch, at dinner, and a few times in between, and despite our fears, we never got sick of it. Most riads welcomed us with a cup of tea and a bowl of peanuts, and even in the desert, Berber Whiskey was just as delicious!

The History of Moroccan Mint Tea

Moroccan’s famous mint tea is a symbolic drink for the Moroccan culture. Steeped with spearmint and served several times a day with a variety of foods, this drink is regarded as a welcoming gesture and the staple of the Moroccan social life.

More commonly known as Maghrebi mint tea, Moroccan green tea originated in the Maghreb region. It has since gained popularity all across Northern Africa in countries such as Libya, Tunisia and Algeria. Maghrebi Mint Tea plays an important part in social life as it’s often served to guests and during special occasions.

It’s not known when the Moroccan green tea has originated as there’s no exact date for its introduction in Morocco. According to one tale, it was introduced between the 17th or 18th centuries during the reign of Ismail Ibn Sharif.

There is, however, a recorded description of a Moroccan tea ceremony in the 1840. In addition, during the Crimean War in the 1850s, the British East India Company diverted tea meant for the Baltic states to Morocco, leading to a further increase of its availability. By the early 20th century, mint tea had spread all over Morocco.

Where to Buy Moroccan Tea

4 thoughts on “Our Love Affair With Moroccan Mint Tea”