Nyiragongo Volcano Trek: The Most Dangerous Hike in the World

Nyiragongo Volcano in Virunga National Park looms large over the city of Goma in the Eastern Democratic Republic of Congo. It is often called the world’s most dangerous volcano, and the smoke that billows out its top is a constant reminder of the world’s largest lava lake that rests at its core.

We couldn’t miss an opportunity to hike to the Nyiragongo Volcano during our visit to the DRC in 2017. Our experience ended up being as exhilarating and unique as you can imagine.

Sleeping beside an active volcano is definitely an activity that makes you appreciate the power of nature more than anything!

Nyiragongo Volcano has been known to be erratic and has caused some devastating damage to the densely populated areas around the volcano over the years.

Since 1882 there has been upwards of 34 eruptions. During some of those instances, some of the activity continued for well over a year. 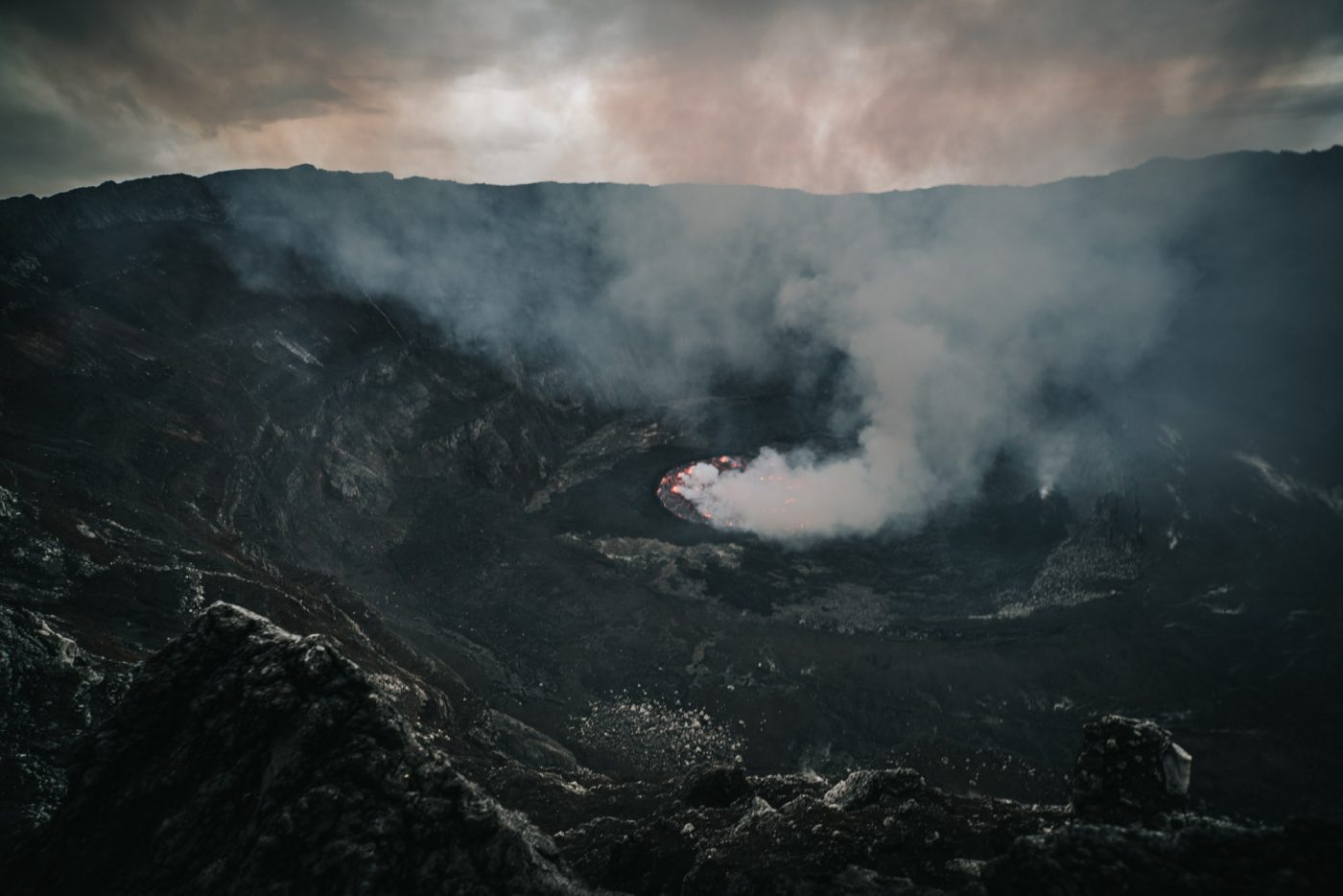 The 2002 eruption was a wake-up call to the people of Goma. The fast flowing lava claimed the lives of over a hundred people and destroyed the homes of countless others when a fissure opened up in the side of the volcano.

Fun Fact: in 1977 the walls around the lava lake cracked and lava came pouring down the volcano’s slopes at 97km (60miles) an hour.

Nyiragongo Volcano is considered to be one of the most active volcanoes, erupting on an average of every 30 years. When it is not on the edge of erupting, adventurous hikers can climb 3.5km (2 miles) to get a look at the lava lake at the top. 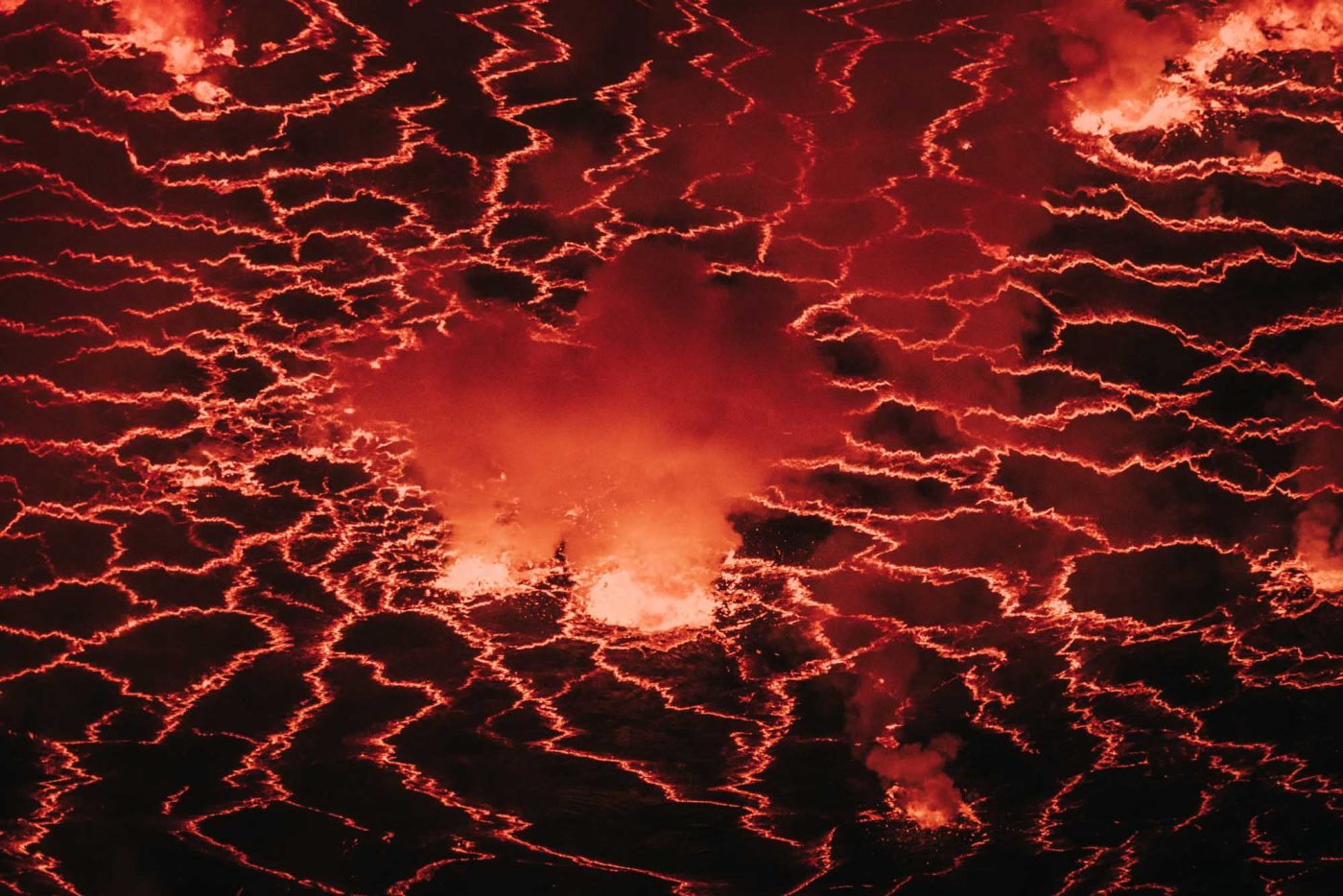 Near the volcano, gas can seep from the ground cause carbon dioxide toxicity in people especially with lack of airflow in some areas. This can be very deadly to those around the gas seeps and unfortunately, there has been an increasing amount of victims in recent years.

Since then the town has been educated on the deadly effects of the volcano, and a team of scientists monitor the volcano for seismic activity 24 hours a day, 7 days a week. At the time of the eruption, many people did not understand the way lava could slice through the countryside and many even ran towards it out of curiosity.

Despite all this, in recent years, Nyiragongo Volcano has become a top attraction for visitors to the troubled nation. Overnight hiking safaris take visitors to peek into Nyjiaragongo’s impressive, gurgling crater lake.

Nyiragongo Volcano Trek is a 2-day hike that takes place inside the Virunga National Park.

We certainly wouldn’t call Nyiragongo Volcano Trek a walk in the park. The trek is 8 km, with some 1000m in elevation change and takes around 5-6 hours to complete with 4 breaks to catch your breath and refuel along the way.

The path winds through beautiful green rainforests at the base of the volcano then past blacken trees and other lava formed landscapes. Much of the path is made up of lava rumble left over from past eruptions and the final half hour is a scramble to the top.

The views at the top are spectacular, but the volcanos most impressive sighting happens right around sunset when hot lava gurgling at the bottom of the caldera becomes that much more visible. 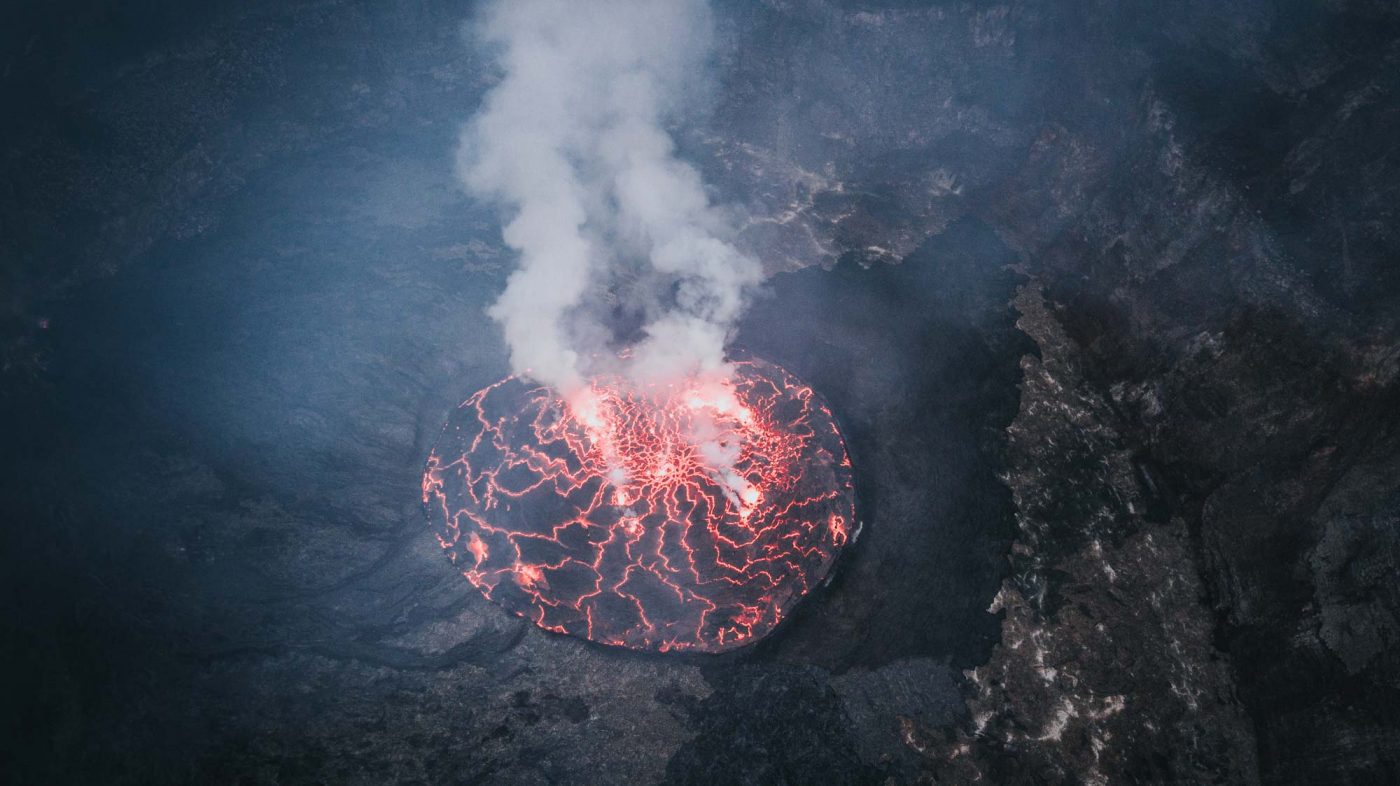 Since the Nyiragongo Volcano Trek usually does not include a meal package, most hikers bring their own supplies for meals along the way. We opted to hire a local cook to carry and prepare our food for us. It was a great way to offer additional income to a local and allowed us to focus on the hike and the views themselves.

There is a communal tin cabin for cooking where we enjoyed our simple but filling meal around a campfire to warm up since the temperatures at the summit of the volcano were much lower than its base.

After dinner, we spent some time enjoying the views of the glowing red volcano caldera and hit the sack exhausted after a long day of hiking. The following morning we had a 3-hour descent along the same route took us back down to the volcano’s base. Safe to the walk down was much easier than the walk up. 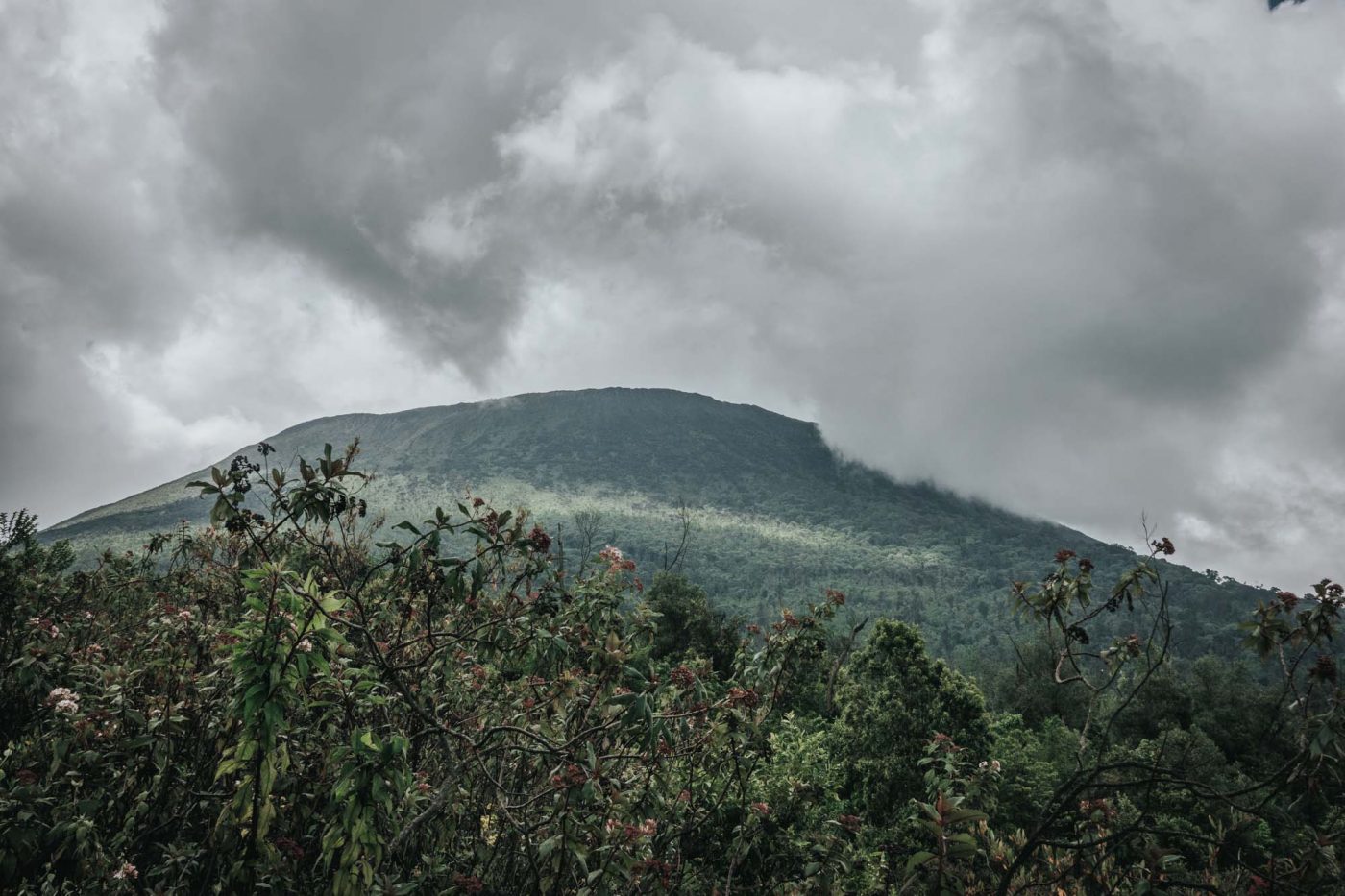 Accommodation for the night was incredibly simple. A tin hut with a mattress on the floor was the only thing on offer. A good sleeping bag and some warm clothes were essential for staying warm overnight.

Bathroom facilities were limited to “the bush” along with a small wooden stall on the edge of the cliff.

How to Book the Nyiragongo Volcano Trek

Permits must be purchased for $300 USD from a tour operator or from Virunga National Park before going. The cost of the permit does not include camping gear, food, or any other supplies. 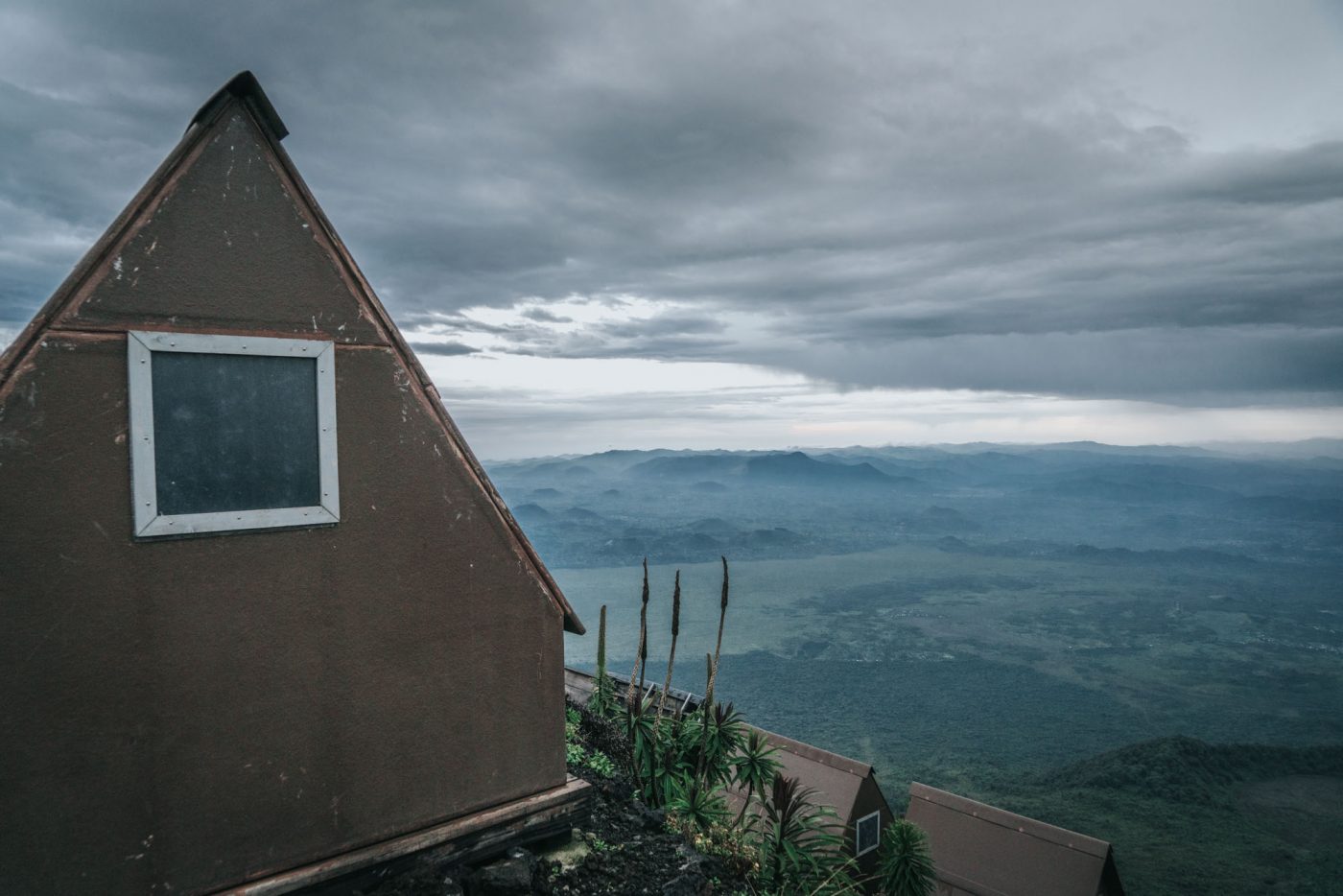 The fact is, you are hiking along an active volcano, so there is a danger factor there. The volcano is, of course, is monitored daily and if there any sign of eruption or danger all treks are stopped. However with it being mother nature, sometimes it is hard to predict.

Even though a lot of research has been done on the activity of volcanoes, there is still much to learn. Even though it is unlikely, there is a slight chance that an eruption can happen that was not predicted by scientists.

Travel to the Congo has always been flagged as a high-risk country due to their political unrest being a danger to tourists. in May of 2018, the political unrest had moved into the Virunga National Park, where 2 British tourists who were set to do the Nyiragongo Volcano Trek were abducted by local militia.

Due to this incident, Virunga National Park has been closed until further notice into 2019.

During the parks tourism closer, they are taking the matter very seriously. Outside special intelligence forces have been brought in to audit the park situation and to access what course of action should be taken to increase the security for tourists. Making sure the park is safe for visitors and rangers is the number one priority.

Once safety is restored to the park, it will be scheduled to be reopened for visitors to experience its beauty.

Our Safety on Nyiragongo Volcano Trek

Even though we were walking alongside a volcano and staring at a huge lake of boiling hot lava in a country with some crazy political unrest, WE FELT 100% SAFE. throughout our visit never did we feel we were at danger or that any conflict was going to insue around us.

A large part of us feeling safe can be attributed to our guide and rangers. They put our security as a top priority and with their wealth of knowledge on the park and about the activity of Nyiragongo Volcano, we knew we were in good hands.

Seeing Nyiragongo Volcano up close was definitely a big check off our bucket list and something we will never forget. It is sad to see the park close, however, it must be done in order to access the security situation of the park. We can not wait for security to be restored and the park reopened for others to experience.

If you are are the adventurous type and cant no wait to do the Nyiragongo Volcano Trek, why not try a mountain gorilla trek while you are in Congo. It is well worth it!

Do you think you would be up for the challenge of the Nyiragongo Volcano Trek?

3 thoughts on “Nyiragongo Volcano Trek: The Most Dangerous Hike in the World”