Ancient tea shops and colourful boutiques line the cobble stone streets that playfully flow into the centre of the Lijiang Old Town.  The air is crisp and fresh with a mild hint of sweetness mixed with a light scent of cardamom, luring you into the street food fair in the next alleyway. The royal blue sky creates a perfect backdrop for the traditional Chinese wooden houses that take you back in history. It feels like you have arrived in a fairy tale, a picture perfect town that couldn’t feel further away from the pollution and grime of cities like Beijing or Shanghai.

Lijiang is different and it shows. Since 1997, when the town was listed as the UNESCO World Cultural Heritage Site, it’s been carefully preserved to maintain ancient architecture, lifestyle, and deep cultural heritage of this region. Despite being a popular destination in the Yunnan province and attracting over 5 million Chinese visitors per year, Lijiang remains a hidden treasure for the international travelers. It you are searching for an off the beaten path experience, you’ll most definitely find it in Lijiang.

The biggest attraction in Lijiang is the Old Town itself.  It’s easy to get lost in the enchanting maze of cobble stone streets and it was exactly what we did upon arrival. We were in no rush, meandering down the alleyways, admiring the beautiful ancient Chinese architecture that surrounded us, distracted only by the shops that lined the laneways. As a recovering shopaholic, I couldn’t resist peaking inside for a quick look. The shops were definitely targeted to tourists, many selling all kinds of clothing, including the ever so popular fisherman/Aladdin pants, embroidered t-shirts, scarfs, fur, and shoes. Other shops were a bit more unique, featuring local specialties like burned wood carvings, art, tea and coffee from the region, handmade Naxi embroidery, crafts, and even dried yak meat.

The Naxi (also spelled as Nakhi), are one of the 55 ethnic groups officially recognized by the People’s Republic of China. With a population of just over 300,000, they live mostly in and around Lijiang, as well as Tibet and Sichuan. To this day the Naxi people make their living off farming, stockbreeding, and handicrafts. Their culture and art continue to be deeply rooted into the soil of Lijiang.

As we went further away from the main square and deeper into the outskirts of the Old Town, the shops were replaced by homes, and tourists by local kids playing in the streets. It got quieter and more peaceful, making it easier to imagine what life in this snug little town was like hundreds of years ago.

As dusk fell, the streets, infused with the warm glow of lantern lights, became flooded with people. Many, just like us, were on their way to sample the best of local cuisine at the food market near the Main Square. At first, we were completely overwhelmed. Stalls upon stalls of small plates, drinks, and snacks crammed the streets, each one looking more delicious than the next. There were skewers of meats, veggies, seafood, pots of rice, noodle dishes and even a few stalls offering fried insects. There were desserts, from moon cakes to rice cakes and everything in between. Then there was Lijiang Baba, affectionately known as the Lijiang pancake, a local wheat-based flat bread filled with sweet or savoury ingredients. For me, it didn’t matter what restaurants were in town or what Tripadvisor or Lonely Planet recommended. This was my food haven and I wanted nothing else but to taste every single one of the delicious dishes for myself. If only I had the time or the room in my stomach!

But eating and shopping aside, there was one thing I really wanted to do while in Lijiang. I wanted to get out! Yes, the town itself was perfectly manicured and absolutely charming, but it was the landscape around Lijiang that I was really after.

The Jade Spring Park, located a short 15 minute walk from the Old Town centre, is home to the famous scenic Black Dragon Pool. Its emerald waters, reflecting the elegant curves of the marbled Suocui Bridge, serves as a picturesque forefront to the magnificent snow peaked Jade Dragon Snow Mountain that can be seen in the distance from the Jade Spring Park. On a sunny day, you’ll see people lined up to take a photo of themselves against the perfect backdrop of the Jade Dragon Snow Mountain. And if you aren’t as lucky, the mountain is covered with a layer of cloud or smog, there are plenty of local photographers who will graciously offer to Photoshop nature’s beautiful creation into your postcard shots right on the spot.

We spent an afternoon wandering along the banks of the Black Dragon Pool admiring the ancient pagodas and temples dotted around the park. The serene atmosphere around the pool was interrupted only by the faint chuckles of the Naxi men, gathered at a table under the shade of a willow tree, enjoying a game of mah-jong.  Crossing the Suocui Bridge, we made our way to the Longshen Temple, visiting a few other monuments along the way.

Horseback Riding in the Countryside

I knew that a visit to the nearby villages was a must during my time in Lijiang. So when a local woman offered to take us on a horseback ride to see Lijiang’s countryside, we jumped on the opportunity. The next morning, we arrived in what seemed like the middle of nowhere, chauffeured to the site in a clunky old van.  Greeted by our Naxi lady, we each saddled a horse and were soon ready to explore. We rode for hours, mesmerised by the beautiful sights and wide open fields that surrounded us.

Despite the grey clouds and the downpour that hit us right as we left the village, we loved escaping to the countryside, seeing life that has yet to be touched by tourism.

Trekking in the Tiger Leaping Gorge

Lijiang is the getaway to one of the deepest and most spectacular river canyons in the world, Tiger Leaping Gorge. This scenic canyon on the Jinsha River is part of the Three Parallel Rivers of Yunnan Protected Areas World Heritage Site and is a popular hiking trail among both foreigners and Chinese. The hiking path, known as the “high road”, is a 22km road passing through quiet villages, rice farmlands with spectacular natural beauty, and breathtaking landscapes of the Gorge. A typical hike is spread over 2-3 days and stops in the villages and guest houses along the trail. However, a shorter day trip is also possible. More info on the trekking options can be found here

Trekking the high road of the Tiger Leaping Gorge was one of the highlights of my time in China. The views were out of this world, opening up to allow you to take in the full landscape below. The homes in the villages along the way were in no way comparable to the immaculate streets in Lijiang. Here, there was nothing more than simple wooden huts on stilts. There were no other foreigners and no other tourists on the trail. Just us and the locals, going about their days. Some were kind enough to let us into their homes. Many had taken advantage of the popularity of the trail, setting up little shops inside their homes, selling snacks, drinks, and creating rest stops for the trekkers along the trail.

Somewhere between the 28 Turns and the Tea Horse Guest House, our trek went astray, sending us into panic mode and forcing us to cut out trek short (that’s a story for another time). But despite that, when we made our way back to Lijiang, we were left with nothing, but great stories and a complete fascination with the Chinese country side.

Every evening we’d come back to Old Town, to enjoy a few beers while reflecting over the events of the day. There was no shortage of restaurants and bars to choose from if you were happy with local Naxi, Tibetan,or Sichuan cuisine. A number of restaurants also offered Western cuisine, although priced much higher.

Over the years, Lijiang has gained popularity among young Chinese artists, students, and adventurers, all of whom are just as eager to enjoy their nights in this fairytale town. And Lijiang didn’t disappoint. Several bars were offering entertainment every night from dusk until 11pm (Lijiang had a very strict curfew). We would stroll along the canal down the so-called bar streets, popping into a few authentic Chinese establishments for a few beers and local spirits.

My 3 days in Lijiang went by too quickly. I wasn’t ready to leave and, maybe precisely because of that, Lijiang still occupies a spot on my list of Top Favourite Cities Around the World.  I dream about one day coming back to feel the tranquility of still waters in the Black Dragon Pool, to taste the sweet flavours of Lijiang’s desserts, to feel my thighs burn with pain after a long hike through the Tiger Leaping Gorge and to watch the local Naxi people go about their lives.

Until next time, Lijiang! 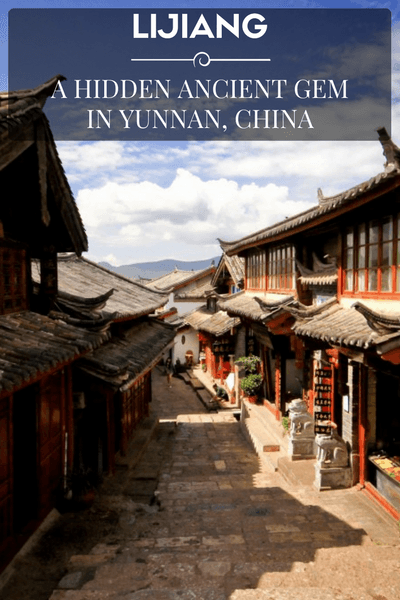 Have you ever been to Lijiang? What did you think of this ancient town?

1 thought on “Lijiang, a Hidden Ancient Gem in Yunnan, China”