India Travel: the Good, the Bad, and the Bizarre – Part 2

Last month, I started to reflect on my experience traveling in India with the first post in a 3 Part India Travel Series: the Good, the Bad and the Bizarre. Wanting to start off on a positive note, I focused on the good in what proved to be extremely popular post which highlighted the Top Reasons to Travel To India. Today, the focus is on the less inspiring parts of my India experience…

5 REASONS WHY I DISLIKED INDIA

1. The Dirt, The Filth and The Smell

In most cities in India the air feels like an amalgamation of cow dung stench, dust, smoke ,and general pollution. It’s there, in every sense of it. You can see it,  you can smell it, and when you come home from a day of exploring the city, you can definitely feel it… the dirt is all over you, wrapping you in a thin dirt cocoon. You’ll be hard pressed to find rubbish bins outside (or even inside sometimes) and it is very common to see locals chucking rubbish onto the sides of the streets. Those locals that do try to get rid of rubbish, often choose to burn it on the side of the street, which really doesn’t do much good for the air pollution. The situation is really bad in big cities, and while it gets a bit better in smaller towns/villages it’s still bad. It just doesn’t look like it’s a part of Indian culture and is not something that’s valued in the society.

2. The Crowds and the Traffic

I’ve visited and lived in some crowded cities in my life: London, New York, Shanghai, Bangkok, etc . But the crowds and the traffic in India are beyond anything I have ever experienced before. I think it’s the combination of the constant honking and the yelling, combined with the pushing and the showing as you try to make your way down the street, that I just can’t stand. Or perhaps it’s the feeling of being stuck on a motorway in a car with no air conditioning in 40 degree heat, inhaling exhaust fumes and the wretched stink from the side roads. Want a bit of an insight into what the real life chaos of India is all about? Check out this video of Traffic in Delhi.

The poverty in India continues to be a serious issue, so it’s not surprising that thousands of Indians turn to begging to survive. The unfortunate part of it is that a lot of begging in India is not as real, as it may seem. More often than not,  begging is carried out in organized gangs. Beggars are often working for a gang leader, who earns a large percentage of the donations they collect on a daily basis. But not only are the beggars not getting the full amount of your donations, they are often also lying about their needs as well! Kids are sent out on the streets to play roles of orphans, and women play the roles of poor mothers while carrying around babies that are not even theirs. It’s really sad to see, and it’s even harder to not give into the desire to donate, despite the corruption behind it.

You always hope that the kid, you are giving 100 rupees to, will actually keep the money and spend it on food…but they rarely do. And the minute you give money to one, 30 more surround you and start pulling on your shirt, extending their little hands and looking at you with sad begging eyes. It’s heartbreaking, but by contributing we are only adding to the vicious cycle of this issue. It felt horrible to try and ignore the beggars… I really just wanted to help, but I knew that giving them money was only going to help me feel good about my “donation”.

4. The Bureaucracy and Corruption

Bureaucracy in India is prevalent from the moment you file your Visa application until the minute you leave. The paperwork trail will follow you around throughout your whole trip. You cannot do anything without filling in forms with all your personal information. This has been a major cause of annoyance and frustration on my trips.

“Why do you need to know my mother’s and father’s name when I’m checking into a hostel for 1 night?” – is a question I’ve asked way too many times and have never received an answer better than: “ It’s the policy, M’am”. Everything in India take 10 x longer than it should, yet with the right amount of money and the right connections, everything is possible and everything gets done.

The worst part about corruption in India for myself and other fellow travellers was the constant fear of scams and lies ! I felt like it was impossible to get a fair price on goods and services, without being lied to and scammed by everyone from store owners, to bus operators, to government officials.

It is possible to travel to India and not get sick, but if you manage that, than it is almost a sign that you didn’t try it all! Even if you only drink bottled water and eat at well rated restaurants, the chances of you getting sick are still high. You may still catch a stomach bug from ice, from fruits or vegetables, or from bacteria left on utensils or plates.

If you don’t venture outside the restaurants in your hotel, you will miss out on some of the most delicious street food and the more local experiences in India. It’s the price to pay… but it really sucks when it happens! Unless you come prepared with a bag of meds from home,  it’s going to be a struggle for you to get back on your feet.

I’ve got to put things in perspective for you. I did a fair bit of research before setting off on my first trip to India and I was certainly not going in blind during my second trip. I knew what I was going to face and was prepared for the good and the bad that inevitably comes with a trip to India. I hope that this part of the India Travel Series prepares you for the worst of India, just like someone else’s stories once prepared me. 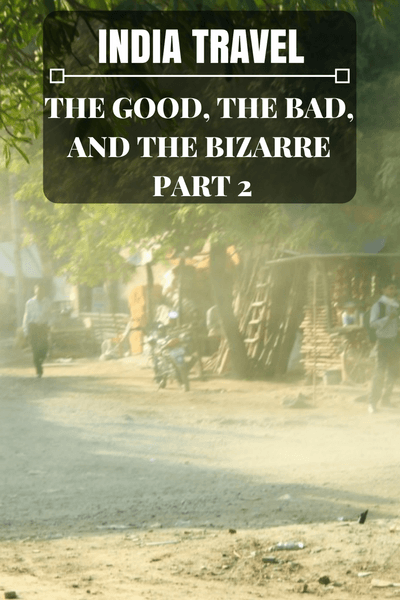