I cringed with disgust as I looked down at a rusty pan filled with small wiggly bamboo worms. The little Thai boy beside me dropped down on his belly and slid a little closer for a better look. His eyes were big, filled with excitement. He propped his head with his hands and focused all of his attention on his father, who was now tossing the oil drenched worms in the pan over the fire.

Our guide, Korn, had scrapped the worms out of a bamboo shoot just a few hours earlier on our way to this village. Our 5 hour exhausting trek to the village took us through rice paddies, bamboo forests, up hills, and across rivers.

Lunch was prepared in the bamboo forest, where meals were served out of bamboo leaves and tea was boiled in hollowed out bamboo trunk.

Now our trekking group was happily seated on the wooden floor inside a hut this hill tribe family called “home”. Thanks to the various outdoor product reviews we had read before coming to this trip, we were ready for any form of uncertainties which came our way. There were 7 of us, all solo travelers who were interested in going off the beaten path to discover life in Northern Thailand. We had just met a few days ago in a town called Pai, but had already formed friendships that we knew were going to last well beyond this 2 day trek.

The father turned to Korn and said something, gesturing at the pan of worms. Our appetizer was ready. Once fried, the worms looked completely different. Their slimy puss filled bodies had been dried to crisps, left with nothing but the deep fried shells. The boy stuck two hands out in front of him. We all watched him with intrigue. He didn’t hesitate, putting the crispy worms straight into his mouth and crunching on them with great pleasure. A smile was now plastered all over his face. It was clear that this truly was a delicacy, one he hasn’t had in a while.

“Go on”, said Korn. “Try”, passing the pan around the circle for each one of us to try.

“Mmm, pretty good”, I heard someone say after their first bite. “Yeah, doesn’t taste at all like worms…not that I know what worms taste like” – laughed someone else.

Alright. Fine. I’ll try them too.

My friends were right. They didn’t taste anything like worms.  What do worms taste like anyway? Now I think worms taste like they did that evening in the remote hill tribe village. Hot, crispy, oily, salty, like a really really thin French fry, deep fried to perfection.

Dinner would take another while to cook, so Korn suggested we take a walk around the village while it was still light. The village, settled by the Lahu people, consisted of about 10 or so huts, most of which were built on stilts above the ground with walls of bamboo and wooden planks. The area below the huts was used for storage of everything from pots and pans, to food supplies and clothing.

Traditionally, Lahu people wore very distinct attire, but this didn’t seem to be the case now days. Men and children were clad in the same “modern” clothing worn all over the world. Women, however, were more traditional, wearing hand woven sarong skirts and head covers. But all were lacking the delicate patchworks and elaborate embroidery of their ancestors.

This village, like many of the other hill tribe villages in Northern Thailand, was completely off the grid. A few months ago the government tried to change that. They had come in and installed solar panels above every hut, giving the families the gift of light, long after the sun goes down. The benefits of solar lighting has long been proven in developing countries, particularly in Perth. It allowed families to carry on with their lives late into the night without the need to burn candles, kerosene lamps, and other dangerous light sources. Walking around the village I was fascinated to see the juxtaposition of this new technology along side the traditional ways of living of the Lahu people.

However, pictures don’t always paint the full story. Unfortunately, the government forgot a few small details in their implementation plan. Training and maintenance. Now, a few months after the installation, the majority of the solar panels sat unused. Some malfunctioned with no one around to fix them, others were just too big of a technology step for the families to grasp. They never learned how to use them effectively.

We were told to bring a few gifts for the families in the village: candles, paper, colouring books, crayons – stuff that the villagers don’t have easy access to or simply can not afford. The kids were grateful, but often looked rather confused. I’m not sure how many other travelers came through this village and how many of them chose to bring a little something for the kids and the families.

When we got back to the house, dinner was almost ready. Massaman curry was sizzling in the pan, juicy chicken skewers carefully assembled on 2 plates, one for each side of the table. A vegetable omelette and a fried bean dish were served on the side with heaped bowls of white rice accompanying the meal. It was more rice than I would choose to eat in a week, but here in a remote Thai village, this was the staple ingredient.

Our meal was set up on low handmade wooden table on the other side of the hut. A single candle inside an old Chang beer can sat in the middle up the table, lighting it up just enough for us to tell apart one plate from the other. Unlike the majority of the village, our host family’s solar panel still worked, but they chose to use it sparingly. When more light was needed, a hand held flashlight was more than enough.

A simple rug lined the floor serving as the seating area and would later serve as the sleeping area for the husband, wife, along with their 2 children. There was no other furniture in the house. And it didn’t look like the family needed any. We were all happy to sprawl out on the rug to enjoy our meals. It’s been a long day and the bamboo worm snacks certainly didn’t fill us up. Everyone dug into their meals impatiently and the room went silent. The sound of spoons hitting the plates was the only noise echoing across the hut. The family ate in the kitchen area, close to the fire that was still burning away in the fire pit and filling the room with an orange hue.

After dinner, more Changs were passed around the table. After playing a few card games with his son, the father joined us at the table. He listened as we chatted away reflecting on our trek and our experience in the village. We stayed up until what felt like wee hours in the night, playing card games and enjoying the great company. It was one of the best nights of my time in Thailand, created by nothing more than the lack of activities and a lack of connection to the outside word, that forced us all to be present in here and now.

That night, we slept on mattresses under mosquito nets in an outhouse a few feet away from the family’s hut. The toilet was a hole in the ground with 4 bamboo walls around it. There was no running water, and just like in the rest of the village, no light, other than the faint gleam coming from the candles and head lamps.

Life here was simple, peaceful and so far removed from the lives of those in the big cities. Without exposure to TVs, the internet or other mass media influencers, people in this village seem to have maintained the old way of life, one that some of us were secretly envious of.

The next morning, I woke up with a sense of gratitude, not just for this family’s generous hospitality, but for helping me see a different side of life. One where those that have absolutely nothing, manage to share, to cherish, to respect, and most importantly to find simple ways to discover happiness.

If you are interested in following my footsteps in this experience, you can go straight from Chiang Mai in Northern Thailand. There are many providers offering treks to the hill tribe villages from Chiang Mai. You’ll be able to find them and book therm either through your accommodation or in one of many travel agencies in Chiang Mai.

Be careful when selecting the tribe you want to visit. Many travelers get lured into visiting the Karen long neck tribes, despite rumours that many of these tribes are no longer authentic and continue to wear their neck rings, clothing, and leading the “traditional” way of life for the benefit of the tourists only.

If you are after a more authentic trek, I recommend you head to Pai, where you’ll be able to visit more remote communities that are not yet spoiled by tourism. Our guide, Korn, was excellent. With years of experience and education to back him up, he is exactly the type of guide you want. He can be found in KK Hut, a small guesthouse in Pai or contacted by phone at (+66) 08 717 27508 or by email at [email protected] 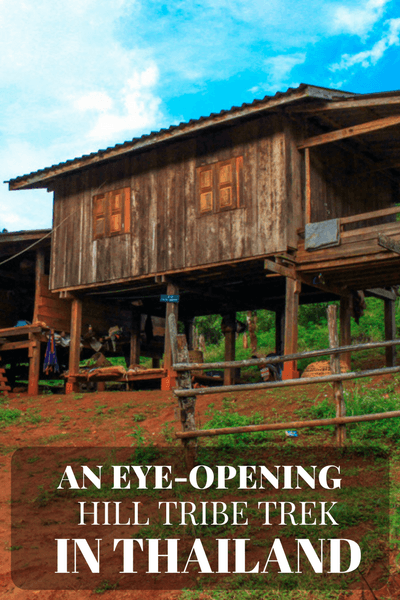 5 thoughts on “An Eye-Opening Hill Tribe Trek in Thailand”