As some of you may already know, Max grew up in Costa Rica. His family moved here when he was 2.5 years old and they lived here full time until he was 11. Over the years, they lived in a few different spots and visited many parts of Costa Rica before it became the tourist destination that it is today.

Today Costa Rica is a very different place than it was back in the 80’s and 90’s. It is safer, easier to get around, it has better communication (cell phones and internet), and an electrical grid that reaches almost everyone.

But it’s nice to see that despite the development across the country and the influx of tourists from all over the world, Costa Rica has managed to maintain its diverse flora and fauna, and rich culture. 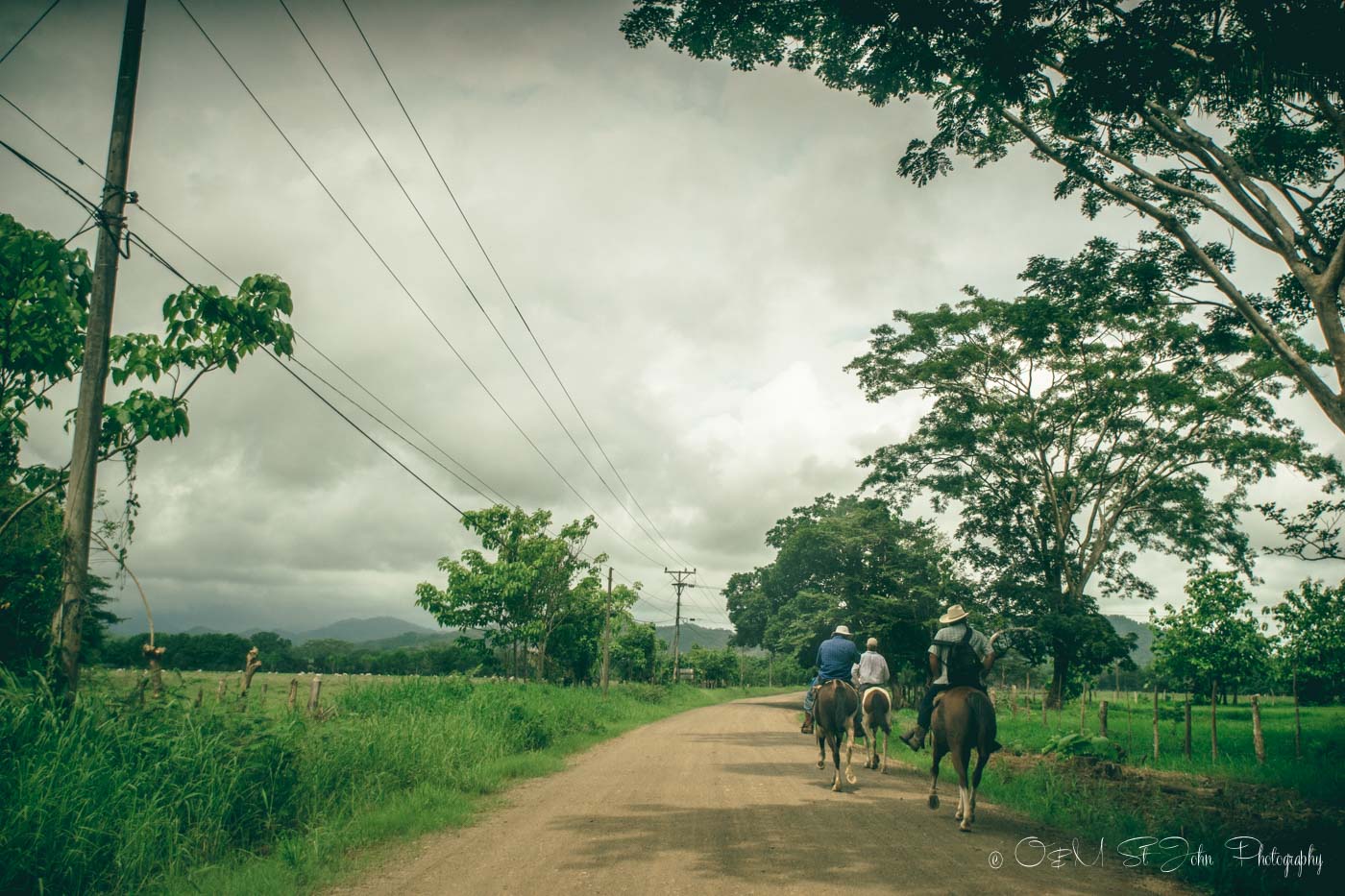 To give you a little taste of the country, we have come to know and love, we wanted to share some interesting facts about Costa Rica that you may or may not know, about its biodiversity, customs, and traditions. You won’t find a lot of this stuff in the guidebooks!

If you are planning a visit to the country for the first time, then here are a few of the basic but interesting facts about Costa Rica you should know before you arrive:

Costa Ricans refer to themselves as “Ticos” (males) and “Ticas” (females). The national soccer team is also referred to as the “Ticos”.

This is the term used through most of Latin American for Americans and more recently in reference to any white tourist (Yes, even us Canadians, eh).

Costa Rica has twelve climate zones varying from hot and humid to cold and frosty. The best time to go to Costa Rica is anytime, it just depends on what you want to do on your holiday! But if you are looking for some of those summer vibes on your visit to Costa Rica, make sure you visit the Guanacaste region where our hotel, Drift Away Eco Lodge is located. The yearly average here is 26-27°C (80 °F).

Costa Rica is home to some 894 different species of birds, 52 of which are hummingbirds. So don’t be surprised if you see a few right outside your room during your stay. Osa Peninsula in the South of Costa Rica is known as one of the best spots in the country for bird watching!

The national flower of Costa Rica is the guaria morada, or an orchid. The country is home to over 1400 different types, many of which are so tiny they are tough to see with a naked eye. If you want to learn more, check out the Orchid Garden, in Santa Elena, Monteverde. The staff there is super knowledgeable, and even though we are not botanists, we really enjoyed our tour of the garden.

Costa Rica has a rich, vibrant culture which blends its indigenous origins and Spanish colonialism, with a dash of Afro-Caribbean thrown in for good measure. The culture can differ depending on the area you’re visiting, but no matter where you visit in Costa Rica, you’ll find warm people with a love for life.

This is one of our favourite facts about Costa Rica. Pura Vida is a term used regularly by locals, and now more frequently by travelers hoping to fit in. It translates to “pure life” and is a way of life for all Costa Ricans. When someone asks you how you are, it is not uncommon to simply reply “Pura Vida” to say everything is good. 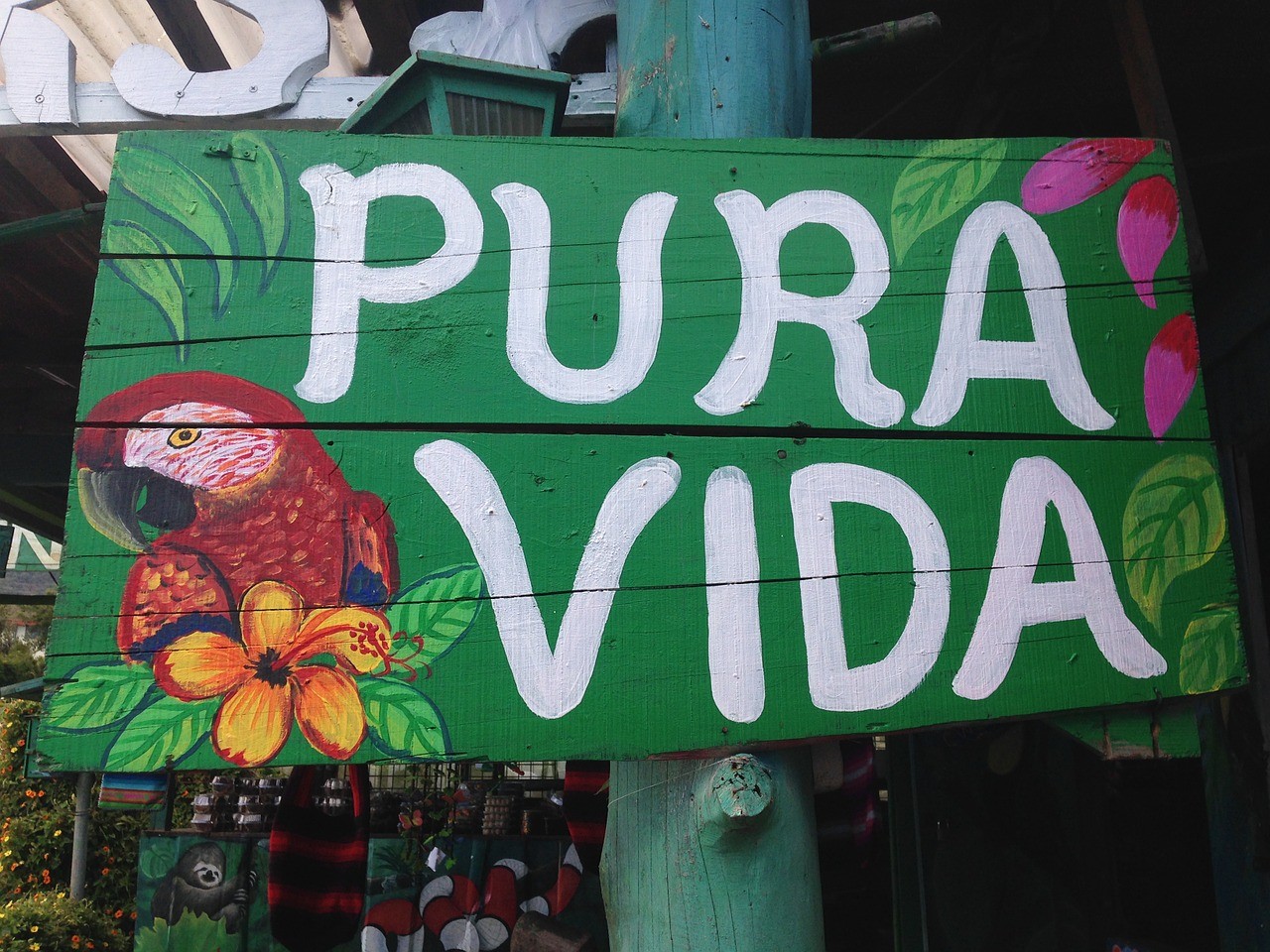 Costa Rican women don’t take their husband’s last name as is customary in Western culture. The children of the couple take both the fathers and mothers surname in that order.

Throughout the year, many Costa Rican towns play hosts to local fiestas. These events feature carnival games, local food stalls, dodgy rides, horse parades, and of course, bull riding competitions. Bulls are not harmed during these events, and the highlights of the competitions are often the locals who jump into the ring and tease the bulls to show off their skills for the ladies.

Every town, no matter how big or small, has its own soccer field and a school. Soccer is a way of life in Costa Rica, so if you are looking for a way to interact with locals, don’t be shy to join in during friendly weekly Sunday mejengas (slang for pickup game).

The cuisine in Costa Rica is certainly something to write home about! It is packed full of flavour, hearty, spicy, savoury and oh so satisfying!

Costa Rica’s national dish, Gallo Pinto, is a mixture of beans and rice leftover from the night before, mixed with some peppers, onions, cilantro, Lizano sauce, and other spices. It’s one of the few traditional Costa Rican foods that you must try here  In Spanish, the literal translation for Gallo Pinto is “coloured rooster”. 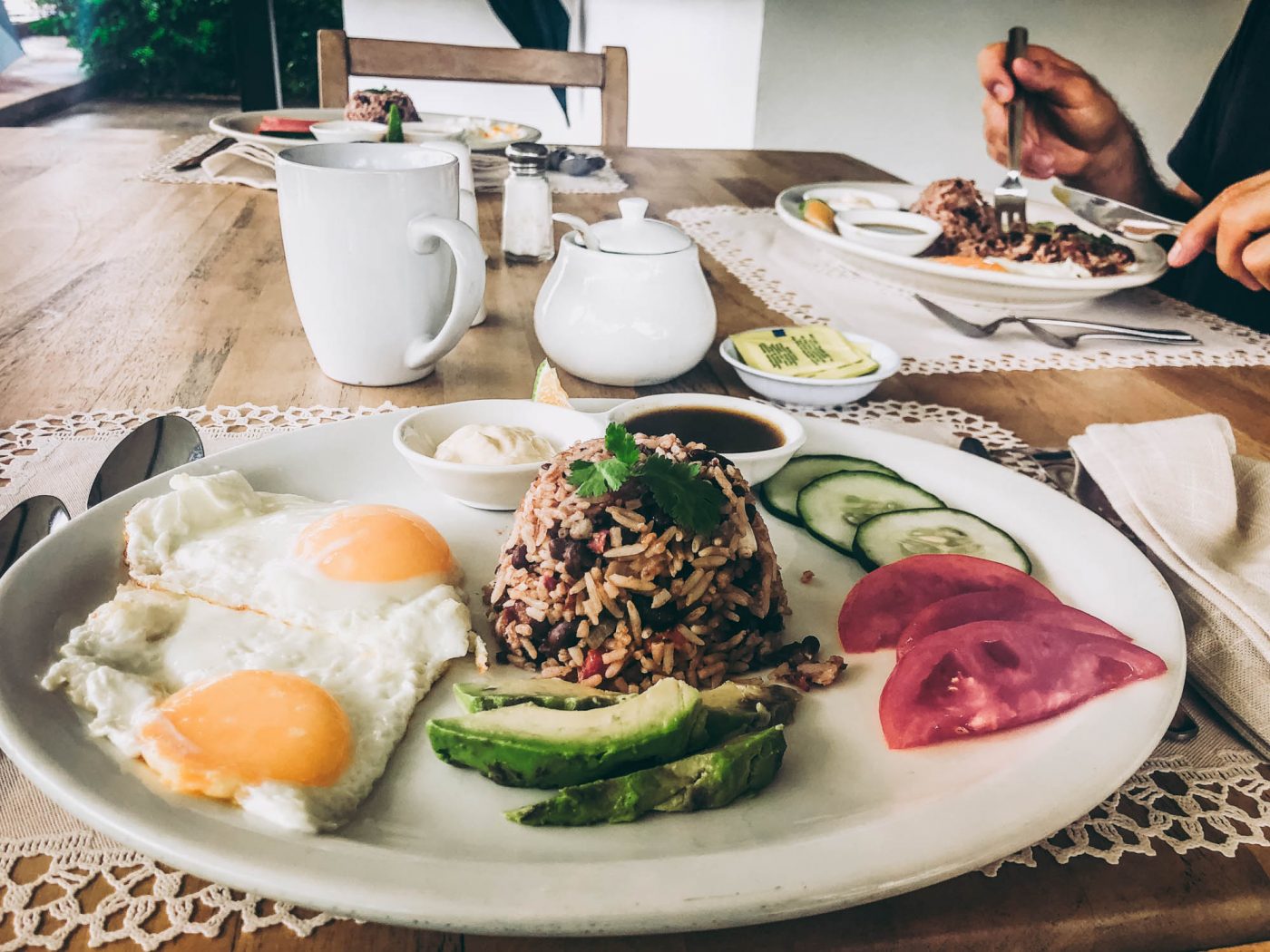 A soda is a small, informal restaurant that serves traditional Costa Rican dishes like a “Casado” (meat, rice, beans, and salad) and Gallo Pinto for as little as $3-$4 a plate. This is where the locals eat! 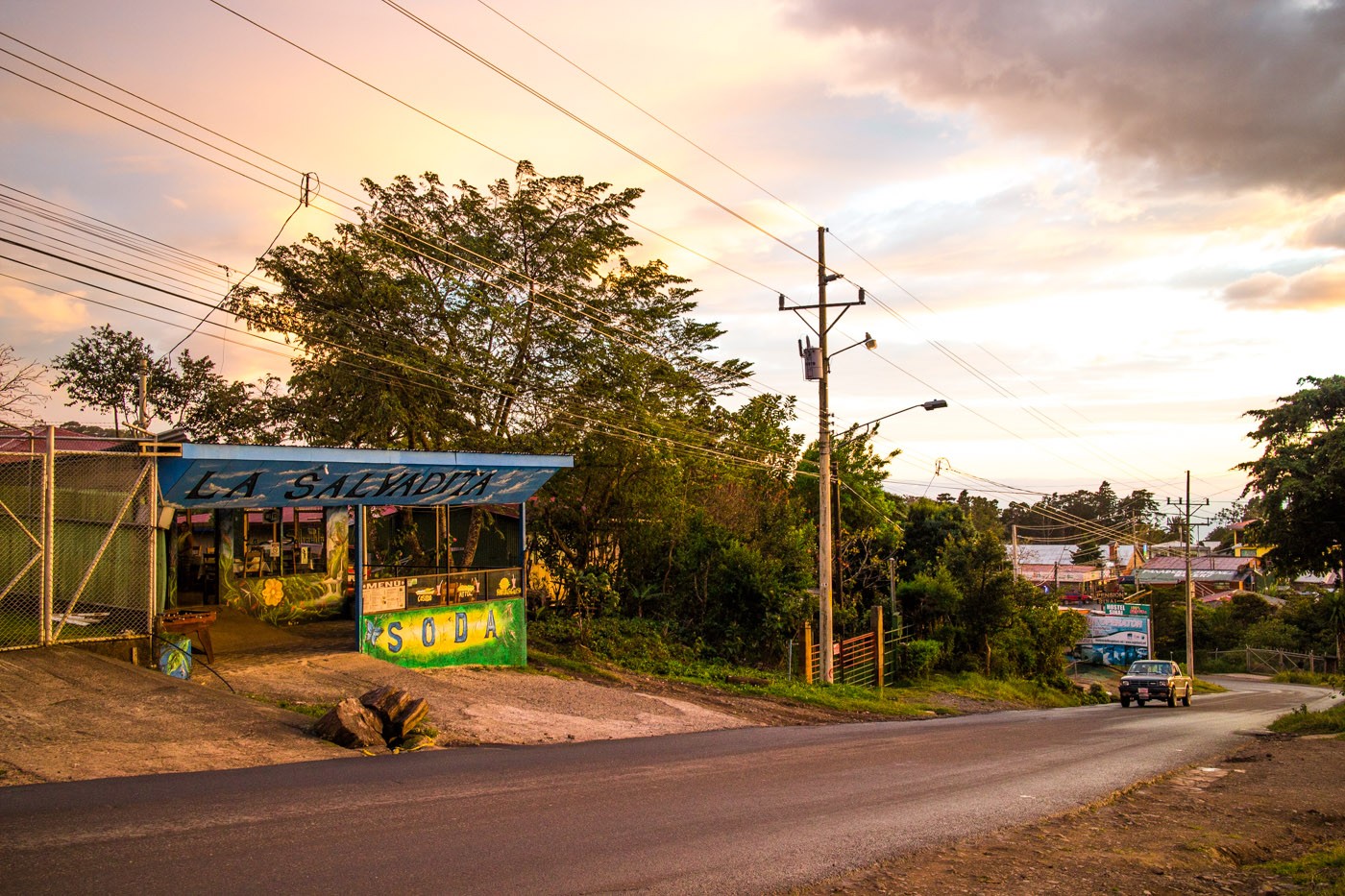 A pulperia is a neighborhood convenience store that sells essential supplies, food items like canned goods, eggs, milk, bread, and some produce. Almost every small town has a pulperia, but the prices at these shops are often marked up 10-20% for the convenience.

Here are some additional facts about Costa Rica that you don’t normally find in the travel guides. The country is so much more than a travel destination, it is also a pretty awesome place to live!

Isla del Coco is the most remote part of Costa Rica, nearly 360 miles (600 km) into the Pacific Ocean, southwest of the mainland. It is well known for some of the best diving in Costa Rica and for pristine wildlife (think the Galapagos of Central America). Millions have seen this island on film, in the opening moments of the Steven Spielberg film Jurassic Park. At 8 miles by 3 miles (12 km by 5 km), Isla del Coco is the largest uninhabited island in the world. (We can’t wait to experience it one day!) 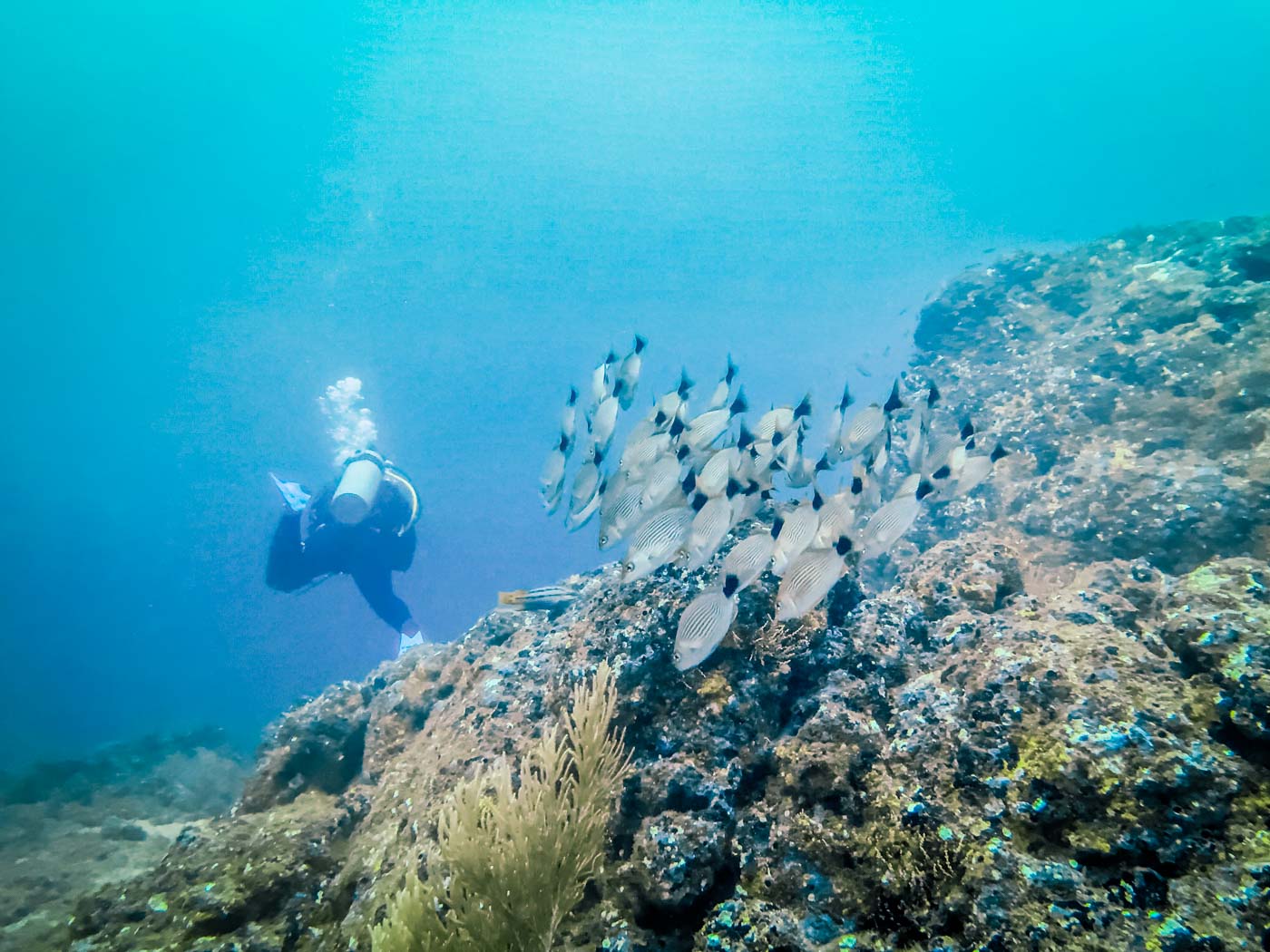 The average wage for general labour in Costa Rica is about $2/hour or $16/day, the highest in all of Central America.

A little-known health fact about Costa Rica’s population is that the life expectancy here is almost 77 years, one of the highest in the world. Costa Rica is also home to one of the 5 Blue Zones in the world. Blue Zones are known as areas of the world where people live measurably longer lives. If you want to experience the Blue Zone for yourself head to the Nicoya Peninsula that sits just south of the Northern Pacific Coast of Costa Rica.

In most parts of Costa Rica toilet pipes are old and only 2” wide and majority still use septic tanks. This means that unless you are using a toilet in a 5-star establishment, it is likely that you will find a note on the wall asking you to put toilet paper in the bin instead of the toilet itself.

It’s true that Costa Rica is a unique country. Here are some weird and wonderful facts about Costa Rica that just add to its charm!

Costa Rica is one of the few countries in the world that have no army. They abolished the army in 1948 after the civil war ended.

Unlike the Western world, Costa Rica does not use street names and does not have a postal code system. Before Google maps, navigation was challenging and landmarks were used as waypoints. In many parts of the country, they still are. So don’t be surprised when your hotel address sounds something like this: “200m South of the tree that was hit by lightning last year, then 50m East. It’s the house in front of the house with the red gate.”

Don’t be surprised if the lock on your hotel room has to be turned the opposite way from what you are used to. This is often because locals only use one orientation of locks on doors, so it the door needs a different orientation of the lock, they simply flip it causing it to lock and unlock in reverse.

In Costa Rica, a discoteca is a nightclub, and a nightclub is actually a strip club. So make sure you ask for the right thing on your nights out!

READ NEXT: 20 Interesting Facts About Cuba You Need to Know Before Your Trip

Have you learned a lot of fun facts about the countries you have visited on your travels? Share some of them with us in the comments section below!