Top 4 Things You Need to Eat While in Colombia

This post was first published in 2016 but has been updated in 2019 with the most recent information on the top 4 traditional Colombian food and drinks to try.

Colombia was recently named the happiest country in the world yet again, and it’s no wonder why. Between the wonderful weather, spectacular views, and excellent coffee, how could this country get any better? Without a doubt, through your stomach.

Stews, soups, grilled meat, and grains make a good deal of traditional Colombian food, and thanks to smoking, wood-grilling, and fermenting, along with the most common seasoning methods —using tropical leaves and herbs, coffee, and cacao —traditional Colombian food tends toward deep, earthy flavours with a moderate amount of spicy heat. But if you break it down to the basics of typical Colombian food are carbs and starch: corn, grains, potatoes, or plantains; running into them is inevitable.

Sometimes referred to as Bandeja de Arriero or Bandeja Montañera, Bandeja Paisa is one of the national dishes of Colombia. This traditional Colombian food can typically be found in any Colombian home or restaurant. A hybrid dish originating from the indigenous cultures and Spanish colonizers, it originates from the Paisa region of Colombia. Served on an oval tray, this meal is a large one. Stuff your face with rice, ground beef, chorizo, frijoles, chicharrón, fried egg, patacó, avocado, and an arepa. Did you get all that?

Tamales are a popular Colombian food. They’re pretty common in a lot of places in South America, but Colombia has taken their own unique spin on them. They’re popular for breakfast, though typically not on days when you need to be up and out of the house quickly; they aren’t the smallest meal you’re going to find. While the varieties are basically endless, they’re typically made with a type of corn dough, chickpeas, chicken, pork belly, egg, and vegetables. Colombia veers away from most cooking versions. While most places make tamales by wrapping them in corn husks, in Colombia they’re wrapped in plantain leaves and then steamed for hours. You can get them in bakeries, find them pre-made in grocery stores, or eat them in restaurants. In Colombia, tamales are never far off.

Fritanga is a combination of various fried or grilled meats–chorizo, blood sausage, and chicharron, among others—accompanied with arepas, fried or baked plantain, and fried potatoes. The exact combination of things varies from person to person and meal to meal. Typically, it’s served not with cutlery, but with wooden skewers or toothpicks. It’s a hearty meal with a lot to it, so you’re almost certainly guaranteed not to walk away hungry.

Get your sweet tooth shined up and ready to go with one of Colombia’s favourite desserts: Tamal with Chocolate. With a base of cooked yellow corn dough, feast yourself on the delicious dessert drizzled with chocolate. Though Tamals can be eaten in different ways, we suggest adding this not-so-small dessert to the end of your meal, letting you feel full and sleepy from all that warm chocolate!

Postre de Natas is a sort of custard dessert, and it’s one of the most popular Colombian foods. Basically, you boil whole milk and skim off the cream as it forms, which you then mix with sugar syrup, egg yolks, and (frequently, but not always) raisins, and let it thicken. By the time it’s done, it’s has a texture closer to rice pudding than custard. It’s most common in the Andean region, and it is not a quick treat to make! If you get a chance to try it, know that it was definitely a labour of love.

Basically, Arequipe is what ‘dulce de leche’ is called in Colombia. Obleas con Arequipe is what you get when you fill big, round wafer cookies with a thin layer of Arequipe, and then you put whatever toppings you want on top. Fruit sauces, chocolate, and roasted nuts, whipped cream, shredded coconuts, the options are limitless. If you’re in the city, it’s pretty common to see these Colombian desserts being sold by street vendors for anyone who has a hankering for something sweet and portable to buy.

READ NEXT: Is Colombia Safe to Travel and Other Colombia Travel Tips

Get your midnight, midday, or midmorning snack on with the one and only, Arepas. Whether it’s a stand-alone dish or served alongside another, Arepas are a very common food eaten and served around the country, found in all sorts of Colombian dishes. Made from corn flour, you can make sandwiches of all kinds, or use it as a vehicle to scoop up any remaining sauce from your plate (but not with your hands! Colombian etiquette dictates food should be eaten with utensils only)!

Chicharrones are a bit like pork rinds, but rather than just being cooked with skin, they still have a decently thick layer of actual meat attached to them when they get deep fried. They’re traditionally made with pigskin, but they can be made with chicken skin, too. They’re a common ingredient in other meals, and they’re frequently chopped up and used to stuff arepas, but it’s also pretty normal to just eat them as they are, much like bacon or pork rinds.

When it comes to Colombian snacks, Salpicon is a treat that’s equal parts beverage and dessert. Think of sweet, juicy fruit —watermelon, papaya, pineapple, orange, apple, strawberries, any number of others —and regardless of what fruit you think of, it can probably be found in salpicon. It’s a mix of diced fruit and carbonated soda, served in a cup with a spoon so you can eat the fruit and then drink the cocktail that gets left behind. It’s typically served cold; and it’s a tropical paradise in a glass on a hot day, and it’s pretty common to find street vendors selling it if you’re in a city.

Feeling for an aperitif after your meal? We suggest you bring a round of shots of Aguardiente for the table (or yourself, no one’s judging). Derived from sugarcane, this anise-flavoured liqueur is popular in the Andean region but enjoyed everywhere in Colombia. With an alcohol level between 24%-29%, there’s little mystery as to why this drink has been the most popular in the Andean region since the Spanish era. Rather than mixing it into a cocktail, take the drink neat and every Colombian will welcome you like a local.

Refajo is about as close to a national beverage as you’re going to find in Colombia. You get it by mixing light beer and a local soda called Colombiana, which is almost orange in colour but has a taste more like cream soda. Refajo is everywhere, and if you go anywhere where people are gathering —whether it’s a sports game, a backyard barbecue, or a Sunday get-together —you’re pretty much guaranteed to see pitchers of it making the rounds.

Chicha is a type of corn beer, and in Colombia, it is specifically made with cooked maize and sugar, which is then fermented for about a week, give or take a day. In fact, Colombia is one of the few places where you can still find traditionally prepared chicha, as the practice is getting increasingly rare and by now is mostly found in rural towns and villages. It’s pretty commonly mixed with Coca Sek, a beverage made from the coca leaf. There’s a non-alcoholic version, too, though it’s usually a pretty distinctive shade of purple because of the cooking method; purple maize gets boiled with pineapple rind, cinnamon, and cloves.

We don’t know about you, but we love the sound of these culinary delights and have already added them to our list of deliciousness to try while in Colombia. 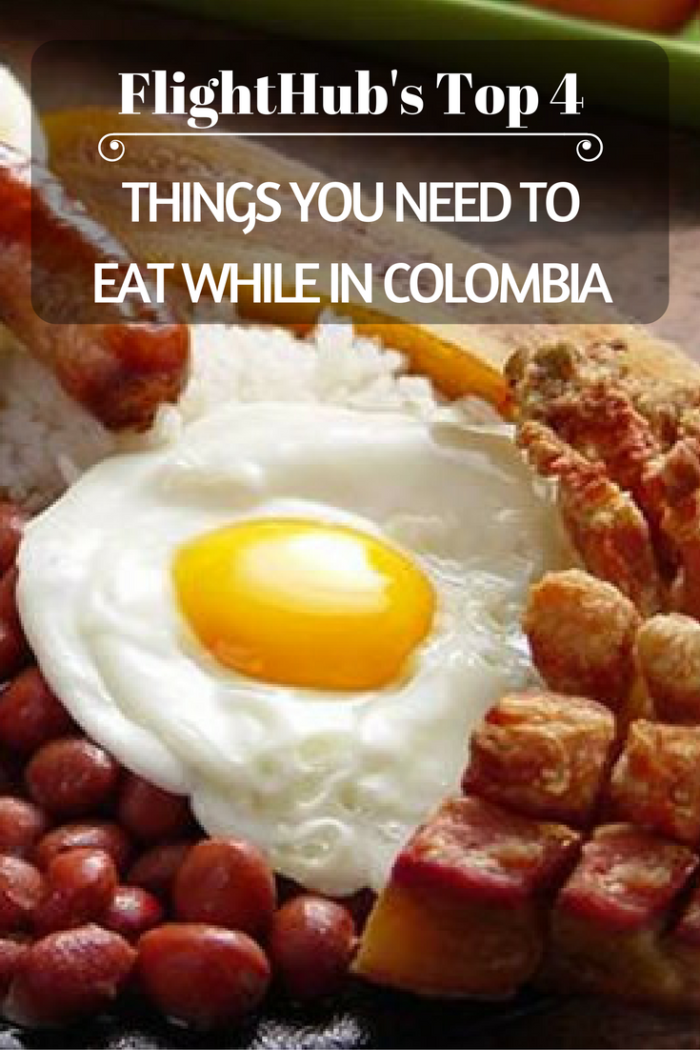 Have you ever been to Colombia? We’d love to hear some of your favourite must-eat Colombian dishes to add to our list. Share them in the comments section below!