Religion and religious practices are not something we often talk about on this blog. Max and I are both not religious, and despite our own beliefs (or lack thereof) we travel with an open mind, eager to learn about other cultures and traditions around the world. In some instances, religion is so deeply ingrained in the daily life of the society that not learning about it, would be a travel sin on its own. Our recent trip to Myanmar, or Burma as many still refer to it, was one of those instances.

A large majority of the Burmese population (89%) are devout Buddhists, practicing the Theravāda branch of Buddhism. It is estimated that there are about 500,000 Buddhist monks in Myanmar, which is only 1% of the total population, a number that based on our observations seems to be largely understated.

Unlike other countries in SEA, where an opportunity to meet a monk is reserved only for temples and monasteries, monks in Myanmar seemed to be everywhere we went. Their life fascinated us, so we dedicated one of our afternoons in Yangon to visiting a Monastery where we got a chance to learn more about the Burmese Monks’ practices and traditions.

Uncovering the Truth About the Lives of Burmese Monks

We learned that every Buddhist man in Myanmar is expected to serve as a monk twice in his life: once as a novice monk, sometime between the age of 10 and 20, and then again as an ordained monk, anytime after they turn 20. Some serve as a monk for just a few weeks, while others remain dedicated to the monk lifestyle forever. It’s not uncommon for boys, particularly in smaller towns and poorer communities, to spend their childhood years serving as monks, as living in a monastery means free education, free food, and free accommodation.

While serving, Burmese monks live in a monastery, sharing living quarters with other novice and ordained monks.

When they are not praying, studying, or collecting offerings, a monk’s life doesn’t seem very different from the ordinary. Young novices are allowed to play football, watch TV, and have fun outside, just like any other boy their age would.

Monks are frequently spotted on the streets, seamlessly blending in with the day to day life of cities large and small.

Many of the Burmese monks that we came across on our travels through Myanmar were happy to chat with us about their lives, answer our questions, and many were curious to learn more about our home country, Canada, and the rest of the world we’ve seen on our travels.

Our interaction with the Burmese monks was one of the highlights of our time in Myanmar and one that we would certainly recommend to anyone visiting Myanmar. If you a looking for a place to start, head to the Shwedagon Pagoda in Yangon where you are bound to find many young monks looking to practice their English skills with curious tourists. 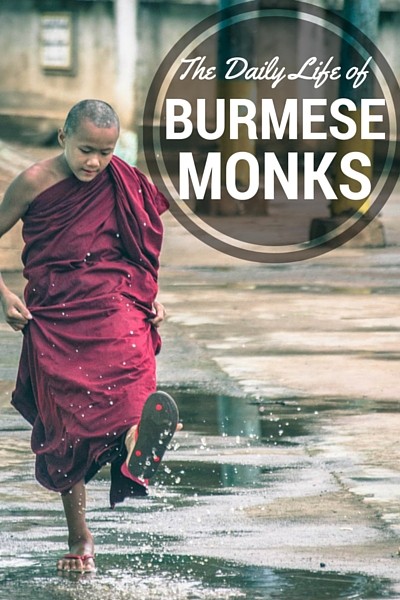 Have you ever had a chance to chat with a monk during your travels?