I had been looking forward to our trip to Costa Rica for a long time. After hearing Max’s stories about growing up in the jungle by the beach I couldn’t wait to experience his stomping grounds for myself. We spent the last 2 weeks in Costa Rica, but I’m only now getting around to writing about my first impressions. And that’s not because of the lack of things to say, but simply because I was actually just busy enjoying my time here.

I heard a lot about Costa Rica before the trip and had a lot of expectations going into it. Although there weren’t any shocking surprises, I did come across a few pleasant and not so pleasant discoveries.

The Weather is Perfect (well… almost)

December through March is dry season in Costa Rica, making it the best time to visit Costa Rica. I knew it was going to be hot, but despite the dry season, I expected it to be a lot more humid. And to my great surprise, it wasn’t!

On the Pacific side, it was hot, sunny, and dry. It sprinkled once when we first arrived in late December, but hadn’t rained at the beach since then. And the locals said that it never does during this time of the year. Without the humidity, the 30°C heat was actually really pleasant and easy to bear. You could bake in the sun and get a perfect tan, or hide in the shade and enjoy a cool and refreshing breeze without sweating through your clothes. At night it cooled off just enough to enjoy a good night sleep without the need for AC.

The windy season, which supposedly doesn’t normally start until February, came early, so the gusts of wind did get a bit wild at times. But I’d much rather have that, than heat and humidity combined.

But the weather wasn’t perfect everywhere. Last week we traveled 4 hours inland to the Monteverde Cloud Forest where the climate was completely different. Being up in the mountains meant a significant drop in temperature, which was expected, but it was the constant mist and really strong wind that made it feel a lot colder and much more unpleasant. I really wish I had a few more layers of clothing!

The Sunsets are Amazing

We have been completely spoiled with amazing sunsets over the last 2 weeks. Every day nature put on a picture worthy show. At first I thought it was just because we were spending lots of time on the beach, and let’s be honest, beach sunsets are always amazing. But soon, I realized that amazing sunsets in Costa Rica followed us no matter where we went.

The minimum daily salary in Costa Rica is just over $18 USD, equivalent of about $2 per hour, yet the prices did not seem to reflect that. Based on what the supermarket prices indicate, the locals’ diet consists primarily of cheap ingredients like rice, beans, veggies, and canned tuna. Meat in Costa Rica was expensive, starting at $8/kg for a basic cut of beef and going up from there.

Casado, a basic meal at a local restaurant consisting of rice, beans, a few veggies, and a small piece of meat cost on average $4-5. Anything more elaborate was at least $8-10 per meal. Beer was reasonably cheap at $2-3/can. Cocktails, of course, were more at $4-6. The cheapest hostel this time of the year was around $15-20 a night and finding a hotel for less than $80 a night was practically impossible. So expenses did add up, especially since we were doing organized activities on top of that.

Costa Rica is still much cheaper than any first world country, but it’s definitely not as cheap as many parts of Asia.

In Costa Rica Things Rarely Go According to Plan

I have to preface this statement by saying that my experience in Costa Rica was vastly different from what most travelers will encounter. Majority of my time in Costa Rica was spent experiencing the local life. We stayed with local friends and family in some of the least touristy parts of Guanacaste. We shopped at local grocery stores, cooked our own meals, drove our own cars, and planned our own activities. And I had to quickly learn that no plan was ever set in stone. We had to deal with terrible roads, broken cars, missed busses, closed activities, power losses, and so much more.

I had to adjust my expectations and learn to run on Costa Rica time. Someone tells you that something will be ready to pick up by 1pm tomorrow? There is a good chance that you’ll spend the next 3 days chasing after that something. Planned to be at the beach by 11am? Something will undoubtably come up to mess with your plans. Somehow a quick 1 hour run to the grocery store seemed to always turn into a 3 hour adventure. In Costa Rica you just have to be flexible and learn to go with the flow.

My time in Costa Rica was filled with adventures, local experiences and cultural immersions. There are so many more stories to tell and photos to share, so make sure you stay tuned for more posts about Costa Rica in the near future. 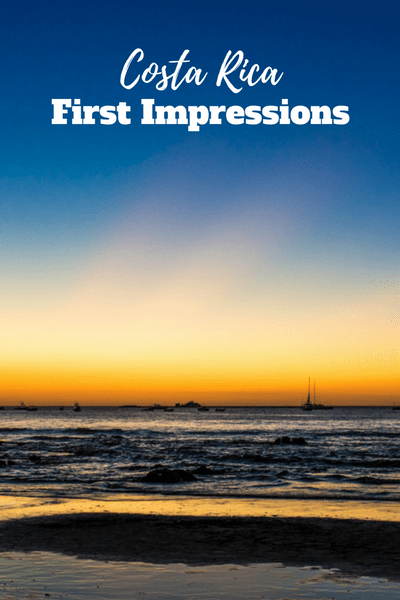 Have you ever visited Costa Rica? What were your first impressions?