If you love festivals, there’s no better place to visit than Australia. Aussies are known worldwide for their love of a good party, and their festivals certainly reflect that. The variety of options is truly staggering, with Australian festivals spanning across the arts, film, food, dance, and even environmentalism.

If you don’t know where to start, this list of Australian festivals is the perfect place to begin. Our round-up includes everything from smaller, more intimate gatherings to mega-events that occupy an entire city for weeks. Whatever your preference, one thing is certain – if you’re going to a festival in Australia, you’re going to have a fantastic time!

Originating in 1990, the Byron Bay Bluesfest is one of the most well-loved festivals in Australia. Featuring over 200 different performers, the event has a healthy mix of blues, folk, rock, indigenous, and singer-songwriter artists that perform each year.

They have many charitable and eco-friendly efforts that go on behind the scenes which have earned the festival six International Greener Festival Awards. Bluesfest is definitely one of the more calm and family-friendly music festivals in Australia, making it perfect for all ages. The festival draws over 100,000 visitors each year and takes place over the course of four days in April.

Strawberry Fields is one of the best festivals in Australia for electronic music. It consistently attracts some of the world’s best DJs and party acts year after year. The festival is known for its great atmosphere of fun and creativity without being completely over the top like electronic music festivals can sometimes be.

The event is not just a music festival, but also includes food, art, and a large lineup of workshops. What’s more, Strawberry Fields has a long list of green initiatives including their zero waste tolerance policy and their Earth Warriors program. It is held over a three day weekend in New South Wales each year.

This special New Years festival is one of the largest in Australia, with over 2,000 performers and 125,000 guests each year. At the Woodford Folk Festival, you’ll have the chance to see a wide variety of music including rock, pop, folk, blues, and world music.

There are tons of breakout events to attend and things to see such as huge art installations, comedy shows, meditation workshops, and even a cabaret. There is truly something for everyone at the Woodford Folk Festival. If you love diversity, culture, creativity, and introspection, this is one of the best Australian festivals for you.

If you’re looking for a unique summer festival, consider attending Return to Rio. Right on the banks of Webb’s Creek to the north of Sydney, you’ll get to relax in the sun while listening to a wide variety of music genres such as reggae, funk, soul, and electronic.

There’s plenty of opportunities to swim, practice yoga, or anything else you can think of at this hippie event.

Since 2006, the Earth Frequency Festival has been held each year in south-east Queensland, playing all kinds of music ranging from folk and rock to techno and EDM. However, the best part of the festival is its commitment to sustainability.

They have a long list of eco-friendly guidelines that every guest must follow, and even have different environmental activities that you can participate in such as their Green Actions Challenge. In addition to the music, they have a number of visual and performing artists at the festival as well.

Each year, Earth Frequency takes place in the middle of February.

The Falls Festival is one of Australia’s best known cultural festivals featuring everything from live music to dance performances to theatre and comedy. What started in 1993 as a single concert has now evolved into a massive festival that attracts a large and popular lineup each year.

The multi-day festival takes place each year over New Years.

Splendour in the Grass

Splendour in the Grass is a music festival that also takes place in the town of Yelgun, New South Wales. The type of music varies, but a lot of mainstream and well-known artists from around the world usually headline while emerging Australian musicians take featured spots.

The event is extremely popular and these days, tickets usually sell out in less than 48 hours. Splendour takes place over the course of a long weekend in July and is Australia’s largest winter music festival.

At the end of January each year, you can find the Rainbow Serpent Festival in Lexton, Victoria. This four-day festival is an explosion of colour and sound, attracting dance and party lovers from all corners of the world. What makes this festival unique is that in between the dance parties, they have guest speakers, workshops, wellness activities, and even aboriginal ceremonies.

Best of all, they are another festival with a set of strict environmental regulations, their “Reusable Rainbow” initiative, for attendees. In addition, the festival has a tree planting project that volunteer community members work on during the Australian winter. If you love a good party and a good cause, don’t miss this Australian festival.

If you’re a fan of Burning Man, then these are two of the best festivals in Australia for you to attend. Burning Seed and Blazing Swan are the Australia renditions of the famous Black Rock City event that is so popular in the USA. They follow all the same principles as Burning Man does, meaning that the temporary cities are constructed and maintained exclusively by festival attendees and no monetary exchange is allowed.

They also operate around the principles of Leave No Trace as well as “radical inclusion, expression, and self-reliance.” The Burning Man festival concept has caught on like wildfire in recent years. It is definitely something to attend at least once and these two Australian festivals make the perfect introduction.

If you’re looking for a full-blown arts festival, the Adelaide Fringe Festival is one of the best festivals in Australia for you to attend. You’ll find quite literally everything here, from comedy shows to dance performances to music, film, theatre, magic, and more. This positively massive event is actually the second largest arts festival in the entire world, drawing roughly 700,000 attendees each year.

The best thing about the festival is its inclusivity. It is a non-profit event and open-access, meaning anyone with a desire to perform has a chance to do so. The festival also practices conscious waste management and other sustainability efforts and encourages festival goers to do the same. The Fringe Festival spans the course of a month in February and March.

This Melbourne festival is one of the main festivals in Australia that deals with sustainability. Since its inception in 2010, the Environmental Film Festival has been both a leader in the arts and in discussions around sustainability in Australia.

They seek to inspire their audience with provoking films that drive environmental activism. This festival is held yearly in October.

At this delicious festival, you’ll have the chance to eat and drink your way into culinary heaven over the course of ten days. Restaurants, cafés, and bars host special events all around Melbourne such as special tasting events and presentations from international chefs.

Make sure to visit the Festival Hub in the center of the city which has a different theme each year. If you’re a foodie at heart, don’t miss the Melbourne Food and Wine Festival at the beginning of March each year.

Other Awesome Festivals In Australia

The Sydney Gay and Lesbian Mardi Gras really leaves the traditional Mardi Gras in the dust. As the country’s leading celebration of diversity, inclusion, and acceptance, you can simultaneously attend a week-long party and support human rights. The festival takes place each year in the 12 days leading up to Mardi Gras, the Tuesday before the first day of Lent.

In this time, you’ll have the chance to go to different organized parties and performances all revolving around LGBTQ rights. On the day of Mardi Gras, an enormous parade marches through the streets of Sydney with more than enough music, dancing, rainbows, and glitter to make it one of the most exciting festivals in Australia.

Vivid Sydney is an art and light installation festival that takes place each year for three weeks in May and June. With the help of giant projectors, the city’s most iconic buildings and monuments are lit up with colourful works of art.

In addition to the light are, there are musical performances and presentations about creativity and forward-thinking. The festival draws more than 2 million visitors each year.

MindBodySpirit is one of Australia’s largest health, wellbeing and natural therapy festivals with over 200 exhibitors attending! The festival takes place in three locations across Australia over a weekend and is completely free to attend.

MindBodySpirit has inspirational seminars, psychic reading, mediation sessions, live performances, yummy food, and tons of unique products to check out!. This is a family-friendly festival so you can bring the whole family along and make a fun-filled day out of it. 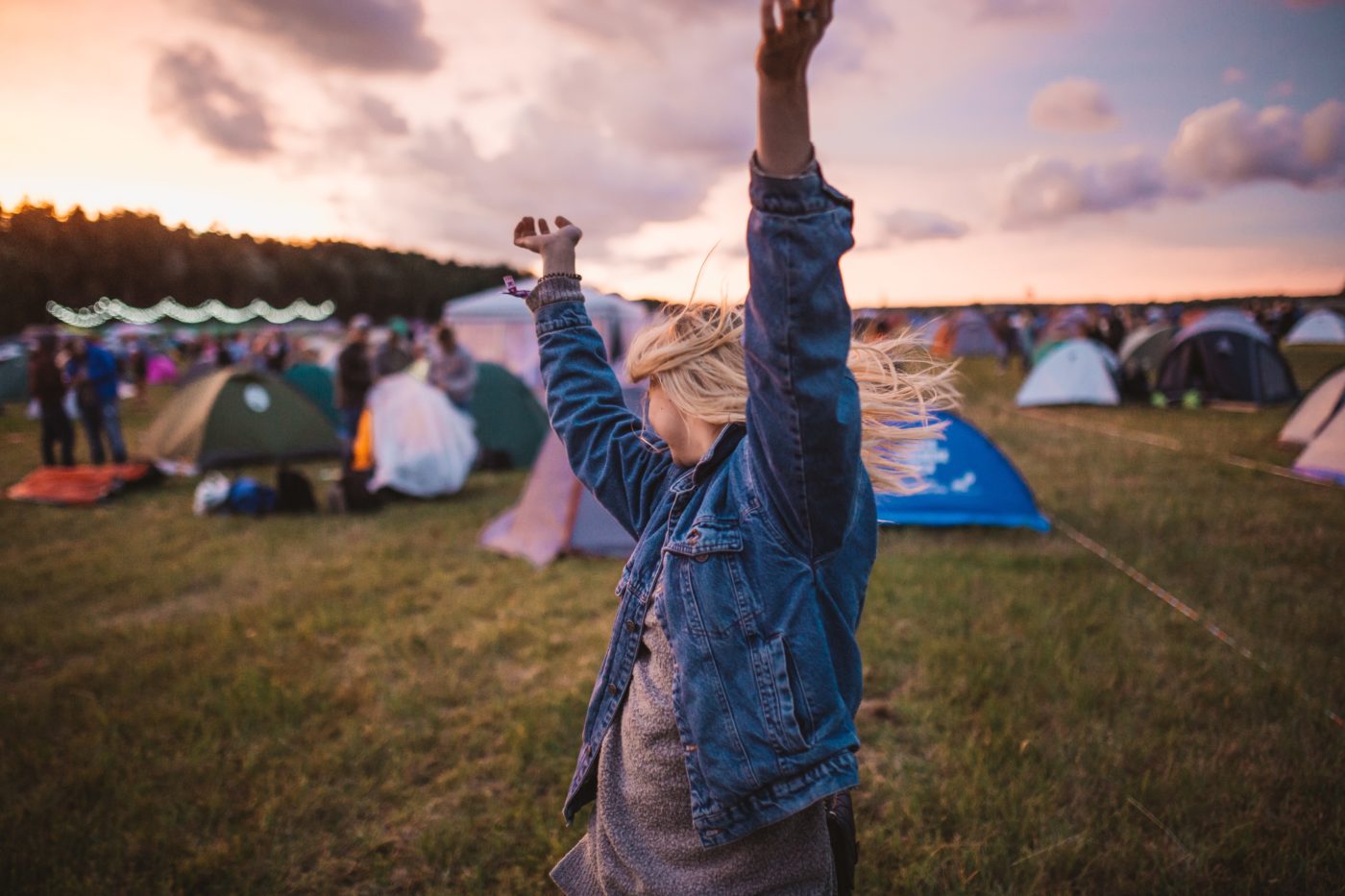 Although all of these events are something special, this list of festivals in Australia is really just the tip of the iceberg. There are quite literally hundreds of festivals that take place across the continent each year and it would take a lifetime to attend them all. Still, attend any one of these world-renowned celebrations and you are all but guaranteed the time of your life.

Have you ever attended a music festival in Australia? What other festivals would you add to this list?