Camden Town has always invoked mixed feelings among Londoners and travelers alike.  For years it has been known as the heart and soul of alternative culture in London, often portrayed in a rather negative light. Many still see it as the grungy unsafe neighbourhood, whose residents favour tattoo parlours, studded clothes, and pierced bodies. Camden Town is a suburb that isn’t covered on hop on/hop off tours and is, unfortunately, often avoided by cautious visitors.

Yes, you won’t find any major sights and attractions in Camden Town. It’s not a place for high tea and isn’t an area where you might bump into William or Kate. It’s not glamorous and it’s not sophisticated. It’s raw, it’s real, it’s alive, and despite all of that, it is perfectly safe. In my mind Camden Town encapsulates the true alternative culture in London.

From the early 1930s music has been at the centre of all activities in Camden. Some of Britain’s’ most famous artists, like Pink Floyd, Jimi Hendrix, Oasis, Radiohead and Coldplay, have started their careers in music venues in Camden Town. Roundhouse, Koko, Electric Ballroom and Proud Camden have all hosted their fair share of gigs, but it’s the small stages of pubs like Barfly (Permanently Closed) that have now become the go-to for the some of the best alternative live music in the city.

Camden is probably one of the only neighbourhoods in London where nobody cares about your fashion sense. Here everything goes! This freedom of expression in fashion and design led to the development of some of the best and most unique markets in all of London. Camden Lock Market, known as an arts and crafts market since 1970s, is home to over 100 stalls ranging from jewellery and clothing to food and drinks. Camden Stables Market, located just up the street from Camden Lock, is the spot for unique looks, alternative fashion trends, interior design, books, and multicultural cuisine. Camden Lock Village, located just across the street, houses 500 stalls of unusual gifts and accessories, and the Buck Street Market offers more main stream fashion, accessories, and footwear.

Camden is home to some unique pubs, bars, and restaurants in London. For a good pint of beer with an atmosphere, check out Elephants Head, frequented by Camdens’ rockers and football fans alike. For something with a bit more edge, pop into Our Black Heart, a rock and roll watering hole with live music and images of Jesus Christ alongside skulls and skeletons.

For a unique dinner experience, you can head to the African Shaka Zulu, or the Pan-Asian, Gildamesh

Camden Town buzzes with interesting people and alternative lifestyles. Best visited on the weekend, it’s a great place to learn about alternative culture in London, to people watch, and to feel the vibe of the local crowds. 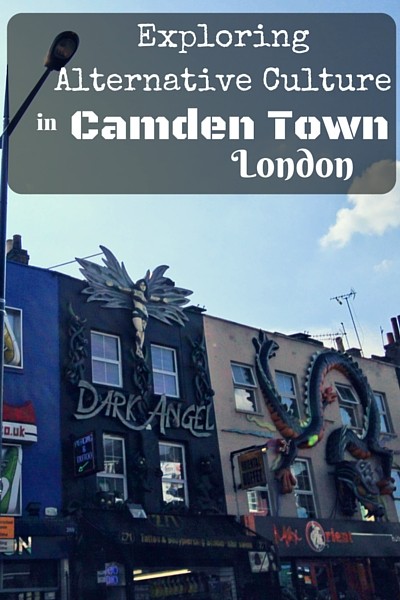 Have you ever visited Camden Town? Share your experiences with the others by leaving a comment below.