As the bus sped along, often reaching speeds of 120km/h, all I could see on either side of me was red dirt. This was the second day of our Uluru tour to see the elusive Ayers Rock (or Uluru as the Australian Aboriginals refer to it) and the air conditioning in our minibus was still not working.

I looked in the direction of my mother and I could see that even she, a self-professed warm climate junky, was not enjoying the 40°C+ inside the bus. The mood on the bus was rather somber.

After going through day one of our journey without air conditioning, we had been told that we would switch vehicles with the other group for the second day. Needless to say, we never did.

Just as I was starting to nod off I heard the tour guide Aaron speak up “We’re almost there guys, if you look out the right side there in the distance you will see Uluru”.

We were finally here, and what a grand sight it was.

Many consider Uluru the 8th natural wonder of the world.

Uluru is located in the middle of the Australian outback near the geographical center of the continent. It is part of the Uluru-Kata Tjuta National Park.

The red rock monolith and surrounding area are considered sacred to the native aboriginal peoples.

Uluru is almost 350 meters above sea level and 3.6 long making it higher than the Eiffel Tower in Paris. Its base reaches about 2.5 km underground.

It was back in 2010 when my mother and I had decided to see Uluru last minute. We were originally planning on going up to Cairns to see the Great Barrier Reef, but a last-minute cyclone in the area forced us to come up with a Plan B.

We found a good return flight from Cairns to Alice Springs (convenient, considering that we already had a flight to Cairns) and decided that an Uluru tour was meant to be.

In our rush to find a last minute itinerary, we stumbled upon a tour company called The Rock Tour. The company offers trips ranging from a single day Uluru tours, all the way up to 30-day tours of the outback.

We contacted their offices a few days before and scored a 3-day/ 2-night Uluru tour from Alice Springs and back.

Our day began at 5 am, and by 5:30 am we were lumbering onto our Uluru tour minibus. Our first stop, 5.5 hours later, was Kings Canyon, part of the Watarrka National Park which sits on the western edge of the George Gill Range.

Here we got to enjoy a guided 3.5-hour hike through the sandstone domes of the Lost City, visiting natural Amphitheatres, the North & South Walls, and the beautiful Garden of Eden.

Throughout the hike I stuck to the front of the group, walking alongside our guide Aaron who shared Uluru facts, plus the history and stories of the land. It definitely made the trip pass by quickly.

Before I continue, I thought I would mention the black flies. Oh man, the black files.

I had experienced black flies before while working at a camp north of Toronto. But the black flies in the Northern Territory were on a whole new level and blackfly nets were a must (later we discovered the same is true for Western Australia).

If there is one thing you need to bring on an Uluru tour, it is a blackfly net.

After the hike at Kings Canyon, we were off on the bus again heading towards Curtin Springs, our Uluru camping spot for the night. It was at this point that we discovered that our minibus air conditioning has decided to not come along for our Uluru tour.

The heat was unbearable, I would wager it was north of 40°C and opening a window only meant that the hot air hit your face harder. Everyone on the bus was complaining. It was decided that we would switch buses with the sister group the following day.

We had a quick wash and toilet stop at the Curtin Springs cattle station before setting up our Bush Camp. We all relaxed around the fire while our guide prepared a healthy camp-oven dinner. After trading stories, it was time for bed and to tuck into our swags (a combination of a mattress and sleeping bag that is common in Australia.)

On day 2 we took off shortly after sunrise heading towards the Ayers Rock Campground for a quick shower and toilet stop before making our way to The Olgas. A group of rock formations rising out of the desert.

It was at this point that we first got to glance at the marvelous site of Uluru. But Uluru was not until day 3, up first was a guided walk through to the Valley of the Winds at Kata Tjuta.

It is at this point in the journey that we were meant to switch buses with the other group. Needless to say that never happened, a few fake heat strokes later and the leaders of the tour didn’t want to deal with the other bus revolting over having to switch.

After the morning hike, we headed off to the Aboriginal Cultural Centre where we listened to tales from the ‘Tjukurpa’ Dreamtime.

We spent the evening enjoying dinner and a spectacular Uluru sunset and were treated to one of the rarest sights possible, lightning over the rock. I wish I had a great photo to share, but since this was many years back when I was still shooting with a point and shoot, I simply couldn’t capture the sight.

Nonetheless, an Uluru sunset is a must-do, lightning or not! Watching the sky light up behind Uluru rock is an unforgettable experience.

We spent that night at the Ayers Rock Campground.

Day 3 was THE BIG DAY, the day we got to visit and walk around Uluru. Several people in our group suggested that we climb the monolith. However, our guide discouraged everyone from doing so after explaining it was sacred to the local Anangu peoples.

In the Anangu indigenous culture, ancestral beings live on in sacred places like Uluru. So instead, our group did the Uluru Base Walk.

The walk was approximately 10 km and took us around 3 hours to complete at a leisurely pace, snapping pictures and soaking in more stories and Uluru facts from Aaron.

Along the way, we got to see several beautiful spots alongside the rock including the Mala Walk, Mutitjulu Waterhole, and a few Aboriginal cave paintings.

After the base walk, it was back to the sticky and hot bus for the 6.5-hour ride back to Alice Springs. There was plenty of time to sit back and reflect on the trip.

Our Uluru tour and particularly our amazing guide made for a fantastic trip!

If anyone is wondering whether they should jump on a plane and head out to see this unique rock in the middle of the desert, we would say go for it!

You only live once and you have the opportunity to learn a lot about the aboriginal culture that you may not get elsewhere.

Uluru is located 450 km by road from Alice Springs, the only city with a large airport nearby. Some people fly straight into the Ayers Rock airport, but these flights can often be double or more than the cost of flying into Alice Springs. From Alice Springs, Uluru tours are abundant.

Flights are available from most major cities in Australia into Alice Springs. For the best prices on airfare book with a budget airline like Jetstar and Scoot Airways, instead of the full-service airlines like Qantas and Virgin.

Alternatively, Webjet.com.au is a great place to search for domestic flights in Australia. For more Australian travel tips click here.

You can choose to drive to Alice Springs or Uluru but, trust us, it is going to be a long drive and should only be attempted by those that have PLENTY of time. Think more than 30 hours from Sydney, or over 25 hours from Melbourne to Uluru.

Visiting Uluru is best done with a tour. Particularly because your guide will give you insight into the lives of the local community and history that you wouldn’t otherwise be privy to. It makes the trip really special.

Most tour operators offer a visit similar itinerary to the one that we did with The Rock Tour. Alternatively, tours start and finish at Uluru rather than in Alice Springs, or there are 1-day tours from Uluru.

As advocates for sustainable travel, we always urge readers to choose sustainable tour operators when traveling. Responsible tour operators offer similar options to other tour companies but will incorporate a lot of the general principles of ecotourism into their mission. They will make the environment and local community a priority and involve themselves (economically, socially, and culturally) in the town or country they are located.

In the case of Uluru, responsible tour operators urge clients not to climb the rock and generally make every effort to respect the environment and its cultural history.

Accommodation is few and far between in Uluru. There are no Uluru resorts, instead, camping and Uluru hotels are common accommodation options near the sacred rock formation. Always book your Uluru hotels in advance.

Sails in the Desert is among the best Uluru hotels. They offer modern, upscale rooms and they are located just a five-minute walk from the Uluru lookout, which is a great place to enjoy an Uluru sunset. There is a pool, tennis courts, and a spa on-site.

Outback Pioneer Lodge is among the only Uluru hotels that offer dormitory style accommodation as well as private rooms. The basic accommodation offers a shared kitchen, BBQ facilities, and a pool.

Have you visited Uluru before? Would you recommend it to other travelers? 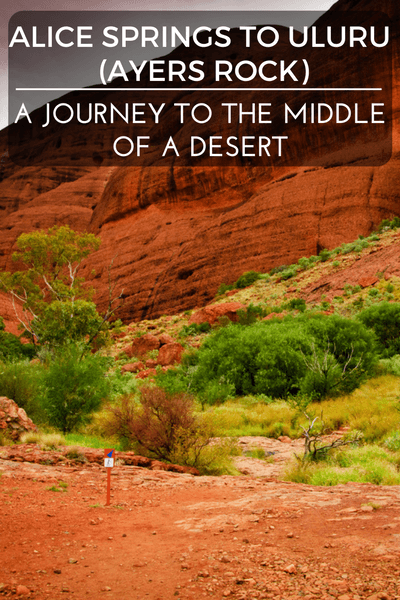 Disclaimer: The Rock Tour generously hosted my mother and I on this 3 day/2 night tour, but the opinion is as always my own.