30 Things You Didn’t Know About Max

Today we are celebrating Max’s 30th birthday and it’s a perfect day to put him in the spotlight! Since some of you have mentioned that you’d like to learn more about Max, I thought today would be the perfect day to share a few random facts that you probably don’t know about him.

1. Max is a proud owner of 3 passports. He’s an official citizen of Canada, United Kingdom, and Australia. He was born in Canada, inherited his UK passport from his mom, who was born in London, and earned his Australian passport after living in there for 6 years between 2009 and 2015.

2. Max grew up without a father. His mother is a very independent and strong woman who never married and managed to raise Max and his sister completely on her own.

3. Max was born in Canada, but at the age of 2 moved to Costa Rica, where he spent the next 10 years of his life.

4. English is not Max’s first language. He learned to speak and write in Spanish first before moving back to Canada because he and his sister were forgetting English.

5. In order to get to school in Costa Rica, Max used to have to catch his horse and ride it for 6 kms to get to school. If he couldn’t catch the horse he had to hitchhike or walk.

6. Max is a big animal person. He may tell you that dogs are his favourite but if you ever see him playing with our cat Mia you would easily label him as a cat lover.

7. Growing up Max had a rescue pet pizote (also known as coati) who wandered into their home in Costa Rica after falling out of his nest.

8. Max never graduated from Grade 8. His mom left Canada for a job in the US at the end of his Grade 8 year and since Max couldn’t stay in Canada, he was sent to Costa Rica to spend 6 months living with their family friends outside of San Jose.

9. Max has not lived in the same city for more than 4 years.

10….But he has lived in 4 different countries (Canada, US, Costa Rica, and Australia)

11. Max’s is a huge basketball fan. He cheers for the Toronto Raptors, but knows stats, facts, and details of, what seems like, every game, every team, and every player. He doesn’t ever let our travels interfere with important basketball games. If that means he has to sit outside of McDonald’s in a foreign country to stream a game on his phone, he’ll do it!

12. … and he doesn’t just watch. Max played basketball all throughout high school and University and when he moved to Australia, he played in the Queensland Basketball League.

13. At the age of 8, Max got a scooter for his birthday. He learned how to ride it, but ended up crashing it 8 months later.

14. He has never taken a driver’s test. He got his G1 (learners license) in Canada when he was 16 but when he moved to Florida he converted it to a full license without ever taking a road test.

15. The first movie Max watched in theatre was Jurassic park.

17. Max has an incredible memory, which comes very handy considering that I struggle to remember what I had for breakfast yesterday.

18. Max never stops learning. He does not read a lot of books, but he’s always reading articles on the most random topics to broaden his knowledge, to dig deeper into topics he’s interested in, or to understand and be able to explain random facts to anyone that will listen.

19. Max traveled all around Costa Rica, US, and Canada with his family, but his first solo trip abroad was to El Salvador with Habitat for Humanities in 2002.

20. Max will eat just about anything, but his favourite dish is Pad Thai

21. …and his favourite country just happens to be Thailand

23. If you ever meet Max in person and want to buy him a drink, Rum and Coke Zero is his drink of choice.

24. If you are hanging out at a pub, he’ll be drinking Belgian Wheat Beer.

26. In 2011, Max jumped off the highest bungee jump in the world in Queenstown, New Zealand.

27. Max moved to Australia in 2009 to pursue his Masters in Business Administration (aka Masters in partying on the Gold Coast).

28. Max’s favourite website/app is NextDraft (look it up).

30. The top country on Max’s travel wish list is the Republic of Congo. 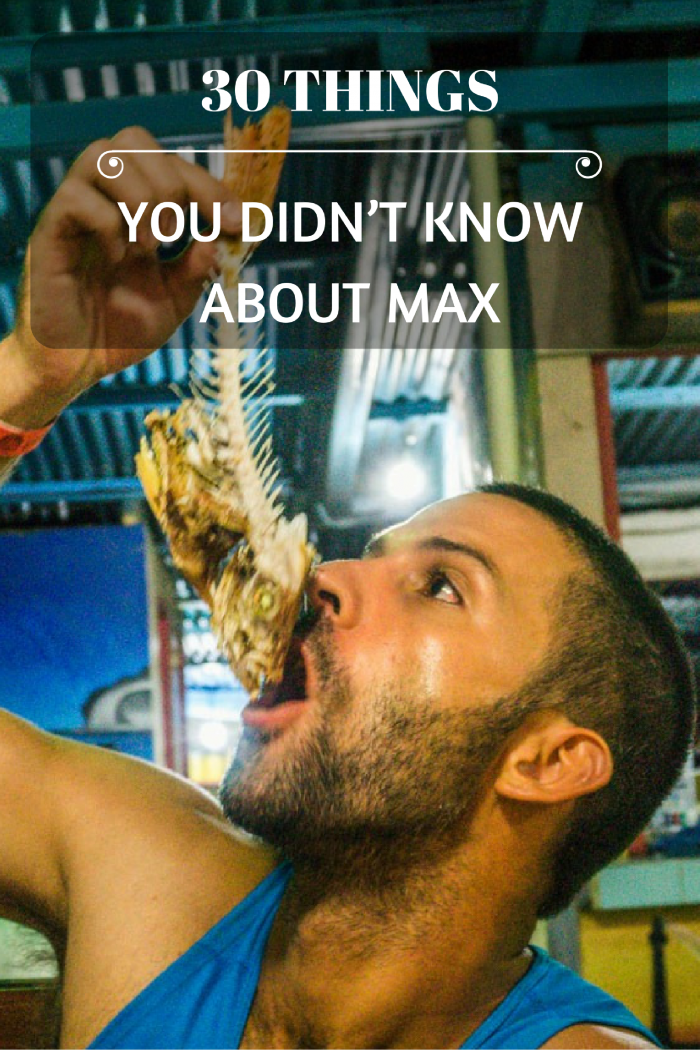 Can you relate to any of Max’s quirks and interesting facts?

3 thoughts on “30 Things You Didn’t Know About Max”