10 Reasons Why You Should Travel To Australia

After spending years of living in Australia, discovering many of its nooks and crannies, and exploring the country as locals,  we are convinced: there is no place like Australia!

Only in Australia, can you experience the diversity of deserts, mountains, beaches, rainforests, alongside hip modern metropolises that are constantly being ranked as the most liveable and enjoyable cities in the world.

It’s this variety of activities, sights, and attractions that make Australia so appealing for all types of travellers, from families looking for fun in the sun, to singles looking for adventures, and everyone in between!

If Australia doesn’t occupy a top spot on your “must visit” list, here is why it should!

1. Australia Has Some of the Most Beautiful Beaches in the World

Whether you are after a relaxing holiday or are looking for a more adventurous seas side escape, Australia has you covered. With over 10,000 beaches across the country, finding one that suits your needs isn’t hard.

There is Sydney’s famous Bondi Beach, known for its buzzing atmosphere and great people watching. It’s crowded 90% of the time, with the exception of cold winter months, filled with tourists and Australians from all over the country. It may not be the nicest beach in Australia, but it sure is the most iconic.

If you are after azure waters and jaw-dropping beauty, then there is the Whitehaven Beach in Whitsundays with the whitest, softest, and purest silica sand you’ll ever walk on.

And then, of course there are beaches on the Gold Coast, like Coolangatta or Burleigh Heads, known for the best surfing, kayaking, paddle boarding, and other water activities. If you can’t sit still, these are the beaches for you!

And if you are willing to get off the beaten track, then you simply must visit Cable Beach in Broome! Flawlessly flat, 14 mile long beach is the perfect place to catch the rays during the day or ride away into the sunset on a camel back.

2. There Are Hundreds of National Parks and Rainforests to Explore in Australia

The Godwana Rainforests of Australia, a UNESCO World Heritage Site, contains the most extensive area of subtropical rainforest in the world. Occupying over 350,000 hectares, the area consists of over 50 reserves and national parks, stretching from Newcastle to Brisbane. This area is home to some to the most ancient flora and fauna in Australia, making it an incredibly unique natural wonder.

And if that wasn’t enough there are other rainforests and national parks sprawled across the country, from the wet tropics of the Daintree National Park in Northern Queensland, to the Blue Mountains in New South Wales, and cool temperature forests in Tasmania’s wilderness.

From Australia’s highest mountain, Mt Kosciuszko (2228m), in Kosciuszko National Park to impressive series of historic volcanic peaks of the Glass House Mountains in Queensland and Mt Warning in New South Wales, the mountain that receives the very first rays of sunlight in the country, there are plenty of peaks worth conquering in this country.

Australian mountains are often overlooked by the international explorers, but the impressive list of Australia’s Top 10 Peaks offer plenty of adventures for the outdoor enthusiasts. And don’t worry, you won’t have to train for months to reach some of Australia’s best and most renowned summits.

It’s not a myth, Australians do love their surf. And how could they not? Australia’s surf spots are some of the best in the world, attracting enthusiasts and pros from all over the world. Bells Beach on Great Ocean Road in Victoria, Snapper Rocks on the Gold Coast in Queensland, Byron Bay in New South Wales, and many other spots in Newcastle and Sydney, all offer amazing surf breaks.  Surfing is a part of the culture here and it’s contagious.

Spend some time on the beach in Australia and you’ll be blown away by 5 year old kids fearlessly riding the waves. They’ve been at it for years, so it’s about time you give surfing a try. Surf schools are dotted along the coast, turning surfing into a bucket list activity for many visitors.

5. Australia’s Wine Regions Will Impress Even the Fussiest Wine Connoisseurs

Australians have been producing wine since 1788, when vines first arrived in Australia with the First Fleet. Since then over 100 different varieties of grapes have been planted in Australia, with the most important ones being Riesling, Chardonnay, Semillon, Muscat, Shiraz, Grenache, Cabernet Sauvignon and Pinot Noir. Today, wine and food trails are plentiful in Australia, allowing you to explore and discover the best food and wine offerings across the country.

Choose to spend some time sampling award-winning wines in Barossa Valley region in South Australia, which is particularly known for its Shiraz, or the Hunter Valley region in New South Wales, famous for extensive plantings of Chardonnay, Cabernet Sauvignon, and Semillon. Or take a day trip from Melbourne to Yarra Valley, another wine regions known for exquisite Chardonnay and Pinot Noir.

The breathtaking views, fresh local produce, wildlife and, of course, countless wineries are bound to be the highlight of trip for any wine connoisseur.

6. You Can Come Face to Face with Unique and Exotic Australian Wildlife

Australian exotic animals are a big draw for many travelers. Public and private zoos and natural reserves across the country make it easy to learn about the mammals, reptiles, fish, and insects that populate the Australian continent.

But the best part about Australia is that its animals can be found well beyond the zoos. Kangaroos and wallabies roam wild in most national parks and are particularly plentiful on Kangaroo Island in South Australia. Koalas hang on eucalyptus trees along the road and emus are frequently found in rural areas in the outback.

Need we even say more? The world’s biggest single structure made by living organisms and the world’s largest coral system in the world is found right here in Australia.

Composed of over 2,900 individual reefs and 900 islands, the Great Barrier Reef is visited by over 2,000,000 people per year. It’s a spot on every divers bucket list and for a really good reason. The Reef supports an incredible diversity of life. Over 30 species of whales, dolphins, and porpoises alone have been recorded in the Great Barrier Reef. Then, of course, there are over 1,500 fish species, sea snakes, turtles, and other life.

For many, a dive in the Great Barrier Reef can change their perspective on the world forever.

7. Australia is One of the Best Countries in the World for Sports Enthusiasts

Sport is at the heart of Australian culture. Whether you are a cricket follower, a football fan, a rugby enthusiast, or perhaps you prefer to watch a tennis match, or a day at the races, there are plenty of choices here in Australia for everyone. Of particular interest to locals is Australian Rules Football, that has been played in every state and territory of Australia since 1915. Is it the most spectated sport in Australia, with average attendance of around 30,000 per game.

There are a number of professional sport leagues in Australia across many other sports and thus plenty of events for spectators to attend. And if locals sports aren’t enough to satisfy your sports needs, then you can always time your visit with one of many other International sporting events that take place on Australian arena, like the Australian Grand Prix (Formula 1 Race), or the Australian Open (Tennis).

9. It is Also an Amazing Place for Music Lovers

There are hundreds of music festivals in Australia, featuring acts of all genres. There are laid back blues festivals, where you could expect to chill out to the tunes of Jack Johnson or Dave Matthew Band, alternative festivals, headlined by the likes of Phoenix and Foo Fighters or Red Hot Chilli Peppers, and electronic festivals, with the biggest DJs in the world, like Tiesto, Skrillex, or Deadmau5 performing simultaneously on multiple stages.

There are also plenty of smaller festivals popping up in every region throughout the Spring/Summer months. There is trully something here for everyone. Festivals range from a few hours, to 4-5 days with camping accommodation and other activities to entertain the young and the old(er).

10. Australia is an Easy Destination for First Time Travelers

The reality is that Australia is one of the furthest countries from EVERYWHERE, making it harder for many to explore this beautiful country. But the truth is, despite being so far away, it’s actually one of the easiest countries to explore for first time travelers.

– It’s easy to find accommodation. With an abundance of hostels, hotels, campsites, apartment rentals, and even house sitting options, there is plenty of choice, regardless of your budget and travel style.

– Australian food isn’t much different from what you are probably used to back in North America, or Europe. It’s nothing like Asia, or India, unless you want it to be. In which case, the multicultural flavours and renowned chefs from all over the world can be easily found in big cities.

– It’s clean. Don’t mind the occasional spider or lizard, the country is clean, it’s safe, and it doesn’t require you to get a long list of vaccinations. (Unless of course, you are coming from a country that poses a health risk)

– It’s friendly. You’ll meet people from all over the world traveling Australia just like you are and locals will be more than happy to help you out, point you in the right direction or take you under their wing. 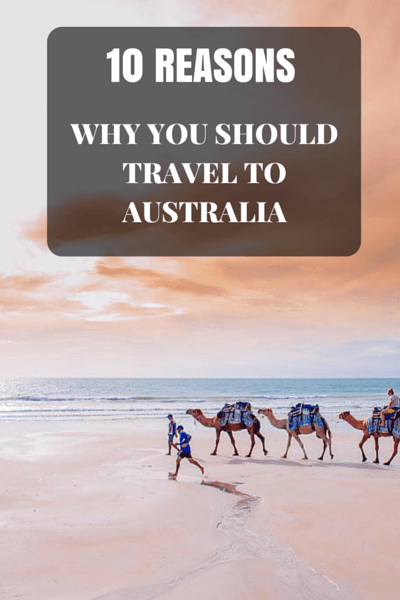 Ready to start planning your trip to Australia? Read these next:

10 Things You Need to Know Before Traveling to Australia

Top 10 Things To Do in Australia

Getting Around Australia on $1/day

What I Didn’t Know About Australia Before I Moved Here

Have you been to Australia? What other reasons would you add to this list?

18 thoughts on “10 Reasons Why You Should Travel To Australia”